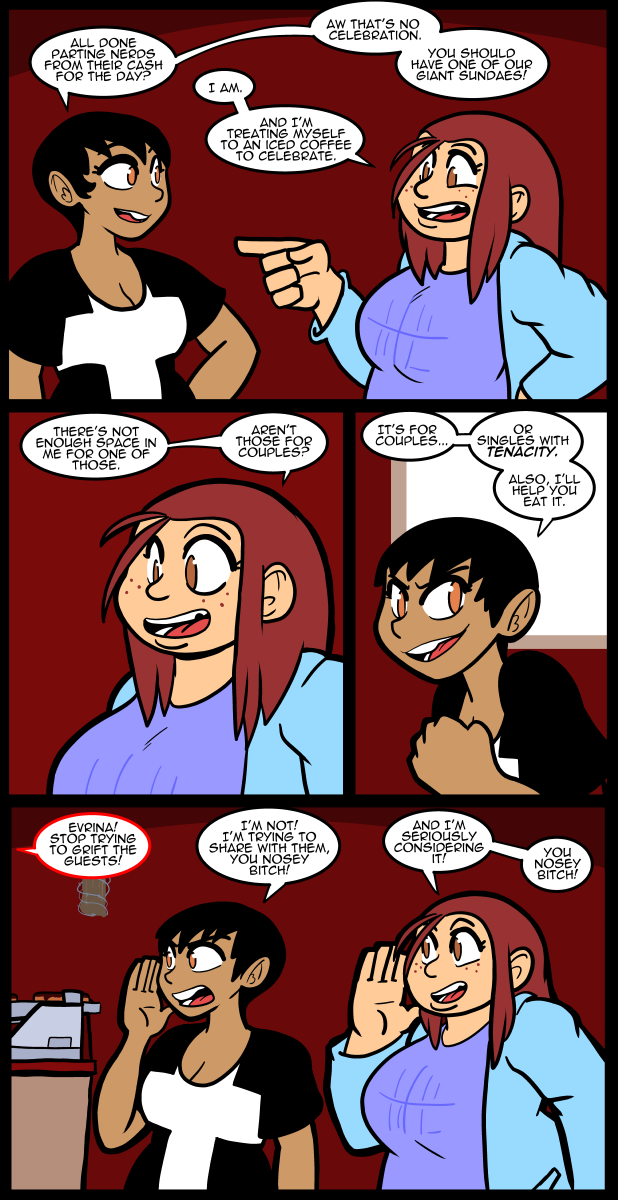 I imagine they’ll mention it at some point, but Rulette’s & the coffee shop Evrina works at, whose name escapes me at the moment, are both in the old main street area of the town. It’s sort of like business purgatory for small towns, if you’ve never been to one. Technically both businesses are in the same old hotel structure but are at opposite ends. So they are sort of like business roommates. Of course Rulette’s has been in the same space, although under a different name, for much longer.

Chasm is in the eshop for the Switch & it looks really good. I have a memory of someone mentioning it. It looks like something I could very much enjoy… My understanding is that the game is somewhat hampered by the randomization of the areas though. Still, it looks like a lot of fun. I’m putting it on my list and gonna research a bit I think.

And thus my vocabulary has been expanded today to include “Grift”

It’s probably already in your vocabulary, but, “subversion”, is another fun word to know. :)

I think my favorite sub version is the Nautilus ;-)

Another term for lazy jarheads is- sub marines.

Wow, this is turning into a real deep dive into seamen …

The guy who repairs my scuba suit, says that I blew a seal….

You ought to whale on that guy for suggesting that an upstanding gentleman such as yourself would go down so fur!

You’re quite right.
He otter not act like that! :)

Just fix the damn thing and leave my private life out of it, okay, pal?

When everything goes south, pear shaped, down the crapper, etc- I like the phrase sub-optimal to describe it.

Yes. Subversion is a distributed revision control system, if I recall correctly.

Found it. I think the cafe that Evrina works at is named: God Be With Brew.

That’s bean used (multiple times if google is to be believed) — e.g. http://www.holygroundscoffeeandtea.com.

My computer has not been the same, since I put Java in it!
(Should I have left out the cream + sugar?) :)

I got that.
Another fun term is graft, … As in grifters and grafters, and lawyers, oh-my!

You know the rules we can’t fight on holy grounds. There can be only one coffee.

I think I’ve covered most of the puns. Most of them. Golf clap for myself.

I wonder if there’s a coffee shop in Germany, named- Cream and Luger ?

DI I meet you in the famous coffee place in Sevilla, Spain: Cafe Ole?
Or was it the Swedish tea shop; Ja you bet Cha?

Which may only be funny in Minnesota…

I’ve been to Cafe Ole.
It reminds me of the Coffee house on the Army base: “G. I. Joe”.

“golf clap”, Is that an STI endemic to putters?

Good job, that was well written. I totally got the grinning snark of the last comment.

That was me back on #1900. Like I said there, I probably have a fair chunk of positive bias, because I backed the Kickstarter, but it could hit a sweet spot for you, too. So long as you’re checking out reviews, I don’t think it’ll throw too many extreme curveballs your way.

Rulette is going to be one hell of a Dungeon Master.

So…she suddenly stopped talking with Ed, started T-posing and clipped all the way to the cafeteria in the short period that was Carol’s fuck?

you are aware of how time can work in comics right?

Yes! All ten of them!

Wow, she sure went through that box of Twinkies!

I need a full body view just to make sure…

Answering a thing Jackie said, on twitter, about BH: I think the Disney film, the Black Hole is being talked about much…online, since the TCM channel has just said they’re going to show BH, + other Disney “treasures”/films, this month. *Shrugs*

Yes, Black Hole was the movie that proved to me that “Uncle Walt” wasn’t in charge anymore. *sigh*

Oh my evil little darling Evrina is finally back.