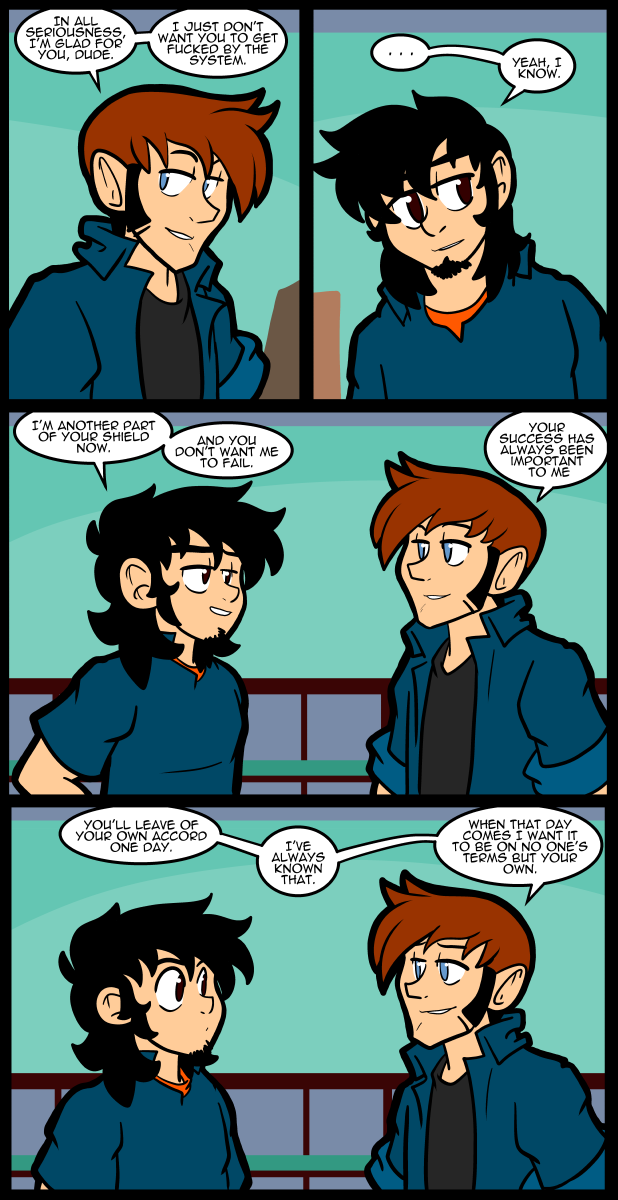 Thomas orchestrated John’s promotion without ever telling him, in case you forgot. In order to keep Carol out of harm’s way.

I bet if Carol ever finds that out she’ll not be best pleased.

Could I get a link to the page Thomas orchestrated John’s promotion, or Thomas’s motivation for doing so to protect Carol is revealed to the reader. I just want to go back and re-read those bits, as my memory is fuzzy on that.

If I’m remembering correctly, Thomas kept Carol appraised of his orchestrations and they talked about it. I think he had to talk her into turning it down or something?

Sounds like a great reason to reread the archive.

It’s always smart to have allies at work.

I think it’s supposed to be “shield” in third panel.
Sorry for that

Ah, yes, young Padawan, you now see that *I* am your Master, and I have *always* had my student’s best interests in my heart. This is my show and you have always been just an actor in it. But, my posing as your adversary has made you strong–your strength has received notice, — I am pleased.
–to Jackie: my gosh you did that -downing realization- well. I can see the gears turning in his little brain. That’s animation!

Welcome to the reality of lower management, John. Enjoy your brief stay.

I never understood how anyone could hang out at the Supervisor level. Manager, sure, since that’s middle management, but Supervisor/Team Lead position always seemed like a suicide position. Those positions are stuck between the workers (who may never be satisfied) and middle management (who is getting pressure from Directors who always want to muck with everything).

I watched once from another position as Manager in a different location a literal uprising of the workers against a Supervisor at a retail store, in which the workers lifted him off the floor as a crowd, tossed him in the trash bin, putting a heavy barrel on the lid so he could not get out, set the Supervisor’s car on fire, and trashed the store. When the police showed up, there was a riot in progress.

This all occurred because a Director above that manager decided to remove promised PTO and lower salary while raising hours. The Director had no reason to do that, other than to try and make impressive numbers. I hate that, and that’s why as upper management I do not muck with what works just to “make numbers” happen.

Sounds like the Director should have been tossed to the mob.

those two do seem to have yaoi eyes for each other in those panels.