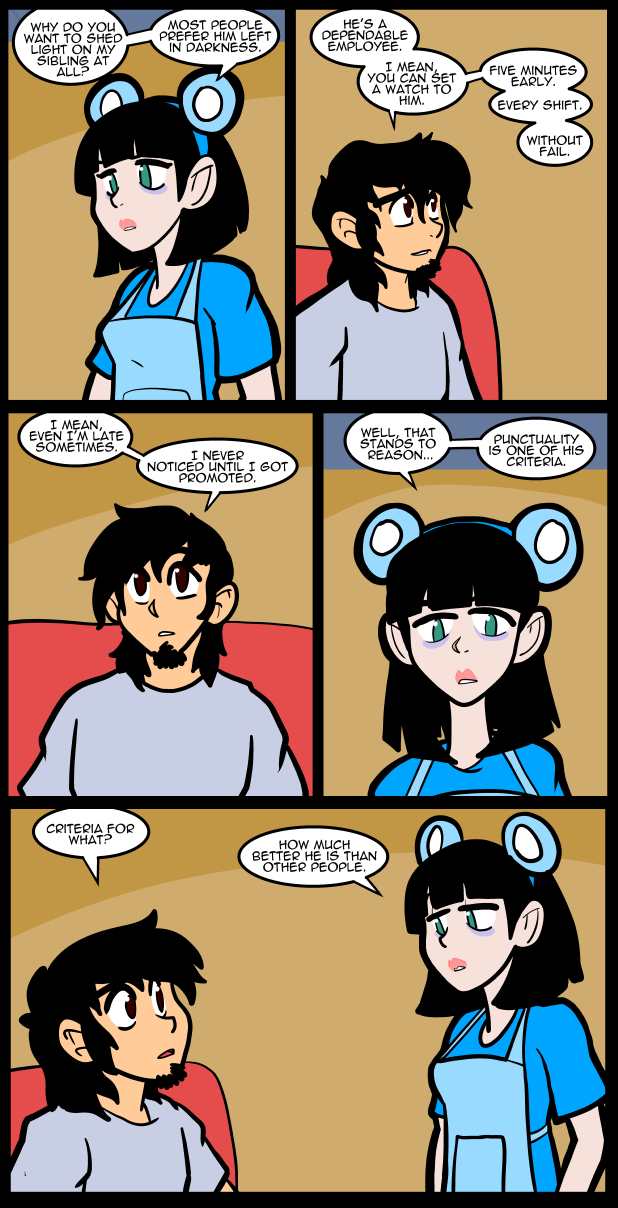 I think on some level all people have criteria for what makes them better than other people. Maybe you don’t think about it consciously, but everyone judges their worth based on whatever you value or don’t. I think how much of a jerk you are comes down, on some level, to your criteria.

The other day I stumbled across an old British sitcom called Mind Your Language. It’s so weird and dated, but also very British. Like, it portrays all other races and ethnicities in the broadest of stereotypes, but the fact that they have so many races and ethnicities sets it apart from American shows of the same time. It’s about a man teaching English at an adult learning center. It’s basically a constant stream of other people talk funny jokes. It’s not malicious, but it is, as I said, very dated. It’s worth looking up an episode as just an oddity if you enjoy seeing the evolution of the sitcom and whatnot.

Also the actor who played the lead role died in a mysterious way and his life was kind of sad in general.

Missing “you” in the first speech bubble. (just trying to help out, Jackie)

Definitely interesting to get a different perspective on Reggie, especially since it’s from a sibling. I know that Reggie has grown a bit since the start of the comic and I have to wonder how much he has changed in the eyes of his sibling.

My criteria are mostly in regards to treatment of other people, and then I feel bad because I’m failing to meet my own criteria because I’m judging someone by said criteria. It’s a vicious cycle.

Sounds to me like you can avoid violating your principles and judge all you want as long as you don’t execute any harsh sentences :-)

Reggie he’s like scrooge McDuck. Want to make his Fortune, doesn’t mind hard work, and is a bit of an arrogant jerk

are you saying he’s a… fowl person?

Heh, heh!
I dunno. How many times did he duck the income tax?

Someone should send in a quack team of investigators ….

I doubt we could afford the bill.

Well one up side of being poor is no-one expects you to shell out, but the down side is you can’t feather your own nest …

I was just thinking about actors who died in sad ways-
In the 1950s, Judy Tyler was in the Elvis film, “Jailhouse Rock”. (She was also in the Howdy Doody show, if you like cartoons, + kid’s shows].

I think Life magazine, during Judy’s career, did a photo-shoot, comparing her to 1950s movie greats, like: Grace Kelly, Marilyn Monroe, Elizabeth Taylor, and others.
Judy Tyler died in a tragic, car accident. She was in her early 20s.
a lot of people wonder what her film career would have been like, if she had lived a few decades more. A lot of people really like her.

How do we know that Reggie really exists?
Maybe it’s just Victoria, in a brilliant disguise.

But maybe it was Reggie/Victoria imagining that scene.

It would certainly explain that super nice dress worn to bake cookies-If I tried that, it would be a disaster.

But it would also be sad, because dissociative identity disorder.

For me, and I admit this makes me a horrible person, its an episode of Hoarders. I feel so much better about my life after an episode of that show. Course, I also feel like bleaching everything I my house, what that’s a side effect I can ignore. Well, least I can until I find myself cleaning my bathroom for two hours.

It DOES kind of help to look at the mess in your house and say, at least there aren’t any decomposing animals anywhere in my living room. It also does a nice job of motivating you to clean up, too, because you never want to get that bad.

Well, I don’t know about Mike. But if I was an employer (or even a small manager), I’d prefer an employee who’s not that punctual, but who’s actually doing their damn job.

Like, someone who _maybe_ sometimes arrives 15 minutes late because they overslept (and who doesn’t like to sleep… obviously), but then stays a little longer to make up for it. Not someone like Reggie, who is always on time, but on the other hand wants to screw everyone over for his own gain and is always plotting something in his little head.

As much as I like him, I think punctuality in his case is an empty virtue – makes him feel better, but in actuality means nothing. But we all know he’s blind to that. He’s still barely adding something called “positive value” to the company.
Of course, we know he’s there for different reasons – he’s useful to the staff in other ways…

I guess it makes me officially an oldnerd but I remember when OETA, an Oklahoma PBS station was running recycled episodes of “Mind Your Language”. I don’t remember being a huge fan so it was probably on just before or just after the forth Doctor or “Red Dwarf”. I’ve had Reggie like employees; kind of a dick but he gets the job done so you spend the effort to buffer his traits and keep the peace.

Whatever happened to “If you’re not 15 minutes early, you’re late”?

Are you sure this is a contest where winning is a desirable outcome?

Being better than Reggie is still a pretty low bar, don’t you think?

Some jobs really do need prompt attendance, but in general, nit-picking exactitude of attendance is overrated.

I once worked for an organization which had a number of what you could call “volunteer attendance monitors.” It wasn’t an official position. The way it worked is that these self-appointed busybodies would troll the office checking arrival times and they’d run to upper management to report all the laggards who came in 5 – 30 minutes late. Official work hours at this place were 7:30 am to 4 pm. I typically worked 8 am to 5 pm. My first evaluation at this org took place very early in my tenure since it took place at the same time every year no matter what. I was criticized for having “attendance issues.” I inquired if these selfsame volunteers took note of what time I left as well as what time I arrived every day. The answer was obvious, leaving a faint odor of embarrassment lingering in the room. I should have expected to pay a heavy price for my temerity, but after a year of productive output, my so-called “attendance issues” were never mentioned again.

After five years I moved from that org to another which coexisted with it under the same banner, but was at the time a separate business with its own management, policies and work rules. They were even allowed to wear jeans or even shorts and logo tee shirts to work and could come and go almost at will, although it was desirable to be present during “core hours” most of the time. Not only that, but exactly the same job title in the second org outranked its counterpart in the first org by one full step in rank.

Is that the song- Temptation, by New Order?

That’s right. Also reminds me of a girl.

For me, showing up on time, or early, to a job, was a sign of caring. If you care about the job, you care enough to show up on time. Naturally exceptions exist, but generally speaking. I used to always be a few minutes early, get clocked in, help get all the equipment set up for the day. Then management cut our staff in half, added to our work load, and has ignored numerous complaints about working conditions. Now I’m typically 5 minutes late. It wasn’t a conscious choice, but having noticed it I haven’t made any effort to change.