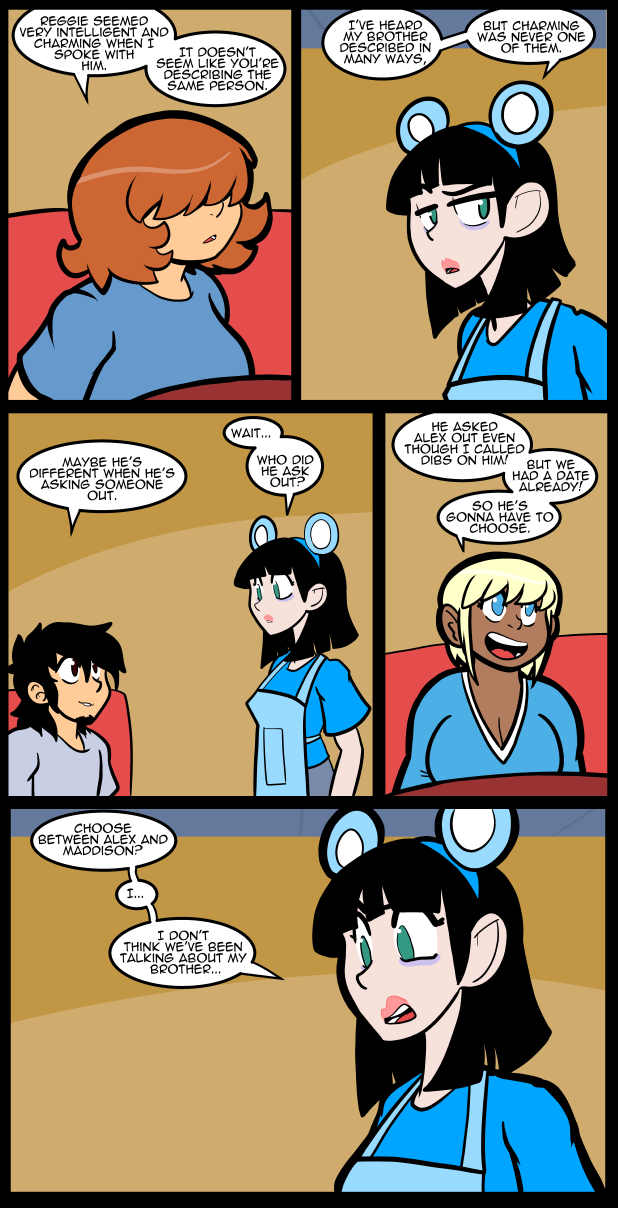 Alex has to know that no one can understand why Reggie would ask out a fatty. She’s smart enough to pick up on that. Maddison is slower on the uptake, obviously. To some degree, meanness and arrogance seems to go hand in hand with hating fatties. It can’t be true across the board, but it holds true enough to be the expected way of things. Being overweight is a weakness that can be used to belittle someone and that is catnip for the jerk. Reggie has made fun of Carol’s weight before, but she has certainly earned it, since she’s openly antagonistic to him as well. But really I doubt Reggie cares a whole lot about weight. He cares about sensing weakness and ways to crack the armor of his enemies/opponents. As a fatty I feel like we’re a little to precious about our weights generally. Or rather the vocal are and they get the attention. At the same time discrimination based on weight isn’t cool, but if someone calls you fat, and you are, just accept it. It takes the teeth from their bite.

Once, I walked in to a store and a little kid with his parents looked up at me and said “Wow, that guy’s fat!” Which I was, although I was probably 100 pounds lighter at the time. His parents were horrified when I met their gaze. But I just said “Well, he’s right.” and went on about my day. That kid probably got a talking to, but I still think the whole thing is funny.

It’s way harder drawing fatties than people realize I think. Like, you have to take space in to account so much more with a fat character than with a thin one. Physical interaction in particular is harder because bits touch all over and squish, so you have to pay attention to stuff you don’t have to otherwise. There are times where I really have trouble with the whole thing. Jo is so much easier to draw than Alex because she has so few moving parts. The petite are very straightforward. It would be unbearable drawing the same body all the time though so it’s not like I’m complaining. It’s just way faster to draw Jo. You don’t have to add a bunch of stuff to her.

No lady, turns out your brother is just carrying a very deep wound to the heart, and perhaps a little self resentment for what he believes is an inability to ever be worthy of a charming young woman who he clearly still carries a candle for.

Honestly, Reggies development since storytime ( and even before ) has been a delight in this comic, flaws and how we come to them and grow from them are what makes a character feel real, and its something all too often lost in web comics for fear of offending or stepping on toes.

I’m slowly tricking everyone in to loving Reggie.

“Loving” may be slightly overstating things…. ;)

Heh, you can love someone and still want to smack em upside the head [or strangle them – hi sis] for being a jerk.

Reggie is a bit like Jaime Lannister. You hate him at first but ends up one of your favorites later on.

Well, Reggie sure has its flaws, but he still seems to be a “decent” human being.

Maybe not one we like to hang around, but still, not being an utter asshole is still positive :)

Vicky hasn’t realized it yet, but she has in fact, entered the Twilight Zone.

Haven’t we ALL been living in the Twilight Zone for some time, though?

I mean, I thought we had collectively figured that out. Guess I was wrong.

Twilight Zone? I though we were at the Outer Limits ….. or the The Starlost ….

There is a theory(more like a meme) going that states that the world did in fact ended at December 2012 and that is why the world has made no sense since then.

Thank you so much for acknowledging the difficulty in drawing women of larger sizes. Here I thought you just magicked your way into it. I’ve checked at drawing places like Michael’s, only to find three separate books on how to draw furries and yet none on how to draw women that, I’m sorry, actually exist.

For that you need to look for the books on classical art or just about anything with respect to Leonardo da Vinci and his studies on anatomy and the human figure.

You only found three books on drawing furries? Either you weren’t looking too hard or they hadn’t restocked in a while.

Hit the nail right on the head when it comes to dealing with people out to belittle you. My personal favorite happenstance was when I was doing a snack run in a Goodwill-bought T-shirt (24 Hour Fitness, to be exact), and a guy in line clearly trying to sound witty to the young cashier (having been eyeing her since getting in line) said, “Right, like a fatty like you has ever been to the gym.”

I simply turned, raised a brow, and said, “You know, if you find me attractive you can just say so. You’re clearly paying close enough attention to my body.”

The cashier and the other two people in line nearly burst out laughing and the guy told me to fuck off before going to another line when the laughter just got louder. Got to have some fun small talk with the cashier afterward, which was nice.

Most jerks don’t plan their jerkish behavior, which makes it very easy and satisfying to turn it on them. The trick is to not get flustered; if it’s true, own up to it. If it’s not, you know that, and that’s all you need.

When I was living in Japan (mid-80’s) I was “out west” in a not-so-cosmopolitan area where foreigners were still an uncommon sight. It was a rare week when I wasn’t either mobbed by a group of middle-schoolers yelling “harro — harro” then running away, or a pre-schooler pointing at me and yelling “gaijin!” (“foreigner”).

This one time I was in the park with my co-workers and a little boy walked up, pointed at me and shouted “gaijin…gaijin!” I quickly grinned at the parents to let them know I wasn’t offended, then pointed at the boy and shouted “kokujin…kokujin” (“native”). The look of absolute shock on the kid’s face was worth it, as a chuckle passed through the crowd.

My hope is that the boy learned that day that our differences are natural and to be encouraged, and that he grew up to be a diplomat.

There is a humorous, web comic called- “Let’s Speak English”, by Mary Cagle.

The comic is about – how Mary Cagle, [in the 2017-era?], spent some years, teaching English, in an elementary school, in Japan.
I though you might like it, since it involves an American who goes to get a job in japan.
Sorry about the long post. I really like MC’s comic.

You might like a blog called Gaijin Smash as well, The adventures of a large black man teaching ESL in Japan. Very funny.

There is a humourous, comic book-like book, about dealing with common jerks, and people who like to be insulting.

It is- Don’t Let the Turkeys Get You Down by Sandra Boynton. :)

If the urban legends ar true, Snady forced Hallmark cards to start an entire new department called shoe-box cards, just to compete with one woman with both talent and imagination. I hope it’s true, she is one of my heroes!

She sounds very cool!!
I’ll learn more about her. :D

Isn’t the general attitude towards people’s weight shifting towards understanding nowadays though? Or am I still looking at this through rose-colored glasses and people still like fat-shaming?

On television and in films its getting rose colored, but the reality is much the same as it has always been.

I figured as much. Human beings judge by appearances no matter what the after school specials cram down our throats.

Better in the politically correct places, but in real life ™ too anything is fodder for ridicule. Too tall, too short, too fat, too thin, too I need my glasses to see, too smart, too classical, too country-western…. Jerks like to push buttons, it’s what they do, if you wanna save 15% on car insurance, wait… Wrong frame f reference. Sorry.

Jerks like to push buttons because it gets things done. These people are the real success stories because the general public admire those who are tenacious. It’s practically organized counter-productivity.

I wish I had as much hair as John has.
…in the same place, that is.

I had to laugh at the last panel! What Victoria must be feeling… XD