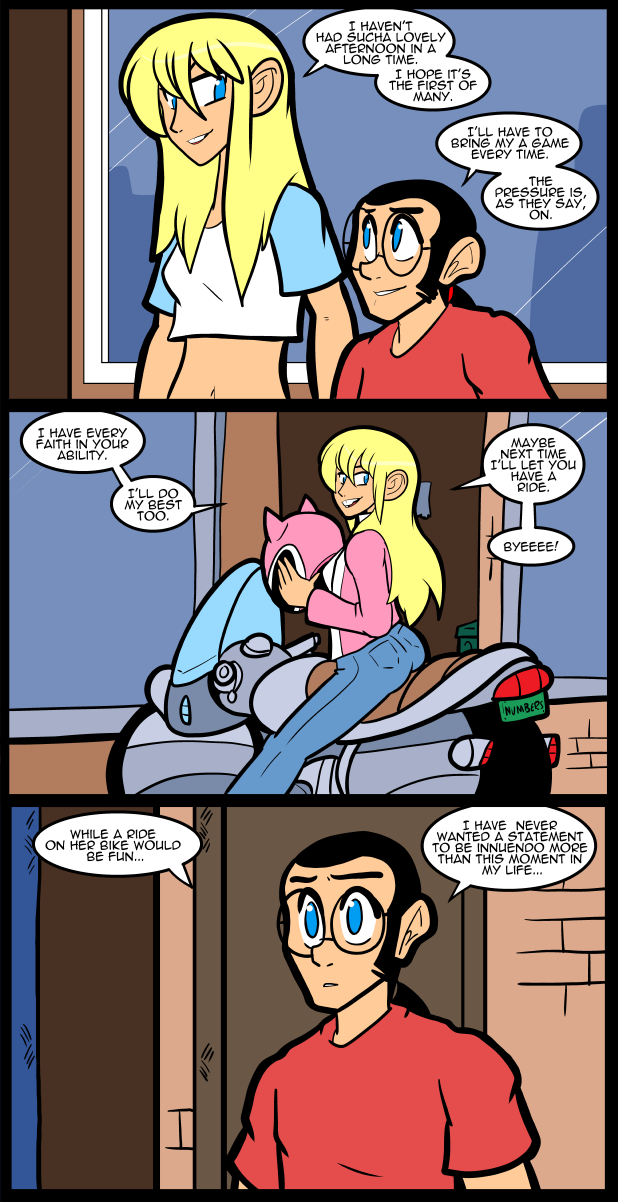 Oh carbs, why must you make me want you while also trying to kill me? You’re evil carbs, evil I say! I’m real sick of your shit.

Anyway, it’s been a while since we checking in on these lovebirds. Tweet tweet motherfuckers. That motorbike is going to be a thorn in my side for years I expect. I’ve never liked drawing cars and stuff. I’m not super interested in them. Never been a car enthusiast. I get how it works since I enthuse about other things, they just aren’t mine. Most media has teams of people who are experts in a given area. You have your people guy, your building guy, your car guy, or whatever. It makes things so much easier and faster to do. Manga usually has at least 9 team members. American comics vary a bit more, but 2 or three is not uncommon. anyway, doesn’t matter.

I finally got myself a credit card like a big boy. I’ll have a little bit more protection between my bank account and evil. It’s not much but it’s something. I chose one that will earn points or whatever, on Amazon since I use it the most. Maybe I can get a new surface with them like my mom did with hers.

Congratulations, you’re officially better at drawing people from behind than Lar DeSouza.

That’s not a very high bar…

Would you prefer the 1970s, hippy cartoonist, Mr. Vaughn Bode, instead?

Well, yesterday’s page featured some of the furries in the comic. I had anticipated a bit more from them today.

It doesn’t matter. I will link my friend’s YouTube channel, anyway. Well, friend is a loose term in this context. I haven’t seen him in about two decades, and I haven’t talked to him on the phone in roughly the same amount of time.

From what I hear, I do believe he does commissions, but I can’t find any information on his YouTube channel. Apparently, he has a Fur Affinity account. I have no use or desire for going there, so you’re on your own.

If you’re interested in upgrading tools, I saw this https://www.storexppen.com/buy/artist-series-display16.html and I think it’s worth a look. Pretty good alternative to the Cintiq and at a pretty good price too. I’m thinking of starting a patreon to try to snag one of these.

I appreciate the info, but I really like the Surface as my all purpose computer. It’s so much better than my old cintiq.

Do you ever want to buy the gigantic Microsoft Surface Studio ever in your future? Or is something that size not what your looking for?

Link to the product if you have never seen it.
https://www.microsoft.com/en-us/store/d/surface-studio/8xcw9bbpvfv9/5T1N?activetab=pivot%3aoverviewtab

That looks too big to hold easily.

It’s not meant to be held. It’s meant to be a desktop Surface. So you could sit at a desk and illustrate your comics. Not everyone likes to do that, but the surface studio seems to be what most professional drawing companies like Disney have.

Unfortunately with my leg I can’t sit at a desk to work. I have to sit on the floor or stand. Although if I had a low desk it would probably work. I work better when I can hold the screen though.

Is it really comfortable to draw against those stands? The position seems a bit unnatural to me, but then I’m just a bystander.

I didn’t need a combined computer/drawing surface, so I got the Ugee 2150. I was finding my Cintiq 12 to be a little small, and this was a good upgrade, and way cheaper than a comparable sized Wacom. I do miss the dedicated airbrush pen I had, however.

Oh Ed your in love. What can I say but gentlemen prefer blondes.

Correction: Gentlemen prefer ladies of high intellectual and personal quality. As it happens, Nina is a prime example of said qualities. ^_^

Did you use reference for the motorcycle? Because it looks like some kind of crazy sci-fi Akira bike thing. I like it.

It’s basically a crap version of a dragonball style bike.

I really want that license plate as a vanity plate. i may do that next summer (esp. since i renew my plates in october and its friggin’ cold)

When I saw the plate I just thought of it as a funny take on the idea that license plates have numbers on them – but your comment cast it in a new light, i.e. NUMB-ers. Having lived in several really cold places I’m certainly familiar with getting numb from the cold and when you ride a bike (or moped) the wind causes the effective temperature (aka wind chill) to be even lower, and numbing.

I, at least, do not know the difference. It’s supposed to be a lean-forward style motorcycle (as opposed to something like a Harley), and that much is obvious. Beyond that, detail is irrelevant unless motor stuff is a major plot element (a la “Misfile”). :)

What little drawing I do that is not “Drafting” I kinda … okay its not kinda, it’s full blown cheating in the eyes of my formally art trained siblings …. I find an image I like that fits the scene and just trace it and then attempt tweak it.
With freeware 3D model programs out there now I have gone that one step further and just select the one I will go with, just like I do with character models and backgrounds [design a room once concept] and rotate the orientation till it fits my scene and go from there. Yeah, I am very industrious at being lazy.

You are not alone Ed. At least you got the girls some air! and maybe some kisses? ;)

I would KILL to be that motorcycle right now.

Heh, she does have a cute butt.

I am not clever.

fucking lol at “numbers” on the license plate. Makes me think of My Life With Fel when Kenno Arkkan puts the word “stripes” on tails instead of drawing stripes.

Totally get what you mean by carbs, sugar too. Its that primative brain that keeps craving them even though your logical side already knows about diabetes and such.

If drawing motorbikes is too much of a pest, you could give Nina a Volkswagen Thing (car), instead! :D

It clearly was an innuendo Ed. There have been hundreds during this date (?)

I’m getting a real, 1960s’, Speed Racer feeling, from the second panel.

Carbs ARE evil! However, the monkey part of your brain that screams for them will quiet down if you can hold out for a few weeks, same with sugar. It’s still hard to do, but knowing that there’s a light at the end of the tunnel, so to speak, made it easier for me, hopefully it’ll help you too.

I don’t see it as any more evil than cholesterol. How exactly does one live a carb-free lifestyle anyway?

Probably too late for anyone to notice, but to respond:
They’re not any more evil than cholesterol. They’re not evil at all, really, I was mostly saying that for exaggeration. The problem is a question of quantity – unless you are cooking fresh, balanced meals with raw ingredients on a regular basis (which we should all do, but c’mon, let’s be realistic here) you’re pretty much guaranteed to be eating WAY more carbs than the human body was ever designed to take in at once. Biologically, you’re still basically in the same mode that your hairy hunter-gatherer ancestors were in, and you’re not keyed in to eat loaves of bread or pounds of noodles and potatoes. It’s why carbs (and that delicious subset of carbs, sugars) are a constant craving for most people – they’re cheap energy and your body is still in the “hooray, something sweet, now we won’t starve for a few more days!” gear, which is bad when they’re the most common foodstuff on the planet for an agrarian society. That was the purpose of my comment, if you minimize the carbs in your diet for about a month (and it’s damn near impossible to go carb-free for any length of time, you’re right there, but you can focus on keeping them low), that constant urge starts to go away. It’ll come right back if you go back to old habits, but the noodle demon gets weak and quiet if you ignore him for long enough.

Well, now we know what didn’t happen in the park…

Congrats on getting a credit card. It can be a useful tool, but just like a drill or saw, it can also cause catastrophic damage if used improperly.

So make sure you have your safety goggles when you click that “check out” icon! :)

tHIS REQUIRES AN uPVOTE

the closest “real” motorcycle that occurs to me from seeing her mc is honda’s pacific coast
http://www.picautos.com/images/honda-pc-800-pacific-coast-02.jpg
it can do this:
http://4.bp.blogspot.com/-s09CP_GDTJk/Th3LBz08MKI/AAAAAAAAChw/w0w6D3RBsy8/s1600/Honda_Pacific_Coast_Trunk_Open_smaller.jpg
from the tail:
http://www.2040-motos.com/_content/cars/images/73/69773/002.jpg
this what it would look like when all the fairings are taken off:
http://www.douglasvanbossuyt.com/wp-content/uploads/2013/08/PC800_2.jpg

That is one well-drawn posterior …

It just occurred to me, is that plate an author thing, or is it that Nina’s sense of humour in getting a custom plate?

technically it’s just me not looking up what they should look like. I was also curious about who would notice or care. But it’s not out of character for Nina to do something like this either. I’m not sure if you can have personalized bike plates though.

Minnesota motorcycle vanity plates can have up to 7 spaces. “NUMBERS” would be fine.

Purely in the name of pedantry, I looked that up. Looks like Kansas motorcycle vanity plates are limited to 5 spaces:

But aside from that, who cares, because this is YOUR Kansas.

Mm she’s a vixen for sure.

I thought the bike looked great! But then I realized I was only looking at the seat. ;)