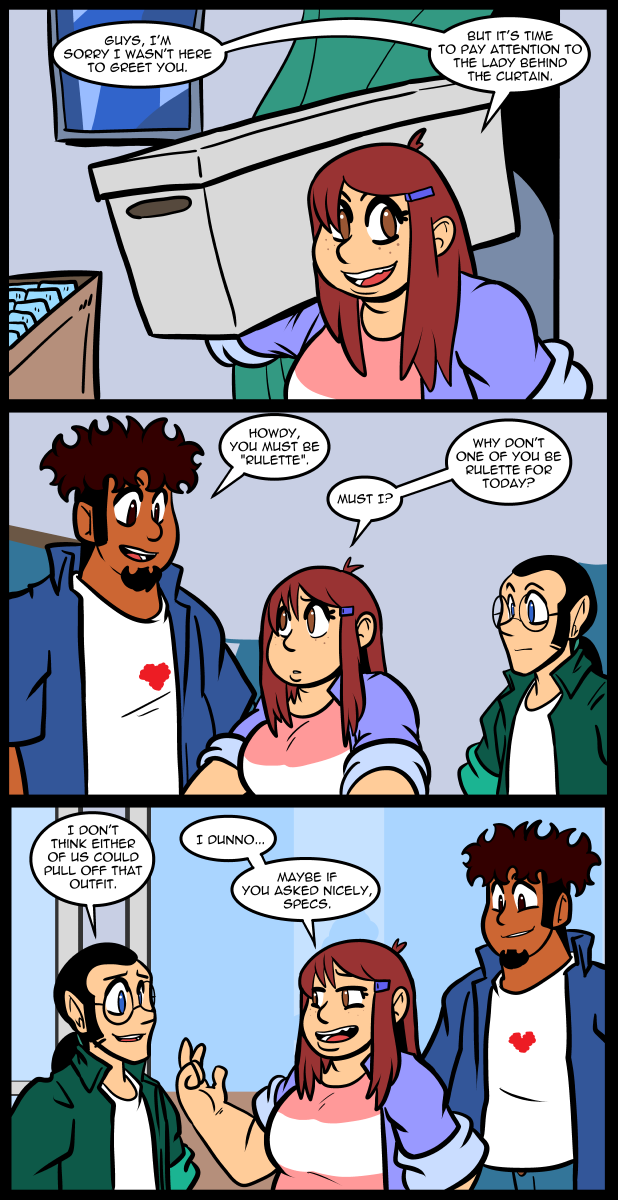 Before drawing this page I’d never really though about what colors to use for Rulette. She existed as one black and white sketch from a decade ago, and a nebulous idea of what the character was supposed to be like. I wish I could say I planned her out in intricate detail, like I did with a lot of the cast, but I didn’t. She’s less of a seat of my pants character than Kayla, but not by much, at least visually. She was also going to be a lot younger originally. Her story was going to be the evolution of a player into a dungeon master, but I finally accepted that I was never going to get to tell that story. Throwing away perfectly good character ideas in favor of what I’m capable of producing seems like such a waste. I’ve got all these ideas with no way to act on them. It’s wildly frustrating. Alex, Rulette, and Reggie are all responses to not being able to tell the stories I want to tell the way I wanted to. Mixing their ideas in with Between Failures has made this story better, but some of the original vision has been sacrificed in every case. Maybe someday I can circle back to Rulette’s backstory.

I have 4 or 5 longboxes of essentially valueless comics. They’re all from that time when everyone thought they were going to get rich selling comics when they were old. Mine are reader copies. They’re bagged and boarded for the most part, but I’ve read nearly all of them, and I got a lot of them second hand. If I had the time I’d like to read some of them again, but it’s such a massive hassle to get out the physical items. I really wish there was a way to turn them into digital copies now. As far as I know not all of the stuff I have is available at all. It feels like I already bought the content and the download shouldn’t be so expensive. I think pricing for a lot of digital content is high. If you aren’t paying for the cost of the physical item what exactly is keeping the cost the same?
That’s part of why I’ve set my patreon thing so low. Keep the prices low so more people can enjoy your content, and more content in general. I’ve thought abut making more tiers, but I just can’t produce special content fast enough anymore. Maybe someday if I ever get to a point where I’m healthy again, but for now I can only provide the comic and a few sketch requests. I guess there’s no point in worrying about it. I’m doing all I can do, and trying to get back to a point where I can produce like I used to. All I can do now is all I can do. It’s not as much as I want to do, but I’m one man. The link to my patreon is Nina on the sidebar if you want in on it.

In case you don’t know, I live in Colorado. Right now there’s a huge wildfire burning out of control in this state. The cloud of smoke has actually gotten as far as the little village near where I live, and you can smell it in the air. Generally speaking, a fire like that causes rain by putting particulate into the atmosphere. As of right now a lot of the state is covered in rolling clouds. So much so that it’s actually significantly cooler out today. There’s a haze all around. I’m not sure if the two things are connected, but after the fire started really getting intense our internet service dropped like a stone. It’s been difficult to get anything online for days now. I had to resort to using my phone as a hotspot just to get Wednesday’s page online. Honestly that’s not that big a thing except I’m basically trapped in the house all the time now. If I don’t have functioning internet I’m stuck in here with the dogs and no real connection to the outside world. Stir crazy is what I believe the feeling is called. When I get this way I start to lose my perspective on things. It eventually turns into this weird sort of non existence where I no longer find joy in anything. Strangely enough, as much as the Teen pesters me I think the agitation helps me keep from getting like that. Kind of like how Holly chose Rimmer to be the companion for Lister in Red Dwarf. Being around someone who annoyed him kept him sane in a way that someone he was in love with wouldn’t.
We’re starting to run out of all the things now. With mom off taking care of grandpa, and the teen with her sort of sister in law, no one has been around to restock. I think I might try to get to town since it’s abnormally cool out. The teen’s shitty car has partially functional AC. I hate to drive the fucking thing, but I could really use some milk and cereal for the coming days. Along with some other stuff. I just don’t trust that car… My truck may not have working AC, but I know it will work. Getting stuck in town would be a huge fucking mess. We just had the car serviced, but when I’ve taking it out to get water it sounds… not good. Admittedly, I’m not super familiar with the car, or the kind of car it is, but it sounds like an old person trying to breathe. It also seems to get very poor mileage. My truck can go a really long way on a singe tank. I’ve only been to the water collection place 3 times and the fuel gauge in the car has gone down by about and eighth, give or take. It seems like a lot… In any event, I’m going to have to do something. If my sister has her kid It’ll be me and dad for… who fucking knows how long. Although I think this might be the one occasion where he might actually take a few days off to see his first grandchild. In that case it’ll just be me… And the dogs. Unless the Teen doesn’t tag along. I don’t know. Everything always happens all the time and I’m stuck here.

The sass on this one.

Yes, padwan, The Sass is strong with this one. And now your lessons begin.

Everyone seems so witty and sassy.

Gosh.
Sometimes, double-meanings are a mystery to me.
Did Rulette just tell a joke to Ed, where she implies: If you ask me nicely, a-guy-in-glasses, I will allow you to pull off my clothes?

I think you nailed it, as it were. Good guess.

I now ship rulette and Mike.

Oh yeah, I totally can see Mike & Rulette! Would that be Milette?

Could be! Or maybe a milieu?

I am 100% sure Mike is instantly smitten, here.

Well there is. But you need a good scanner, patience, and willingness to accept they won’t look as good as they should since sometimes the scanner does weird things

Or you could rely on the “Fair Use” clause of the copyright laws, and download a “personal use copy” from what I call “my TIVO Club”. If you’re lucky enough to be able to find them there. Otherwise, yes: you’re stuck with your own scanner.

Yeah, Jackie sure likes well-upholstered redheads, and I have no problem with that! Rulette has a great personality — I love the way she plays with language. Bet she’s a punster, too. That anime pout-face in panel 2… great stuff.

Once you’re feeling better, Jackie, maybe you could run some of these background stories on Patreon. $X and up viewers only, black and white sketches. Extra value!

“Well-upholstered.” Heh. Totally using that next chance I get.

The saying used to be “Body by Fisher.” Back in the glory days of General Motors. Because the tag line for Fisher Body was “built for comfort.”

That reminds me:
There was / [still is?], a sort of Big and Tall [R] store for women, in Maine. The store is called- “Women of Substance”.
I’ve always liked the name of that store. That’s just my personal taste in things.

I like her. Can we have more pages with her?

That must be what’s messing with our weather here(Oklahoma). Wind blowing, sporadic rain, and it feels like 60 degrees outside. Nice, since it’s been nearly 80 in the middle of the night here.

I don’t know what I expected, but it wasn’t this.

I absolutely love her already~

I didn’t know you lived in Colorado. I was actually planning on moving out there in September/October for school, Denver/Aurora area. Any tips for living out that ways for a backwoods guy from VT?

I have no advice for city living in any state. All I can say is watch your back and good luck.

I get the feeling from her that even though she is obviously short, she could easily pick me up and throw me over her shoulder

And there’s nothing wrong with that.

I just got the bestest and dumbest idea for fanart; Rulette running with Ed over her shoulder from Nina.

No, Rulette takes Nina and Carol throws them over her shoulders and runs from Ed and Thomas

Makes you wonder if she role-plays as a dwarf character.

Hey, I end up visiting Colorado at least two or three times a year. I love the state, but man, the weather and the fires are kind of a giant downer when I’m over there.

(I live in Omaha, Nebraska – an 8 hour drive away from the Rocky Mountains)

Please put this one up on tumblr.

I love this character and am looking forward to the rest of this arc. I hope she is at least as present as Jo’s librarian friend, Alex iirc? But yeah, totally going to try and use that last line. Not sure how, but I’ll find a way, even if it kills me…
Okay, maybe won’t go that far, but still…

Wow. Ed sure is popular with the ladies, isn’t he?

Is that a typo in the last speech bubble or perhaps a “pun” on the comic name?