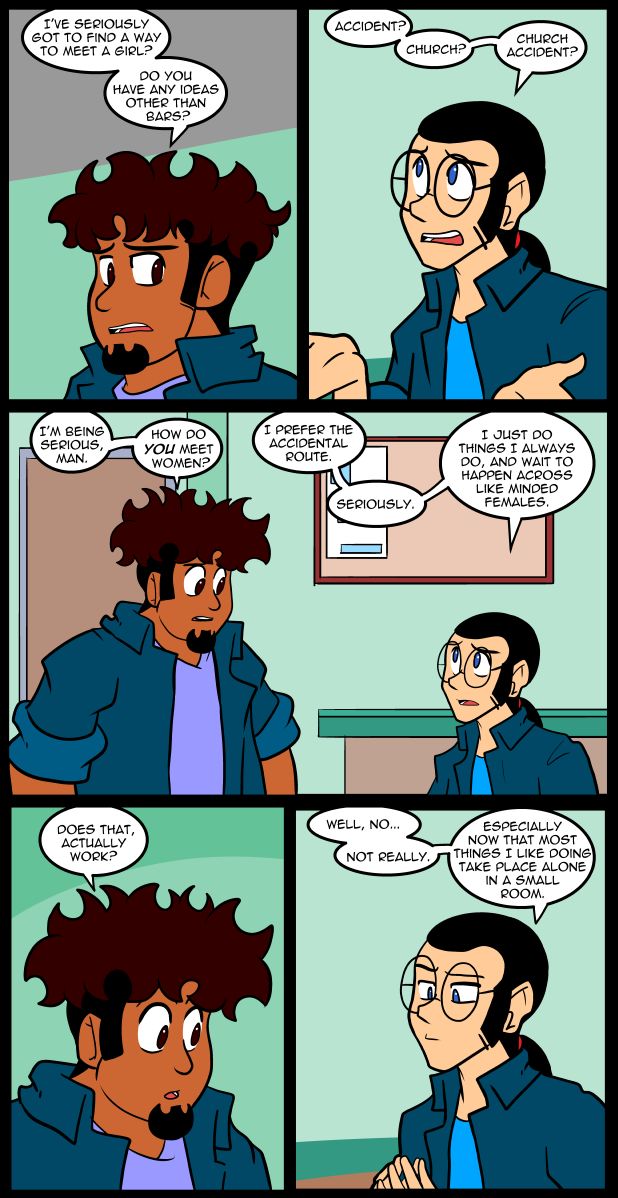 Didn’t have time to write a proper post, but here’s a link I wanted you all to see. A portrait of Brooksie.

Has he forgotten Nina already?

He’s describing exactly how they became a couple.

He wasn’t alone in a small room when it happened, and it only came to be by Jess’s incessant prodding.

Also, something that works once or twice over 21 years isn’t statistically much of a success.

It only has to work once.

I like your comic. It’s been a part of my routine for…I’d like to say over five years? Thanks for all your work, and lovable cast of characters!

I’ve met most of the people in my town.
It’s gotten to the point that I can only seriously date someone if I’m Bi or have a long distance relationship with some of my more intimate friends that I meet at cons.

Neither option is exactly exciting for me.
So it’s the Single life for me!

“Alone in the Dark”, reminds me of how an animated version of, “Sam I Am”, made one part of the book, look like Sam was proposing sex in the dark:

My college friends and I, had a lot of fun with that animation. :D

Not only like-minded females, but ones who don’t think of you as the Labrador they never had. Even “do[ing] the things [you] always do” with others is no guarantee that the universe will steer such a female in your direction. *sigh*

I’m with Ed on this, I just wait for nothing to happen. That way, I’m never disappointed…

Jackie says-
they could have “Moist Max” as an alternative name for “Mad Max”.
Sure: Then the hero could be named…Moist Maxy, and his house could be called- Moist Maxy’s Pa_…uhhhhh, no, no, no. : )

Yeah – that’s about the approach my twenty-something son has taken. He has been out on a date – 7 years ago when he was in high school. Nowadays he’s working on his associates degree on-line (one semester to go), working at his fast-food job (night shift) or sleeping until noon (he gets home from work at 4 AM). All this from a kid who graduated nearly the top of his class from high school and scored really high on his SAT.

I think he’s going to be a bachelor for life.

Don’t despair, I was much the same way. Went on one date in high school, and didn’t have a boyfriend until I was 23. I was too busy with school and work. But I just happened to meet someone accidentally and we’ve been together ever since!

Well, when I was 8, some guy fell asleep at the wheel of his Volkswagen bus and plowed into the front wall of a church in North Windham, Connecticut…

No offense meant to anyone, but was a service going on at the time?
I can just imagine that:

“…and the passage says, Let There be Light!”

Actually, I’m glad you asked — I was a little worried about leaving it at that. It happened at about 2:00 AM (after the bars had closed), so he was the only one injured. VW Buses being what they were in the early ’60s (this occurred in 1965), he was busted up pretty bad, but nothing life-threatening.

And, no, I don’t think he met his lifemate there. There weren’t too many women working on the Ambulance Team (or the State Police) then. That said, FAIK he might have met a nice Nurse in the Hospital…

Did he meet the woman of his life then ? XD

Lovely portrait! I still like how you draw Brooksie best. I like the colors and expressions and line work of how you draw her, her body language and posture. You capture so much in your drawings of her.

Mike likes nerf guns. He could set up a nerf gun tournament in the store, and see what happens.
Or paintball. It’s like nerf, only expensive.

“Most things I like doing take place alone in a small room.”

Now there’s a mental picture I could have done without. B{)}

I met my two most recent ladyfriends at lunch. The current one sat at my table during a busy time in our caf at work — it’s open to the public and really good. The previous one I met at a company picnic — her hospital had a small party and the campground combined them with our group.

I just assumed he was talking about playing video games…

…and girls are almost as expensive as cars. You’re better off if you can get along without them. Not that it’s very bloody likely you can do that.

Don’t waste your money commissioning others to draw your characters. You draw the definitive version. Everything else is merely derivative.

And don’t put down your artistic talents!

You can draw AND you can write!

There are a number of strips out there, “story by X, art by Y” that are nowhere as good as Between Failures.

I’ve had next to zero luck with the fairer sex, and being too incredibly shy with new people, and horribly uncontrollably obnoxious with well-known people… methinks my odds of “finding love” are dwindling. Years and years of near-constant exposure to everyone around me being charming or clever enough to find a significant other and be happy has slowly caused me to become terribly bitter about the concept of love, not that I’ve ever been hopeful in the first place. Horrible self-esteem and a face (not to mention body) that only a mother could love doesn’t help much either. Feels pretty good to just type it out though.

On the bright side, I subscribe to the idea that for each person in the world, there is another who would be that person’s perfect mate.
…. on the other hand, I also believe that mine died in childbirth. >.>

My gf is a shy introvert too.
She can’t talk to new people and has difficulty to even talk to people she knows for some times already.
We met in college and spent two years seeing each other only from time to times after the first year. But she finally became my gf three years later.
I you have friends, try to hang out more often with them. They will make you meet other people even if you don’t talk to them in the beginning.

All my friends are male. All my female “friends” are the partners of the aforementioned male friends. :Y

On the bright side, I subscribe to the idea that for each person in the world, there is another who would be that person’s perfect mate.
…. on the other hand, I also believe that mine died in childbirth. >.>
… or lives in Beijing, or Calcutta, or Ulaanbaatar …

I dunno, for some reason, the concept always seemed to imply that you’d have a chance to meet said person in your lifetime. I don’t suspect I’d ever visit those places.
That said, however, no saying they wouldn’t come to the US. Well, assuming they hadn’t already died during childbirth, or China’s air. |:Y

Ha, man that is gona be the same awkward explanation when I eventually have to answer my kid’s question of how I met his mom.

“Uh…accident. In high school. Actually she had the hots for my friend, he wasn’t interested, and I wanted to make the situation hilariously worse by questioning her about her crush on him, ’cause I’m a dick. Turns out I was more interesting. Hurray!”

I never met a single other person with whom I would have had a relationship (well, possibly, but they were already in relationships, so even if I hadn’t been as well, it wouldn’t have worked). The woman I married was by complete luck, and since then other friends have been like: “So how do you meet women?” and I’m like “DUDE I got lucky! Without that one particular moment in time, I would be in the same situation!” ‘Cause I seriously still have no idea beyond the Accidental Method mentioned in the comic.

Yeah. Like I’ve always been told: determine what kind of woman you want to be with, and become the kind of person she’d want to be with (don’t fake it: when you’re in a real relationship, they’ll have time to find out who you really are; you have to actually change to become that kind of person.) Then just live your life. The woman of your dreams will become attracted to you and then it’s happily ever after.

How I met my wife story. Here we go!

I came early to my first class on the first day of university the first time I tried going to university. I was already 30 by this point. Being in an aviation degree, I knew there would not be many women compared to how many men there were in the program. Even so, I decided to play a game.

I decided I wouldn’t look around the room at all the women who had come in or were coming in, and I would listen for their name first as the roll was being called. After I heard the name, I would determine if I liked the name, then I would look for the person attached to the name.

Then, I hear the last woman’s name, and my ears perk up. (There are only five women in our class. It’s true.) I look around. The name is called again. She’s not here! Well, figures the one name I like isn’t here. I wonder if she dropped the class, or is just late.

At any rate, I just wait for the roll to finish, and the instructor finishes getting paperwork together. Through the window, I get a glimpse of someone coming down the hall, and I get my hopes up. She does come in, and it is the person who belonged to the name I like. There’s a hitch. She’s black! I, being a Texas-raised, red-blooded American am a little surprised by this. Ah well, no biggie. It was a silly game, to begin with.

Later, I decide that I did like her name, so I should come up with some pretense for introducing myself to her. I briefly run into her between classes later, and she is actually cute, so that’s cool. I’ve already determined I’ll never date her because she’s black, so it’s fine if I hang out with her. So, we become good friends, and do pretty much everything together for the next two semesters.

That summer, we were hanging out in her apartment with her roommates. One of them is a Korean international student. She knows me for hanging out with my friend, and starts teasing her about how she and I would make a cute couple. My friend was acting flustered about it, and that caught my attention.

For the next three weeks, I ponder whether or not she would be a good candidate for marriage in spite of being a black woman. At the end of that three weeks, I decide she would be. The next time we were hanging out, I decided to let her know I like her. I made it very clear that I did.

For the next four and a half years, she put me through a lot. (I per her through a lot, too, to be fair.) Finally, we both reach a point where we’re ready to move forward. Within six months, we were married.

We’ve been married for just over a year now, having had our anniversary just a couple of weeks ago.

Mike, there’s always online. Or have you tried that already?

Another place to find women is, of all things, in church. And, in case you are an atheist, there are churches where atheists are welcome as is, where they won’t even try to convert you, such as the Unitarians.