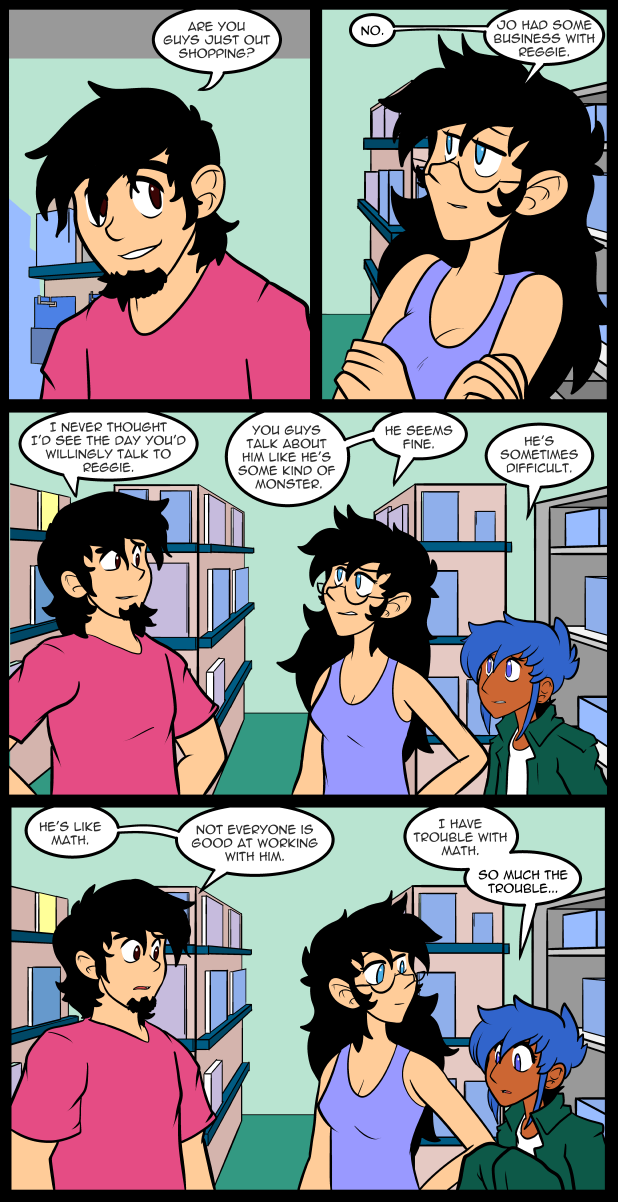 In Jessica’s defense, she hasn’t worked with Reggie for a long time, so she hasn’t built up a memory bank of times Reggie has done annoying things to her. Of course she was a little put off by his gloating, or whatever it was he did concerning her brother, but not enough to pass judgement on him. The fact that she’s drawn to types like him probably had a role in that.

I’m always a little comforted when people like Reggie in spite of his more annoying traits. There is a lot of me in Reggie. If Thomas is the best version of me then Reggie is closer to reality. I’m hidden in all the characters, in one way or another, but it’s a much thinner veil with Thomas and Reggie.

The monitor on my PC broke at some point. I don’t know exactly what happened, it was on a surge guard, but the power is really unpredictable and it flicks the battery backup on and off, over and over, many, many, times a night some times. I think the constant flickering made something burn out in it. The tower is fine, and so is my drawscreen, so I can still use it if I need to. It’s a shame though because it was a nice screen, relatively speaking. I’ve been using my Surface almost exclusively since I went into the hospital, so it hasn’t been an issue or anything. I definetly don’t want the same thing to happen to the PC though. It’s on the actual backup, not the surge guard, so I assume it’s safe. I mean, it’s as safe as it can be without unplugging it when I’m not using it. The important stuff is backed up in 5 hard drives of various ages. Barring an EMP incident things should be safe.

My electronics have been randomly failing since I moved to Colorado. The very first thing that went was a cheat device for my Dreamcast. I had been using it to get through Resident Evil: Code Veronica as quickly as possible, but when the thing got fried it made my save file unusable. Claire is trapped in a safe room with no healing items and almost no health. There’s either no crate, or I don’t have any herbs. As soon as I step out there’s something I can’t get past. Long story short, I never finished the game. Honestly, I doubt that Colorado has anything to do with the failure, it just happened after the move so I associated it with the issue. The problems with the power grid are real though. anything plugged into a wall is in danger, even with a surge guard.

I finally saw the new star wars, in case you don’t follow me on twitter. @betweenfailures The thing about the new one, that isn’t true of the prequels, is that it matches the tone of the original films. The writing feels like Star Wars. Even if the old cast hadn’t been involved it would have felt correct in a way that none of the prequel material does, even the very excellent clone wars cartoons. From the moment it started I was like “Oh, I’m watching an actual Star Wars movie.” which I never realized was something I didn’t do with the prequels. I think the thing that makes Star Wars seem correct is the incompetence of the cast. They succeed in spite of themselves in a lot of instances. That’s my two cents anyway.

Reggie is an OK guy in small doses.

I’m feeling your pain with electronics right now. My computer is in what feels like the final stages of a slow death. It’s very warm to the touch, despite my cleaning out the fans and cooling units. It will freeze up and blue screen for various reasons from graphics card failure to driver failure to just plain don’t wanna work no more. I’ve got everything backed up and am trying to limp it along until I can afford to get a new one. I think the fact that this particular unit is around 10 years old is preventing me from freaking out too much as I think that’s a really good lifespan in this disposable tech age.

You got 10 years out of your compy? Wow, you done good.

Sometimes I wonder why I’m working toward a mathematics major for nothing. Nobody loves math.

We are just jealous. I wish I liked math. But we teach it oddly here. A person is either “good” or “bad” at math. When really, it’s about studying better if the concepts don’t come easily to you.

I hit a plateau with calculus. I never quite got those concepts. Thankfully, I didn’t need them anymore when I left university for a technical school and only worked towards an associate’s. If/When I decide to go for a bachelor’s, I will have to take some extra time to learn the calculus and just push through it.

The only courses I had trouble with when getting my engineering degree was calculus. Care to guess what I have NEVER used since I finished those courses, some 30 years ago?

I can’t do math. That’s why I program computers.

It might be useful in accounting, + banking, + similar jobs.

For most people, algebra is about as far as they will actually need in math, but you would be surprised at how many of the rote formulas that get used in accounting, banking, business, medicine, construction, and even computer programming come from trigonometry, calculus and differential equations. If you can just look up a formula and use it, that’s all you really need, but if you want to understand WHY you use that formula, you might have to get deeper into the math and actually learn some math beyond algebra like trigonometry, calculus, etc. Really, though – most people just need to know how to calculate what they need and don’t care why as long as it works.

I like reggie to an extent, I can see how he became the way he is, but he should recognize his flaws and work to improve them

Good on you for keeping multiple backups. You would not believe how many times I’ve seen someone in a major project saying that they’ve lost work due to a hard drive failure. I personally don’t maintain even a simple RAID 1 configuration, but I don’t really do anything important with my life. Possibly why I’m attracted to Between Failures so.

Did you mean attracted to the Comic Between Failures Itself? Or to the relatebility of the characters in the comic? Jus’ wond’rin

Mathemagics… Is a really old Calculus Professor a Mathuselah? If Mathematics is the Mother of All Sciences, does that make Reggie a Matherf… Oh, it’s too horrible to ponder.

Backups are good. SMART. I’ve had so many things go boom in the past, I’ve acquired bunches of external backup drives. A 500GB lives in my desk for weekly backups of my work desktop and laptop. I used to have a 1TB in my backpack for take-home backups of the same, as well as backups of old computers I don’t even own anymore. The 1TB hit a concrete floor, so I replaced it with a new 2TB. My at-home laptop I’m writing this on has 2 1TB internal drives, so I have a 3TB and a yet-unused 5TB external drive, both Toshibas from Mall*Wart. It also has yet another 2TB portable that holds only backups of my photographs.

It all got to be a bit much, so I built a hy00ge file server that lives in the basement. It has three 6TB drives and a 3TB (my brother’s drive) and it runs off a 240GB SSD. It’s fast and spacious (my Cadillac machine?) and I can remote into it from any machine in the house. It’s kind of weird controlling that behemoth from my little 10″ netbook, but it works better — more reliably — than any machine I’d owned before.

Suspemders-and-a-belt paranoia? Oh, yeah, but the next powerline transient or memory glitch isn’t going to destroy mathoms of data.

Sounds like all you need to do now is build a Faraday Cage around it and you’re all set!

You mean that: Reggie can be a bad, Mather fact-er?

Reggie is good at heart, but he has been 1vs10 for who knows how long. It’s so far in that when he tried being nice people called bullshit. I mean everyone else quips, but they tease each other and attack him. That kind of conditioning is bound to get a reaction.

I’m going to respond to Jackie’s thoughts about the new Star Wars, so without further ado:

I immediately picked up on the new movie “feeling” like the older ones. They definitely caught the same spirit of the old movies, with some minor differences. I don’t think I’ll go into the minors today.

***End of Minor Spoilers, and all spoilers for a moment***

It caused me to think about the differences between the originals and the prequels. Given the nature of the prequels, it had to be somewhat different. I am actually one of those who likes the prequels, even with Jar Jar Binks. To me, he was just the prequel version of C-3P0, so I had already developed a tolerance for characters that annoy me in the Star Wars universe.

The major differences in feel come from the fact that the prequels were set in a time when being an active jedi was not illegal. We actually see Coruscant, which is the major Imperial capital. While we certainly know that Coruscant has its slums, we also get to see the clean parts of the senate building and the well-developed governmental buildings of Naboo.

The prequels are primarily about political intrigue, and aren’t as much of a space opera. One of the highlights of the prequels is seeing Obi Wan operating as an agent of the jedi council to investigate the behind the scenes goings-on of the empire. The prequels do a masterful job of seeing how, through manipulation, Palpatine rises to power as the emperor. He even gets Anakin to turn on his dark side mentor.

This is a recurring theme, having practitioners of the dark side turn on authority figures in their lives. This is part of the reason Darth Vader is able to be redeemed at the end of Return of the Jedi. Luke refuses to submit to the dark side, and refuses to kill his own father. If it weren’t for Vader coming back to the light at this moment, Luke’s choice would have been his death at the hands of the emperor.

So, for The Force Awakens, we’re back to a time when the empire has transformed itself into a dictatorial war machine bent on the eradication of all that is light and the tyrannical control of all known territories worth controlling. This forces our heroes to the rims of society where the empire is not particularly interested in controlling the cesspits of the galaxy. This causes the scenery to shift to backwoods quadrants where poverty, smuggling, and mere survival are the way people get through their days.

The Empire is so disinterested in these areas, they don’t even go to them to salvage the wreck of a star destroyer on Jakku. A team of operatives may have come in and destroyed secret files or technology, but that’s the end of their concern.

Oh, yeah. The Millennium Falcon makes its return. That was well done!

All of this text, and I’m the least of my friends who are fans of Star Wars. Yes. The new movie did strike a chord with me. It is a good one, and I recommend seeing it if you haven’t already.

Looking at John’s Goatee is like looking at clouds.