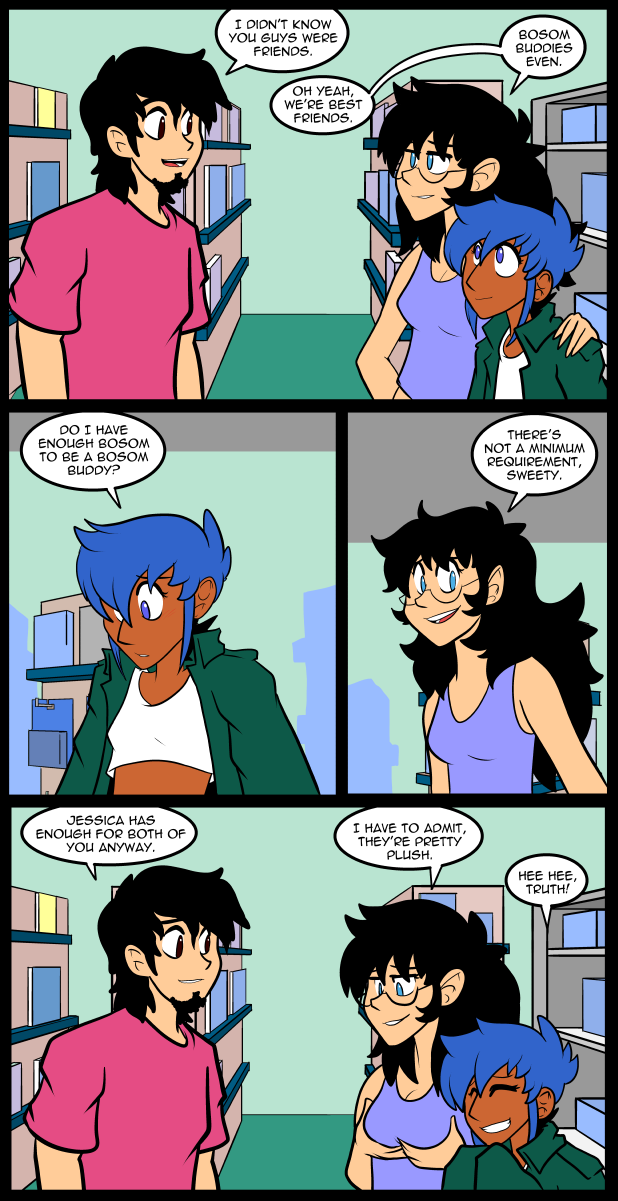 I’m not sure at what point bosom got conflated with breasts, but it was my understanding for many years that bosom was part of everyone’s chest. So, this joke depends on a modern, at least as far as I know, usage of the word. It was also my understanding that you only had one bosom and that a breast wasn’t one bosom and there was no need for the pluralization unless you had two people doing things to their respective bosoms. That’s language for you. It just keeps evolving and there’s really nothing we can do about it. If we traveled far enough into the future, but stayed in the same place on the globe, our language would be much more difficult to understand, probably because nothing will mean anything, while also meaning everything, and the opposite of it.

I have a nuanced understanding of words. Some things I use in ways specific to me, but don’t realize it until I’m well deep in a conversation and realize that the other party is not having the same conversation I am. It can be troublesome. At the same time, my unique use of language makes the writing of the comic a little more special, arguably. Jo, in particular, gets a lot of my odd phrasings, but they bleed in, here and there, all the time.

In an unrelated note, or maybe tangentially related, I told someone I would write an essay about my criteria for determining the value of life, but I’m not going to do that now. I realized that doing so would spoil a big chunk of future pages, so you’ll just have to read the comic, if you’re the person in question. I don’t want to mess up my story for the sake of arguing my personal philosophy. That’s what the comic is for after all. Twitter is a terrible place to try and have any sort of rational conversation. I need to remember that. 140 characters isn’t even close to enough to make a decent point, and having it all cut up over a string of tweets is ridiculous.

It’s the answer to life, the universe, and everything….

Everybody knows that. Now if you could come up with the question, I know some mice who’d pay dearly for it.

Honestly, I feel like bosom should apply to everyone as well. Like that upper, pectoral portion of the chest. Sure, women usually have more there, but men shouldn’t sell themselves short either. I’d also agree with the classification that everyone has one bosom each. Nuance is good. Yes.

The bosom is the space betwixt a person’s clothing and their chest; used for carrying things.
The modern definition of, specifically, a woman’s chest, or, in the case of “bosoms” (a woman’s breast) came about because women’s breasts are within the bosom.

Twitter.. as a medium for expression of rationalised opinion… *chortle*

It can happen. For example, “I like pie, because it’s pie!”

Twitter’s 140-character limit for tweets is rooted in its origin as a text-based service: SMS messages have a 160-character limit, so tweets were limited to 140 characters, leaving 20 for users’ handles.

But it’s been years since most of us used text messages as our primary means of tweeting. Instead, it’s all about desktop or mobile apps. And yet that 140-character limit hangs around, taunting us.

Well, here’s a crafty way to break that limit: Just type out a super-long tweet, take a screenshot of it, and post that screenshot. Boom! You’ve beaten the limit. A caveat: This will eat up more mobile data than a simple text tweet, and it won’t be copy & paste-able.
(credit to http://time.com/3625182/twitter-character-limit/)

Can’t you copy and paste the address of the link? I don’t use Twitter, so I don’t know the limitations of it; I was just thinking that if it’s a photo online you can get the address for it and use it in another post, or download and repost it yourself crediting the last person.

I have a friend who is super at under-140 character messages. She carves gravestones for a living, and frequently helps her clients with their epitaphs. Epitaph, epigram — it’s the same skills…

Jo, Nina, Jess, Carol. Enough for everyone to be happy.

In British English, “bosom” is what you are allowed to call your breasts when you turn 50. At least according to Terry Pratchett (in the book “Thud!”, for those wondering).

Not sure what the American English rules are.

My favorite are the rules to divide syllables. You can separate them:
a) between two vowels
b) between two consonants
c) between a consonant and a vowel

Which means — according to the rules — anywhere you want. I learned this in 3rd grade, which probably colored the rest of my educational experience.

But is Y a consonant or a vowel?

It as a broken letter hanging around only because it has always been there and in odd cases becomes relevant.

Or am I thinking of a chromosome?

It works either way…

But yeah- your heart is physically close to your boobs, and all of that.
I don’t know.
Maybe I just wanted to solve [a good boobs mystery], today. O.o

Former literature major here – I can actually give a little background as to where the term came from. The notion of holding someone to one’s bosom was indicative of a deep (not necessarily or even usually sexual) intimacy between two people, so that the idea was of cherishing the friend or family member, etc, so closely that it would be a joy to fold them to one’s bosom (ie, hug them). Thus, a friend you were close enough to that you would want to embrace them upon seeing them was a bosom friend, and usually was suggestive of a relationship of long standing and deep comradeship.

This was particularly common among men of a like age, often having grown up together or undergone rites of passage together, such as military service, university or other educational training, or even just boyish hijinks such as getting caught poaching or .. well, almost anything. It is the historic language of the educated class, and as such not what you would expect two raff-and-scaff rapscallion types off the street to use to describe their pals.

I can’t tell you for sure when the term became popular, but a quick search tells me that Shakespeare did not use the term in reference to friendship or comrades, which makes me believe that it arose in the post-Elizabethan use of English. It was definitely in common usage by the end of the Georgian era through the Victorian era (ie, pretty much all of the 19th century) and I would not be surprised if it came into use sooner than that.

Fun fact: the term ‘bosom bow’ was used to denote an extremely close female friend of a woman’s, and originated because of the ribbons and bows used to adorn the front of a woman’s gowns. In other words, they were as close as the ribbons worn over their bosoms.

Cool! Thanks for clearing that up. Thanks for both of the notes, actually. : )

I want this comment to be a podcast, because that was quite interesting.

Ha! My voice doesn’t record well, so I’d be super self-conscious about talking on a podcast, but I’m always happy to geek out on any subject I know tolerably well (which are mostly literature, agriculture/ecology, and cooking). But I’m happy people found it interesting, thanks!

I talk too much, and it cut off. The fun fact: the term ‘bosom bow’ was used to indicate an extremely close female friend of a woman’s, and the term originated because of the lace or ribbon bow worn on the front of a gown. In other words, the friendship was such that they were as close to one’s bosom as such a bow.

Thought it was more of an action for people who would run into each other as a form of greeting, like a brofist, but more chested.

tHAT’S THE COOL THING ABOUT BOSOM BUDDIES, BOSOMS ARE AN OPTIONAL EXTRA.

Isn’t there a traditional reference to “the bosom of Abraham” meaning to be within his favour and protection?

“The Bosom of Abraham” was what the ancient Jews called Paradise (cf. Luke 16:22ff.) I guess because he was the first one to go there?

And there’s a popular song of a previous century that mentions “…a glory in his bosom that transfigures you and me.” Make of it what you will.

Language is weird because people are weird.

language is definitely odd sometimes – especially teaching English in Japan, I keep discovering odd rules or instances when I’m speaking or trying to teach, desperately trying to figure out why I speak that way

Good luck with that. The “rules” of English often have more exceptions than standard uses. Nothing makes this quite as clear as trying to teach English in Japan. That’s when you discover that you’re a native speaker of one of the 5 hardest languages on the planet to learn.