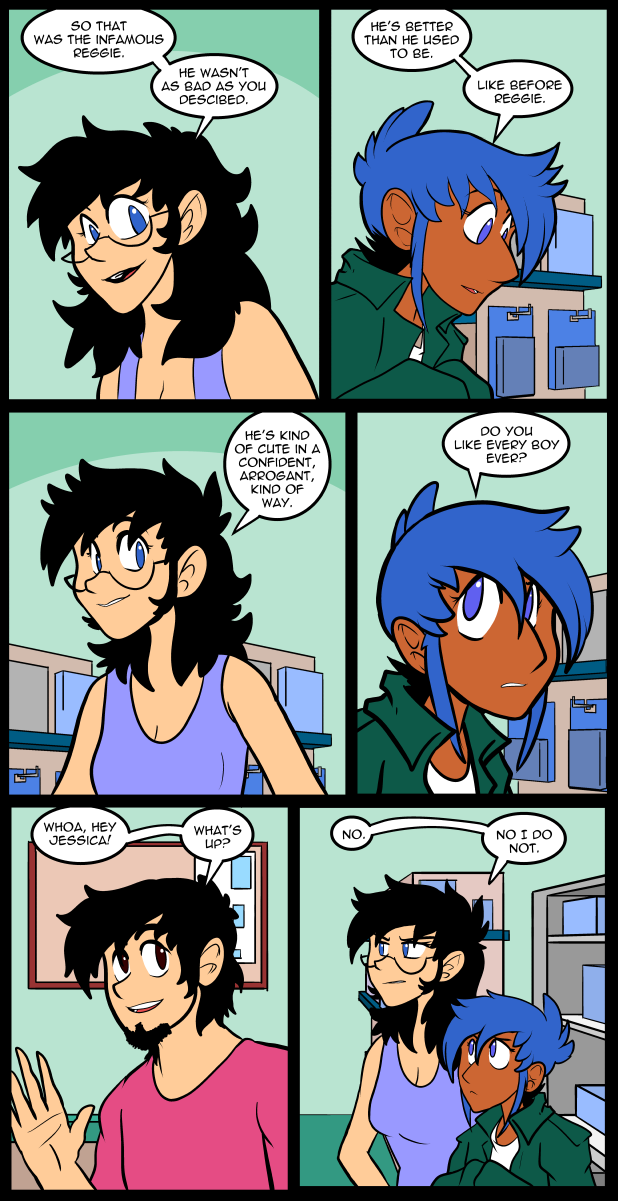 From their first meeting Jessica has been cool on John, but there’s never really been an obvious reason other than she seemed to really want Thomas. Little Jo seems to be just a tiny bit annoyed with Jess’s perpetual randiness.

I went to the store today, after a week or so of being fine, and suddenly came over faint again. I had to lay down for a bit after, but it didn’t take nearly as long as usual. So, progress, I guess.

I went to the store for some storage boxes to sort Lego pieces into. Among other things. The after xmas clearance on Lego is middling, but there were some creator sets cut way down, so I have a couple of extra car bits. I’m keeping an eye on some other ones because our Walmart never has its clearance properly marked. If you have a phoine app you can check though. Which is how I found the stack of car ones who were marked way lower than the stickers.

So David Bowie, huh? When I was little I had a shirt with his name on, and I clearly remember my mother telling me who he was and why I liked him. Labyrinth is what I best remember him for. I’ve never been a big music guy, but I have that soundtrack burned into my mind. Honestly I should probably listen to his music now, because I’d probably like it.

Does she know him from a much earlier time?

Modern Love is my favorite.

Go listen to Changes, then The Rise and Fall of Ziggy Stardust and the Spiders From Mars.

Actually, you might want to pass on Ziggy, now that I think about it.

It’s a real trip and all, but after remembering your thoughts on Nightmare Before Christmas and the like, you might find it as more just… out there. Tough call I guess. Just stay away from 80’s Bowie. If you don’t, then don’t say I didn’t warn you.

Black Star is out, rather interesting. I heard a few tracks from it on the radio today.

I heard a few track on CBC radio one on their new music release show. Then this week I got to hear the news and a lot of commentary. They think that in Black Star he was getting ready to die. Listen to it in that context and see what it says to you.

So she is picky

I suppose that walking around, looking like Shaggy’s black-haired brother, does come with a few disadvantages. ; )

huh. I figured she’d still be irked over the fact she was used as a betting trophy that no one actually wanted to claim

Time invested listening to Bowie is time well-spent. I’ve been doing it for over 30 years. You probably already know Space Oddity, but here’s a weird early video for a slightly different version): https://www.youtube.com/watch?v=D67kmFzSh_o (Astronaut Chris Hadfield’s version is also well cool.)
Other songs that will get you into Bowie (in almost chronological order): Life On Mars? (yeah, with the question mark), Rock and Roll Suicide, The Man Who Sold The World, Panic In Detroit, Golden Years, the entire Young Americans album, Sound and Vision, Heroes, DJ, Fashion, God Only Knows (yeah, the Beach Boys song), Loving The Alien, Absolute Beginners, Time Will Crawl, Black Tie White Noise, Strangers When We Meet, Dead Man Walking, I Took a Trip on a Gemini Spaceship, New Killer Star, Valentines Day, and the entire Blackstar album.

It’s funny because I always thought of Jess as being a female version of John.

The story you’re about to hear is true, in every detail. It is a furry story

So, I’m just about to start up my second semester at school here in San Antonio to get my A&P license. I had to write some papers to apply for a scholarship that I won in the first semester. Writing these stories reminded me of a friend of mine from high school and his father. I have fallen out of contact with them, but decided to call my friend’s dad. (I don’t have my friend’s contact information.)

A&P license stands for Airframe and Powerplant license. It’s a license one gets to be eligible to be a mechanic for airplanes. My friend and his dad are both pilots. Dad is also an A&P mechanic. They are pretty much the reason I’m pursuing a career in aviation, and the reason I haven’t given up after so many years.

I digress again. I call my friend’s dad, and talk with him for about 40 minutes to an hour. I thank him for the way he has sown into my life and inspired me in all ways aviation. He expresses appreciation, and tells me how he’s been for awhile. We start talking about my friend, and what he’s been up to.

Friend’s dad tells me that my friend sews fursuits in his spare time for fun and profit. Mixed feelings wash over me in a torrent. He’s apparently quite good at it because he’s apparently sold at least one fursuit for about about $4,000.

These feelings are not helping me, since my wife and I just finished receiving some introductory lessons in sewing from a lifelong seamstress. In case you’re wondering, this seamstress has done work for Oprah, among others.

So, yeah. Paradigm shifted. Good job, world. You got me there!

I don’t understand. You are considering making fursuits for spare cash? what’s wrong with that?

You should at least make me a hat with some cat ears on. Siamese if you please!