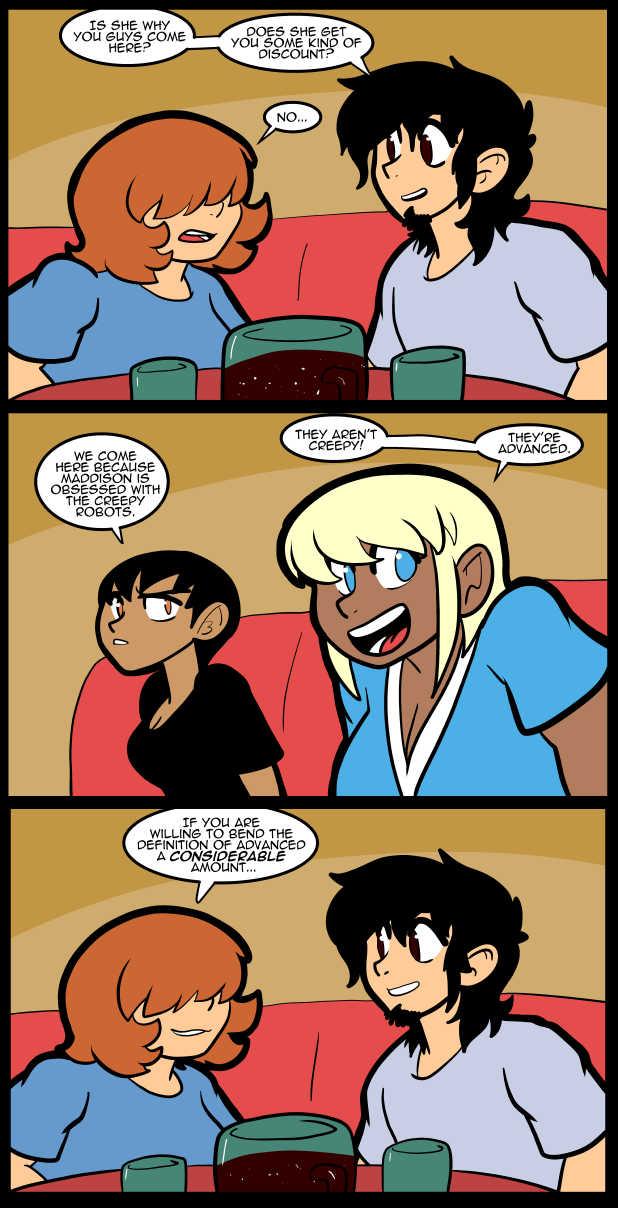 Maddison is not shamed about what she enjoys… not even slightly creepy robots in a kid’s restaurant. Evrina not so much.

I don’t find animatronics creepy unless I look at them for a long time, or the lighting is really low. Its weird how context like that can change your emotional response.

I had this weird dream about traveling in a really small, one person, car type thing. It was basically a scaled down car that worked exactly like a regular one. I went to a restaurant but when I was in the bathroom a family took my table. I had decided I didn’t want to eat there, so I just took my stuff and got in my little car, but then some guy recognized me. He started telling people about me, but not about the comic. It was other stuff I’ve done, but I couldn’t see why he would care and he was a little off putting. All I could think to do was drive my tiny car away after telling everyone to visit the website if they wanted to see what I was doing now. Then I went to McDonald’s which was the high point and end of the dream.

I really want that tiny car though. It was small enough to drive indoors if you had a decent sized room. I drove it inside the restaurant as I left it… So fun.

amount is spelled wrong (just tryin to be helpful Jackie) :)

I’m going to disagree with you there. They are VERY creepy. Then again, props to Maddison if she’s not creeped out by them.

¡¿ is Maddison going to drag Reggie here for their next “date” ?!

There is a slight possibility.

For small cars- I like the American Bantam [R] cars.
They started making ABs in 1929.
The American Bantams were probably not much bigger than a 1970s, VW Bug, and they have cool looking, round fenders. The ABs look a lot like the cars in gangster films.

Here’s a link to see them: https://en.wikipedia.org/wiki/American_Austin_Car_Company

It appears Bennie from Who Framed Roger Rabbit had some inspiration for his design.

That was a roundabout Invader Zim reference, right?

THIS HAS NOTHING TO DO WITH JELLY!

I thought that, too!

If you stare at an animatronic very close for a long time, it just “might” bite you.

What, no Five Nights at Freddies references yet? Sheesh. Creepy anamatronics… seems like a natural. Too easy, perhaps?

someone else already mentioned it, so I don’t have to comment and say that Amount is only one M.

So, basically, what you’re saying is that you had a dream about the Peel P50?

That’s actually pretty close, but mine was 4 wheeled with a convertible top and two headlights.

Hopefully I won’t rub anyone wrong with this …but this kind of thing really cranks my shaft, i.e. I’m about to blow my head gasket …

My sister is a car mechanic. She knows a lot of fun things- that you can do with a rear end!

Interesting, does any of that involve tailgate parties?

Wow! I wish [ I ] was invited to THAT kind of tailgating parties! :D

She can really wear out your chassis, if you ask her nicely.

… and on a completely unrelated note, I’ve just realized for the first time that “junk in the trunk” can be interpreted at least three ways … but I ain’t gonna talk about your sister like that …

Is it me, or is it also quite large? It’s so large I couldn’t figure out what Victoria had in her hand a few frames back.

Maybe it’s part of a drinking game, with root beer?
When you lose, [ you have to drink all of the giant mug ], or something.

Maybe it’s a glass that is really close to the POV?

I dunno, people patent a lot of stuff, and some of it works and some doesn’t, I think Mercedes had a three wheel car that sat one person back in the thirties or forties, but I can’t find the Ref. for it now. I saw one in Munich, Germany, in a museum.
Jackie, I think your dreams sound like a lot of fun! Yeah, there was some drama, but no blood! I like that in a dream.

… they just put Trump into the Hall of Presidents at Disney…

If he visited Disneyland, could we pick him out, from the disney robots?

And what’s wrong with that? Disney’s just sticking to their usual routine, you can’t just expect them to give that up simply because you don’t like the current President.

It’s not about his politics.. that has to be an Extra Creepy Robot.

I gotta hand it to ya Jackie, I may disagree with you politically, but goddamnit if I didn’t say that Maddy is the sweetest little thing to grace my time reading this whole webcomic.

I was going to make a joke about this by going all caps lock crank … but then I wasn’t sure how many people would think I was serious … :-(

Do enlighten me on what you believe then, I promise to be respectful.

I don’t have time, but feel free to come argue with all the kids in the polidicks channel. I’m bound to show up eventually. https://discord.gg/aUAtvVg

Loved Evrina in panel 2, that’s a new expression I think. Even if she’s disgusted quite often.