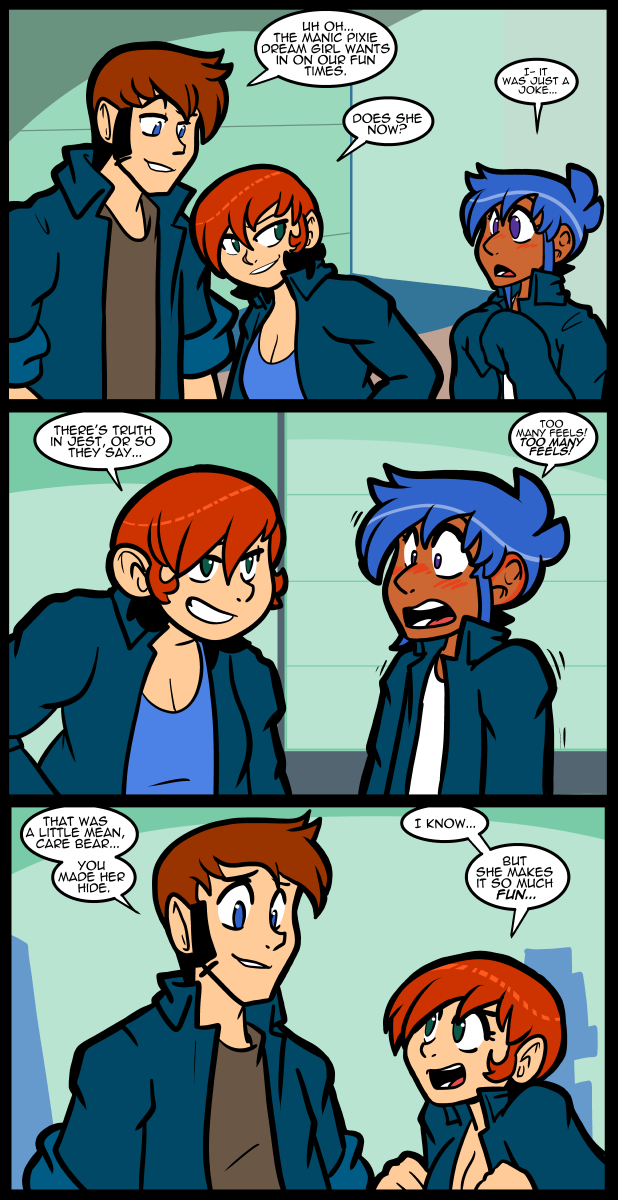 Technically Brooksie isn’t a manic Pixie dreamgirl because she’s not the idealized tomboy that is showing the main character how to love life. She’s pixe dreamgirl adjacent. Unfortunately since people hate not being able to reduce everything down to simple terms she gets labeled that way pretty much by everyone. That said, she actually is a MPD in her own story for all intents and purposes. Jess is just the average man in this case. Except she’s also a really hot girl, and doesn’t need to be shown how to have fun. She’s a MPD in her own right arguably. Basically combined together they are like cocaine mixed with speed. (I actually had to look up drugs to find out if that metaphor worked… Or is it a simile?) In addition to that Jo is only an MPD around people she feels safe with. In other circumstances she’s the shy girl. Shrinking violet I think is the trope name. Since people aren’t ever just one thing she can be both. I’m very confident around people I know, but in unfamiliar situations I’m basically only ever a stray thought from a full on panic attack. Of course since I’m a fat dude I’m not ever gonna be mistaken for a MPD. I don’t know what the male equivalent is. Or the shy girl one.

I actually wrote the first version of these two pages with Carol referencing Bechdel, but then I realized she probably wouldn’t give two fucks about that dumb nerd shit. So Jo would need to say it because she would. Also Thomas would know that Jo would know what he’s saying by calling her a pixie dream girl and that Carol would pick it up from context clues. It’s possible that Carol has heard the phrase in passing though it’s a lot more common than Bechdel among regular people and Carol skews more towards regular.

Anyway, I got distracted by stuff so I guess this is done. I think a lot about my dumb comic I make.

Just wanna say that the girls’ expressions on these last two pages have been spot-on fantastic! You are a master of the sly look and the overloading Jo. Many Kudos!

I think a lot about this comic too. Its well written, and the art is nice. It’s also nice to see a little tropanese thrown around, makes me feel at home.
Keep doin’ what you do, Jackie. Its glorious.

Yeah, I was just thinking about how you drew Carol, in frames one and two, OMG, the facial is just Fine, but the cant of the shoulders just says the whole, “I’m gonna, getcha” so beautifully, I saw the frame and knew the gist of what she was going to say before I read it.
Now that she’s said it, I’m not sure what to think? I’m glad Thomas dodged Righteous, and didn’t doge Pervy on that. Thomas is a Righteous Dude! If my life gets a do over, I want to be a Thomas. I promise.

The humility is adorable, Crave, but your comic is NOT dumb.

And that’s all I have to say about that.

Tsk Carol. Spore, you may be fun gal, but that was rotten …

poor Jo, i hope she can recover from all those feels

??
A dance/party for deities?
Inquiring minds are bouncing off the walls with eagerness to know ;-)

He had an accident, and only has one left?

If we’re discussing Jehovah, I would have thought it grew back … otherwise why would be have the old and new Testisments?

They’re all ways bouncing to left and to the right.

I wonder what Carol would have done if Joe had stood up to her and was like “Yes. And I’d like to bring my Camera too. Also my girlfriend. The Camera is not my girlfriend.”

My guess: Carol doubles down and says, “Sure give her a call, but the camera isn’t necessary – everything that happens in my bedroom goes out live on my youtube channel.”

It’s a simile, which is a subtype of metaphor. Basically, if a metaphor is expressed using the word “like,” it’s a simile. :)

I believe the male equivalent is the Ducky, from Pretty in Pink

I’d love to see Jo join in with Thomas and Carol! It’d be epic, in my opinion. But of course, given Jo’s character, i think it’d be a more casual, “friends with benefits” type thing, than the serious relationship Thomas and Carol have going on.

I’m thinking it’d be sort of a “friends with benefits” situation, except that Thomas and Carol are cool with Jo and Jess both being in on it? like, two separate couples romantically, but an awkward tangle sexually?

The speedball of threesomes.