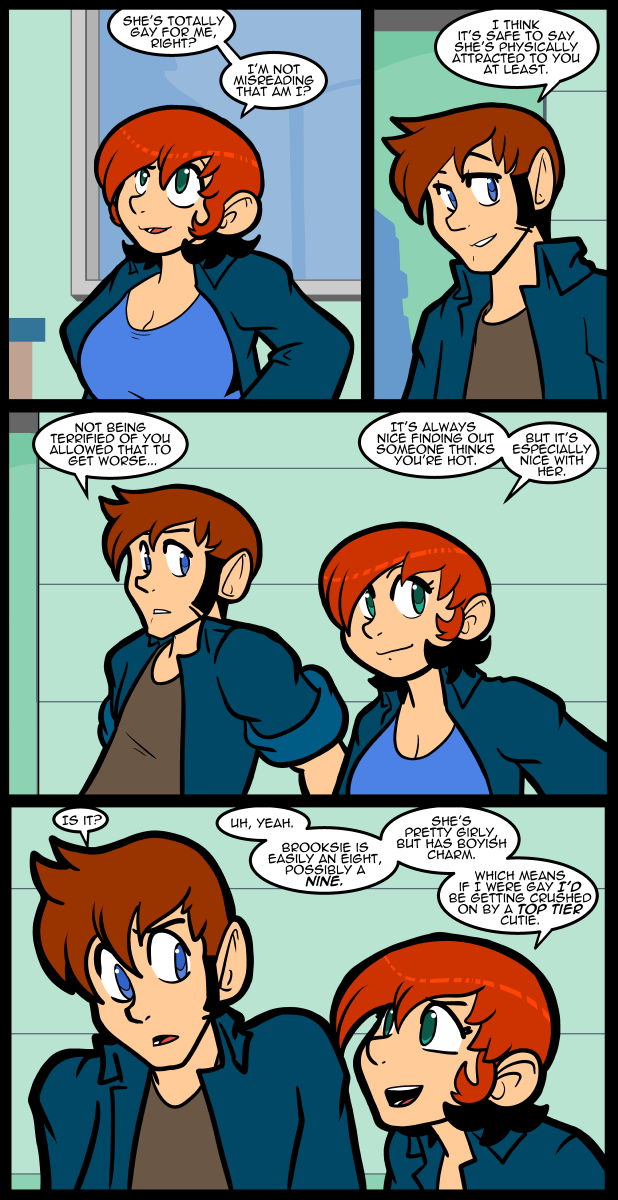 Carol is not picking up on Thomas’s subtle warnings. He’s going to have to get a little less subtle about this…

I haven’t talked about the Teen for a while for a number of reasons, and I don’t really feel like listing them. I will, however, say that she has a decent job, that she works hard at, and has passed her driver’s test. She’s doing okay. Now that she is essentially independent I have managed to claw myself a little bit out of the hole I’ve been in for… years I guess? I’m plagued by sense of general unease about virtually every aspect of my life, but at least she’s figuring her shit out.

It’s been a while since I’ve given the link out for the comic’s Discord server. This will the said link. It’s fairly active, with a cast of friendly regulars, but new blood is always good. Don’t be afraid to wander in and say something at random. Someone will be along at some point to respond. Alternately you can just start talking and people will generally adapt to whatever is going on at any given time. Also everyone is generally polite, even in the political channel, so be warned that this is expected of you.

Unlike many webcomic discords I created this myself and wander in from time to time, follow rules only when it pleases me so to do, in spite of making many of them myself, and generally act like the pile of human garbage I am at my slimy, horrible, core.

Discord is a lot easier for communication than, say, Nintendo’s sad new method, so maybe we can play Splatoon 2 sometime and use the voice chat to scream at Japanese middle schooners who have mastered the game in ways we can never reasonably hope so to do.

And this is why her ears turn red every time she gets within fifty feet of Carol.

Yes your tweet about Dr. Doom having a movie is dead on. The thing about Victor von doom is how many ways he can come at u. Magic, tech, he’s no hulk but he can go toe to toe vs the thing, and lastly he has a whole damn country to throw at u. Talk about viristile villians

Doom is also insane in a fun way. He once put Spider-Man on a timer and spent the whole day timing him while Spidey struggled to do what he told him to do.

He’s also teamed up with Dr strange, got turned into a statue by thanos, and even channeled spider Man’s comic power. Good Lord marvel has had a feild day with this guy. This sound by no means ever stop

It’s not a schooner, it’s a sailboat!

I have to agree. Lol

Fucking Japanese kids, I swear to god. They piss me off so god damned bad. I can’t handle it…

Possibly, but I read it more as his being protective of Brooksie’s feelings, which Carol seems to be treating very lightly as something to be played with…which could lead to some misunderstandings and hurt emotions if it isn’t handled carefully.

One does not exclude the other.But yes,Carol is,either way, risking her relationship with Jo.

Well Jo is a palette-swap human version of a gardevoir after all.

These type of number systems are useless to me, I’d call everybody a 5 or 6, only the most disgusting pieces of shit (on the inside and the outside) a 4 and only the most outstandingly beautiful and naturally likable people a 7.
I like to stay in the middle (multiple choice tests are hell for me too).

I always call everything a seven when asked to numerically rank things.