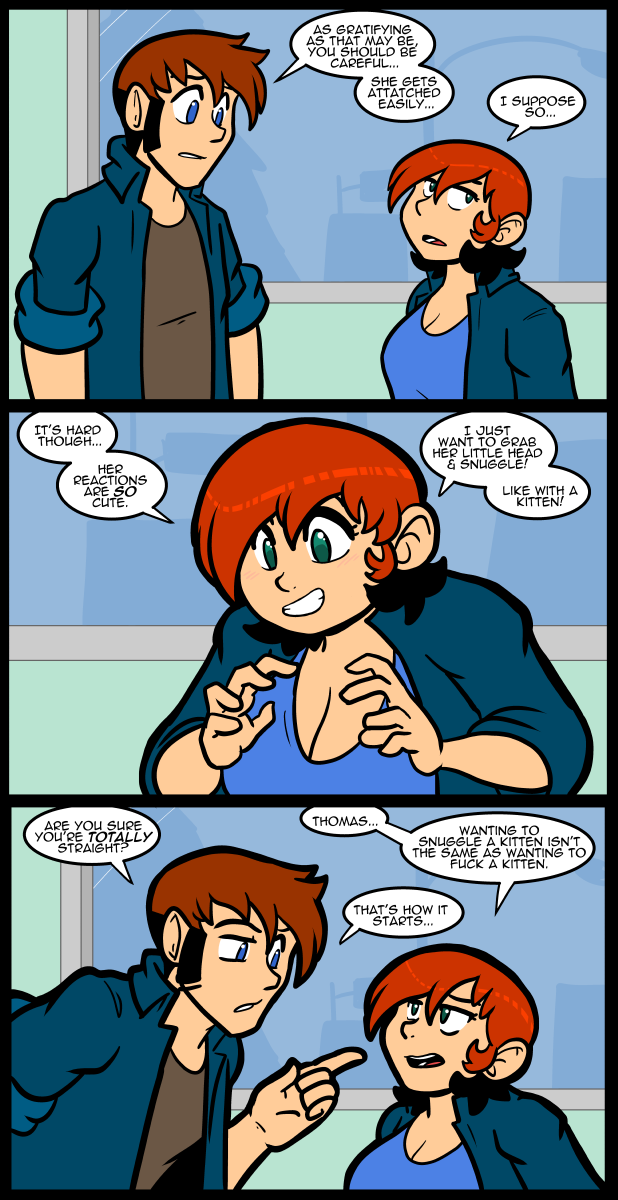 Tiny bottles of things seem to have the same effect on women as Jo does. The magic of reduced scale is very powerful. It seems to be coded into humans. Maybe to keep us from tossing our young into the river when they get annoying. It must be a good tactic in concert with other things because there are a lot of humans and most of them get raised by their parents. In any event I’m pretty sure Jo would accept any snuggles Carol offered. On some level I also expect Thomas is jealous of that.

The Teen was lamenting her lack of money causing her to be unable to visit her dog at the house, so I bought her some gas. even though that’s probably irresponsible of me in some way. Then I ended up talking about star wars with her BF for at least an hour while she enjoyed her dog. Maybe not the best use of my time, but there we are.

Hey, talking Star Wars for an hour is [i]never[/i] a waste of time.

wasn’t there a discussion on here before about where everyone sits on the Kinsey Scale for the BF cast?

That’s how catgirl fetishes are formed.

I don’t want to know how you know that.

Why not? I think it would be purrfectly fine to hair meowre.

Come on PM, I’Manxious for details!

I think that’s furries get started

You’ve gato be kitten me.

Is that how Gotham got CatWoman? I always wondered.

“otherwise humans wouldn’t put up with the shit babies do.”
or the shit they make, for that matter :-)

That type of talk leads to bad felines, all around.

Yes, that scene would likely to be a catastrophe …

Hee hee hee! :)
You bet!
I dunno about cat puns. When I talk to most people about cat jokes, mouser not able to think of any.

Doesn’t seem to be slowing you down :-) At this rate we’ll qualify as hissssterical hepcats …

talking about these animals feels kind of cathartic, doesn’t it? :D

On an unrelated note, all I had to do was scroll up, and I would have spelled it right.

I’m disappointed in myself.

If you enjoyed it, it ain’t waste of time, it’s relaxation time. And if your morale is as low as it looks like in a lot of your comments (not as much recently, which is promising), you need it.

I liked Jarjar and the sequels were awesome. Shut up.

Ah, I see you’re a man of culture as well.

Yesterday, on twitter, Jackie said that he liked our [comments on BF]! Thanks, Jackie! :D

It starts with a little kiss, like this! Doo doo doo doo, da doo doo

If the teen can drive and is desperate enough, there’s plenty of companies who need truck drivers. Whether it’s a delivery truck or over the road.
Mars and Pepsico are 2 places to try.

That’s exactly why babies are cute, so we don’t just toss them in the river and say, “well that thing is useless.”

I remember the first time I opened up a laptop in the 90s. I couldn’t believe how small all the components were!!! Then I was weirded out by my own reaction. ^.^;

I found your blog web site on yahoo and analyze simply http://google915er_221.com a few of your early contents. Continue to maintain the very good run . I simply additional up your RSS feed to us RSS Bar News Reader. Searching for forward to reading incredibly from you later!