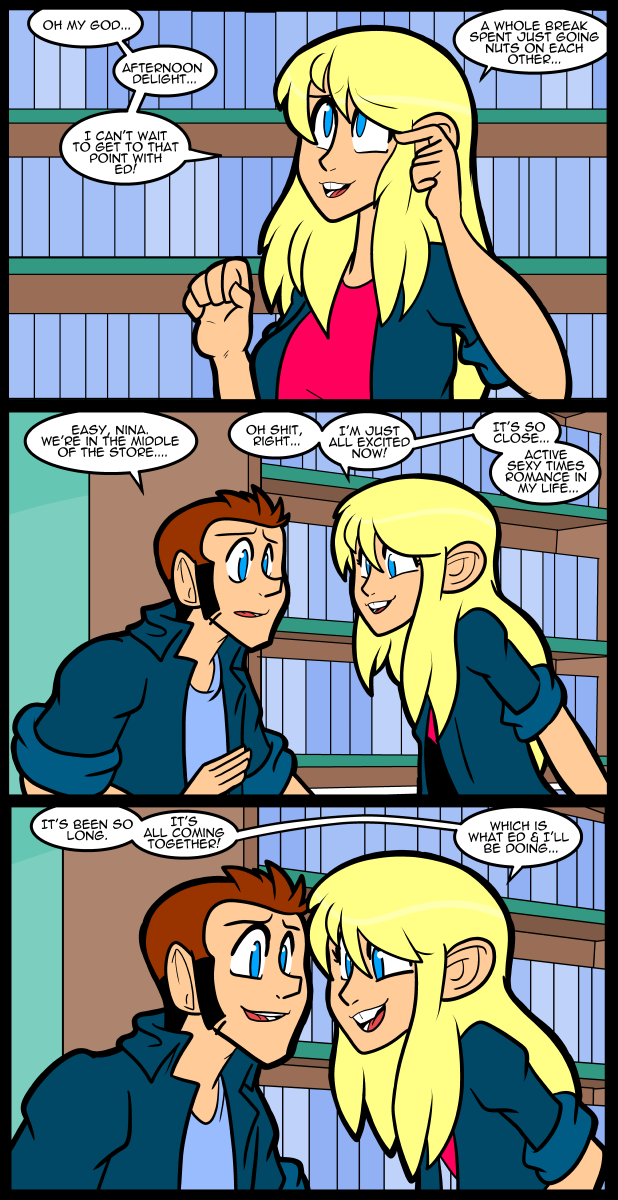 Nina is forward thinking when it comes to her love life.

The other day I played the original Legend Of Zelda on Nintendo’s Switch online thing. It’s one of the few games I have much interest in playing for more than a few moments since it has a save and some rpg like progression. One of the things I like best about replaying LOZ is that you can upgrade yourself to the second sword and armor without ever setting foot in the first dungeon. It feels like cheating, which I enjoy. If you know where to look you can even get all the money you need without having to grind for it all. Eventually you get to a point where your power scales back to where it “should” be, but it makes the early dungeons much easier and the dangerous parts of the overworld much less so.

Nintendo has sold me LOZ, in essentially the exact same form, at least 4 times. Well, my mother bought me the original when I was little, so I guess subtract one. I got the GBA release that came at the end of that system’s life cycle. I got it again when they added it to the download shop for my 3DS, & now I have it on the Switch. (as long as I maintain a subscription at least…) It’s great to be able to repackage your work so it keeps being a source of income, but I would really like it if Nintendo made a special updated version. They didn’t do it for any of the anniversaries so far, but have released updates of several Mario games. I don’t know why Zelda gets no love on that front. (For the record, the GBA version of Super Mario Bros 2 is the best version, but you can’t get IT on the download shop, only the original version, which really sucks.)

Zelda has a weird history on the NES whereas Mario kept to its formula a lot more closely, maybe that has something to do with it…

I think that is more if you make a quality product people will always come back.

I worry about Nina’s excitability I think it foreshadows that she might be the one to bring attention.

Well, after a certain point, I’m sure that the only people who won’t be screwing someone in that store would be Michael and Wesley. The latter because he’s a skeezy, spineless punk. The former I couldn’t speak for, but I’m sure the only hope he has for steamy action is with Rulette.

Big fat difference between banging a co-worker and banging a subordinate.

And I bet Wes can get all the (low-quality) tail he wants with his faux-hipster routine.

Jackie, if you ignore everything else, please let nothing bad come of this foreshadowing!

To even get the second sword in Legend of Zelda, you need at least six hearts. You would need to keep a good distance from enemies to accomplish that and know where the secret areas are that have the heart containers.

“IT’S A SECRET TO EVERYBODY”

All you need is a candle, bombs, & your memory. Killing overworld enemies isn’t that hard.

An extremely rare “pro”-tip, in 3 steps (“rare” =”I actually figured-this-out all by myself!”):
1)_Careful inspection will show you the “seams” between the graphical tiles of each screen-image. For “non-dungeon” screens, I seem to recall each screen as being 16 tiles wide & 10 tiles tall.

2)_When placing a bomb against a rock (to reveal hidden doors), NEVER place it on a SINGLE tile — place it squarely BETWEEN 2 tiles. This will allow 1 bomb to “test” both rock-positions (Left-&-Right), saving you LOTS of bombs! This trick can even be done while using the Raft, to reach across a river, & bomb a rock-wall.

3)_This selective bomb-placement is much easier to do if you 1st “cull” the monsters down to just 1, so that the full set of enemies won’t re-spawn on your next visit. Now, if only this “culling”-trick could also work on the screens that contain “Falling Rocks” … (sigh).

I seriously doubt that I’m the only one to think of this, but I’m still a tad proud to have come up with this without any outside help.

Re_”Zelda has a weird history on the NES…”:

Just a reminder. The original NES is 8 bits.

Sorry about that — I should’ve said 16-color, as opposed to the 256 colors of the SNES.

Killing overworld enemies isn’t hard but it’s VERY easy to get complacent to the point of getting hit when you least expect it.

Very true, but dodging multiple enemies is more annoying than dodging just 1 (to me, at-least), & “culling” makes it easier for me to speed thru a screen to my destination elsewhere.
I occasionally *HAVE* been known to kill them all, exit the screen, then return right away, to kill them all again, but I feel that it’s a very inefficient way to “grind” for more loot.
Most of my worst troubles have been from trying to deal with the “Falling_Rocks”, the “Flying_Helicopters”, & the “Sand_Burrowers”. My gaming combat-instincts are rated as being somewhere between “vestigial” & “non-existent”, even at the best of times.

They weren’t called that in the original game.

going “nuts” at each other, hehehehe

With that kind of thinking, I feel as though her and Ed just aren’t meant to be. O.O

It ruins my ship though, Reggie and Nina.

You guys are being pretentious. I do think Ed and Nina will have good chemistry with each other. They play off each other wonderfully.

It’s probably because no one can agree on what would make those games better, Mario games are easy, add more levels, bring back powerups from other Mario games, and some Mario adjacent ones, done. Unfortunately, Zelda games are all, or mostly all, standalone. Every Zelda game has a different set of Link and Zelda, they all take place in a different world, and time. So it wouldn’t make sense to bring back any of the items from other games, with few exceptions.

In the opposite direction, i don’t know why the term “afternoon delight” puts me out so much. You’d think any reference to spontaneous mid day fun times would be most agreeable, but that one is sour milk to me.

Maybe it has something to do with skyrockets in flight always ending in an explosion of some sort.

I tried a few Nina like sayings and landed on the song title because it sounded the most natural in the scene. She tends to speak euphemistically so it suits her idiom. Midday nookie sounded out of place.

not as out of place as “naptime nookie”

I found old games like the Legend of Zelda (and 2nd sequel Link to the Past) or Super Metroid aged surprisingly well and are still fun to take for a spin from time to time. Especially with the advent of randomizers that shuffle items or even dungeons around.

They’re worth checking out, I know they breathed a new life into these games for me. https://sites.google.com/site/zeldarandomizer/
https://alttpr.com/en