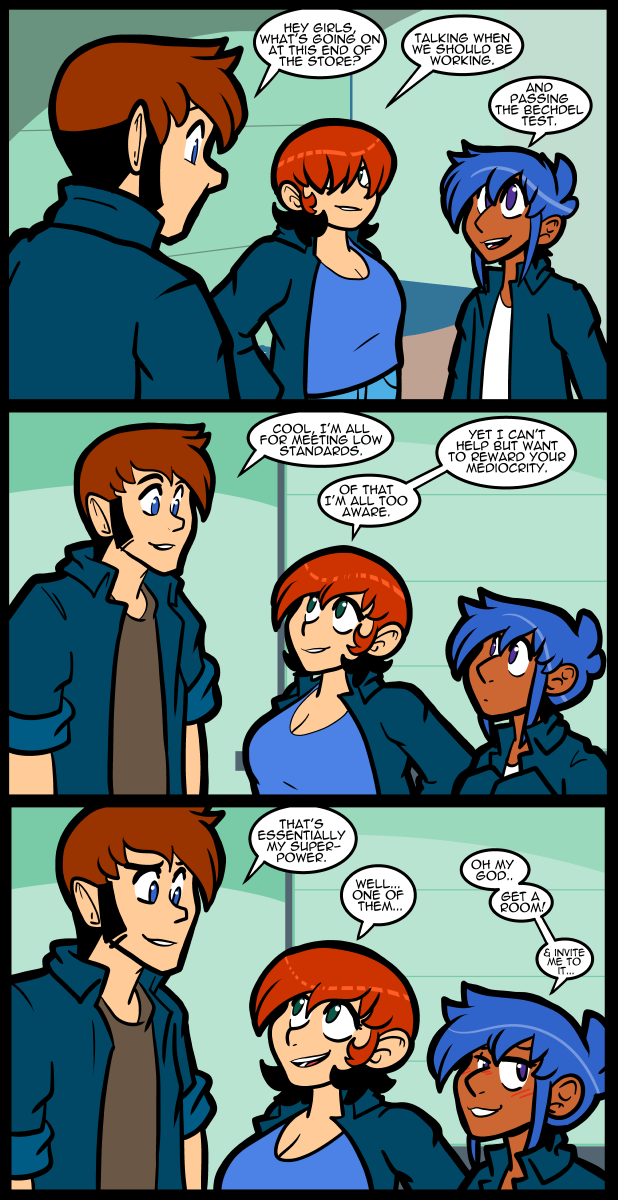 For those of you unfamiliar with the “Bechdel Test” AKA the Bechdel-Wallace Test it goes something like this:
Does a (work of fiction) have two female characters?
Do they speak to one another about something other than a man?
It is, arguably, a test for the bare minimum of gender equality in fiction. Pop culture has elevated it way above its intended purpose. It’s a very easy test to beat. You could just dress two women in bikinis and have them talk about how sweet their tits look in them and pass the test. Of course it was never meant to be anything more than a warning really, or a joke if we’re being honest, but it’s gotten bound up in gender issues in a way far beyond what it was built for.

Some really amazing things don’t pass it and some truly terrible ones do. You kind of have to look at the larger picture of things sometimes, but the test does at least succeed in getting people to stop and look at things, so on balance it’s a good thing. Unfortunately it get’s tossed around so much that it’s on my list of annoying things that get brought up constantly.

I no longer remember at what point any two of the girls first speak about something other than a man. Even before that point I know I made an effort to give all the characters clear motivations regardless of gender.

In any event the test comes around over and over for whatever reason. The first time I remember it being brought up it was practically a witch hunt in the webcomics “community” with everyone going over everyone else’s work, and their own, to prove how progressive and good they were, or weren’t. It became a badge to wear, or a weapon to wield. Much the same way the term Mary Sue gets used, or its male counterpart. It gets misused as a way to dismiss something without having to actually look at it.

Star Wars doesn’t pass the test. Princess Leia saves the boys and is clearly smarter than Luke, and every bit as smart and witty as Han, but she never speaks to another woman. Not once in any of the films. I’m pretty sure that none of the Star Wars films pass the test. Possibly the prequels, but if they do it’s only because Padme speaks briefly to a retainer, or some such thing. Not even E7 or Rogue One. Movies that have female protagonists. (I forgot about Maz in E7, which is pretty telling about that film in general…) The Clone Wars cartoons don’t pass until way late in the run as far as I can remember. Rebels gets there quicker since there are two female leads, although I couldn’t tell you when it happens specifically. It may be in the second season.

I’m not exactly sure, but I don’t think Harry Potter passes the test. In spite of Hermione being the brains of the operation I couldn’t tell you a single instance of her talking to another girl. Not even Luna or Ginny. It may, but I can’t remember for sure.

At any rate, I understand the point of the test. It’s an alarm bell. It basically asks people to think a little deeper about women in fiction, which is ultimately good and important when used as intended.

Ah Jo, I remember when you could barely put 4 words together that weren’t quoting a movie. Now look at you, Jo unleashed~

I’m fairly sure hermione has greeted mrs. weasily before but I think thats about it. maybe she talked to tonks? its been a long time since I read the books

I know she talks about talking to them, but I don’t remember conversations.

And also conversations with Professor McGonnagle, I believe. And being sassy the entire book to Professor Umbridge. In the books, at least she has a lot of conversations in the last 2-3 books with female characters about strategy, spells, things like that. Probably passes easily.

Probably, but no one knows for sure at the moment apparently. I expect there’s a list someplace.

Strange that Goblet of Fire is the only one of the bunch that seemingly doesn’t pass according to that website, seeing as they’re hosting an All girls school that movie

An all-girls school of background characters, yes. Less surprising in that light, I would hope.

She knows that these ones love her.

I just realized your avatar pic is of Reggie. Does this mean even the Creator admits Reggie is the best?

Well, it means that I recognize the elements of my own personality that make up Reggie at any rate.

I find the Bechdel Test to be a joke, mostly for reasons you spoke of. Especially since it doesn’t take into consideration anything about the movie.

A war movie about a group in Vietnam, is less likely to have females in it for instance.

That said, didn’t Rey and Maz talk about the force in Episode 7, meaning it passes.

You forgot to mention the girls talking need to be named.

E7 is so forgettable I actually had no memory of Maz until you brought her up. Maybe since she’s a weird little imp I didn’t register her the way I would a human maybe.

Very true, but it makes for an interesting academic exercise. If it came up in a seminar, I’d argue that for “Full Metal Jacket,” for instance, the Bedchel Test isn’t relevant to its subject matter.

The whole point of the test was to bring a sociological phenomenon to people’s attention, which it did.

This station is performing a test of the emergency broadcasting system. This is only a test.

This concludes the test of the emergency broadcasting system. We now return you to your regularly scheduled program.

This has been a sample test of your Area Alert System. It works. This is NOT a real test.

The point of the Bechdel Test is not whether any specific work passes it or not, but what a low percentage of works in general pass it, especially compared to the quantity that would pass a gender-flipped version.

It goes without saying, that Between Failures passes the Bechdel test, as we see in today’s page.

The 1980s film, Aliens [R], also passes the test. Not that it matters…but I don’t think that two of the women in Aliens, Private Vasquez and Ripley, really want to go out with each other. :D

So write the fanfic already. ;)

…..Private Vasquez turns around, and gives Ripley an infuriated stare! “You make the Marines mad!, You make the government mad! You, amazingly, also make ME mad!…But, you’re my favorite, sexy, pest!”

Vasquez passionately, and gently, grabs Ripley by the arms. Vasquez says: please join me now in my bedroom!…I have some photos of a beautiful, deep, moonlit lagoon that I’m just aching to expose to you.” -TRA

So, I’m at work right now and had this thought. Mike the manager does NOT KNOW Carol and Thomas are an item, correct? Will they be able to keep it a secret during their role PLaying session?
I think not.

That is a concern, yes. We’ll see how discreet they can be; he hasn’t caught them at work yet.
It’ll be an interesting conflict if Mike has to choose between getting rid of one or both of them when they’re among his best employees and keep the team running smoothly, or turning a blind eye to a serious violation of company policy. Wes finding out may be a greater concern.

This kind of “serious violation of company policy” happens all the time, and in my experience, I have never seen any official action taken against either party.

Everyone knew why manager a reported manager b’s pot use, but neither of them got in trouble directly for sleeping with her.

I have seen several other relationships start at the workplace, and none of them had any official consequences. Just don’t tell Regi.

Harry Potter, at least the books, is a little weird for it because it does a lot of “Described Dialogue.” That makes it easier to remember that two characters had a conversation, like Luna and Hermione discussing the creatures featured in the Quibbler, but it’s hard to remember if that conversation was actually verbalized, or just implied.

You have to be very careful with that when you’re writing. As a rule, I only use it when characters are rehashing stuff that’s already been discussed in detail.

The test has a third rule you’re missing: The two female characters in question have to have names.

That’s why the best movie ever passes the test. Back to the Future. Lorraine Mcfly and Linda Mcfly talk about Jennifer Parker, and their opinions of her, one negative, one neutral.

In the second one, Jennifer Parker exclaims in surprise about her appearance with herself.

But it isn’t really a test. It’s just a comment about movies two characters made in a comic strip.

But I do like it. And a lot of my favorite films pass it.

Sadly BTTF passes the test while treating Marty’s girlfriend like little more than a corpse for the better part of the trilogy. They had to solve the problem of having her in the car at the end of the first one, but not having any use for her in the second and third films. SO she gets left in the bleak past until the fix things and let it change around her. They could have chosen to include her, but opted for telling the story largely without her.

No. the best movie ever is My Neighbour Totoro. It too passes the Bechdel test.

Yeah there’s a whole thing about it on wikepidia and whatnot.

The purpose of the Bechdel test is not to test a movie, it’s to test the movie industry. Look at how high a percentage of movies fail, that’s where the punchline is.

Just for completeness’ sake, here’s the original Dykes To Watch Out For strip in which one character explains Wallace’s criteria: http://dykestowatchoutfor.com/the-rule. Note that it dates to 1985. Things have changed…Somewhat.

The Bechdel Test’s flaws are often why I dislike how reliant people become on it to test films; yes, that film fails the Bechdel test. No, that doesn’t mean it’s inherently misogynistic.

In fact, it was because of those flaws that when Pacific Rim came around, someone developed another test based on it because the character Mako Mori was such a good female character. I find it to be far more representative and useful. It’s called, appropriately, the Mako Mori test. It follows these guidelines:

a) at least one female character;

b) who gets her own narrative arc;

c) that is not about supporting a man’s story.

Mind you, it’s not meant to be contrary to the Bechdel test, and if films pass both there’s a good chance it’s doing fine. However, I do believe passing the Mako Mori test is far more important.

The less known corollary: The two women then have to talk trash about a third woman, their BFF.

FUN FACT: Sir Mix-A-Lot’s “Baby Got Back” passes the Bechdel Test. Right in the first 30 second!

Its a little more iffy it could pass Mako Mori: But we have two women, we know ones name (Beckey), the admittedly shaky narrative is of them discussing another woman which doesnt support a man’s story. Close, but arguable.

I don’t think it does actually. The second female character isn’t named.