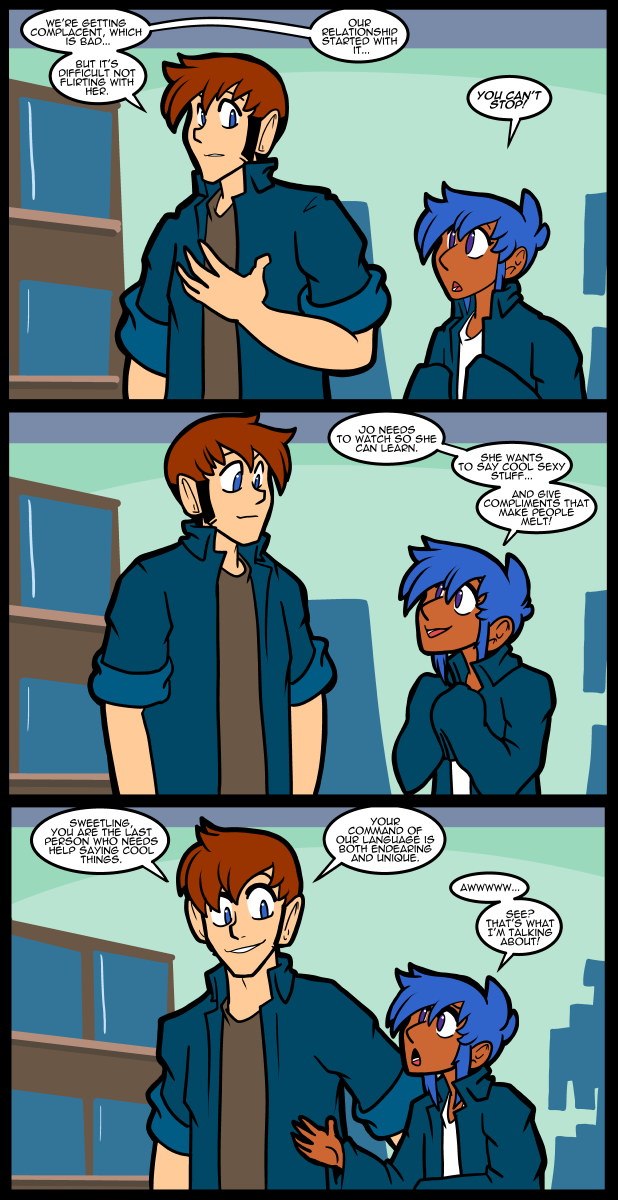 I don’t think Jo really understands her own powers. Of course a lot of people want to be what they aren’t while not seeing the good things that make them up. With enough confidence Jo could take over the world…

So the Teen is moving back in with us… That’s all I’m gonna say about that.

If you want to connect with other readers of the comic I’m going to post the Discord link again, because the general server has been pretty active and people have been very civil and inviting, even in the political channel. Here it is. If you don’t know what Discord is look it the fuck up. You don’t need me to hold your hand every step of the way. You’re already sitting in front of, or holding, a device that will bring you most of all human knowledge if you take two seconds to look it up.

It’s just a chat service. It’s just the flavor of the month and not annoying like Skype has become, and all the other ones. I go there when I’m between doing things and I’m super tired.

I don’t want to be the kind of person who goes nuts for Star Wars, but every time they throw out a trailer IT PULLS ME BACK IN! I’m instantly twelve again when they dangle more Star Wars in front of me. Also, people seem to think from my twitter comments that I didn’t like Rogue One. It’s a very watchable movie that has a very in Star Wars tone. It’s Star Wars with an unsettling level of consequences for your actions. That’s not a bad thing, it’s just odd to see it in the main franchise. It’s not perfect, but it’s enjoyable. I think it would have made a much better series than a movie. Or maybe there should have been a series that led into the climactic movie so I could have cared more about the characters I just met 30 minutes ago when they die.

Shes a walking encyclopedia of the most obscure and romantic lines ever written for movies, how much dialogue does she need o_O

ALL WERDS FOR HERS!

WERDS FOR THE FILM GIRL! CUTE FOR THE CUTE THRONE!
The Cute Throne is, presumably, Jess’ lap.

One [Jo] to rule them all, one ring to find them,
One [Jo] to bring them all and in the darkness bind them.
-Or words to that effect.
:)

In the land of megatainment where the Reggies lie

In that last panel his face looks like somebody else’s face.

Ok I’m only gonna say this once. Han didn’t shoot first. Han was the only shot. Big difference

Exactly.
That’s what happened in the original version of the 1977, Star Wars film. Lucas changed the scene, reportedly, because,”He didn’t want Han Solo to seem too bloodthirsty”.
I like the version, where Han is being held up, and he wastes the guy- It tells you, [my words]- that Han isn’t 100% a good guy/ as pure as the un-driven snow. It gives him an edgy reputation.

Yeah, he’s much more of rogue than comes across in the movies. You’ve known he was a smuggler from “A New Hope,” but the movies generally don’t mention much of anything about that side of him. For an intro to Han’s dark side if you’ve never seen it before, you can read the “Rogue One” book version or listen to the book-on-CD version as I did on a long road trip. It’s not as though he’s a bad guy really, but he gets involved in some pretty shady deals and there’s a lot of bad guys after him for money they think he owes them, not just Jaba. He’s got a glib patter for those guys whenever they show up, too. It’s pretty funny, really.

Thanks! I’ll try to get a copy of Rogue One, and read it. :D

Kind of like where Mal shoots the guy holding one of his crew hostage with no hesitation, or kicks an uncooperative bad guy through an engine intake. He’s pretty easy going most of the time, but he has moments.

Speaking of Rogue 1, I could not recommend HISHE’s parody (https://www.youtube.com/watch?v=RjR71XpAu0I) more. Those guys are fucking brilliant (:

Joe is so envious of Thomas, even though she has Jess. Good Lord to get a girl like that you need plenty of skill

Is the title a reference to the don Henley song driving with your eyes closed?

I like how the last panel in particular gives perspective on how much taller and broader Thomas is than Jo. Helps a tall person like me understand a bit why Jo might find the world a little intimidating.

Maybe my information is wrong, but- was yesterday your Birthday, Jackie?

Your information is wrong. My birthday is March 20th.

Happy late birthday. My sister’s was the 18th. I got her a skillet.

Cool. Thanks. Some posts on other sites had lead me to false info. C’est la vie, and stuff. :D

Out of curiosity, is Jo and her “endearing and unique command of our language” based on any actual people? If so, do you mind of I ask who?

He manner of speech is mostly me. I like to twist words around and find new uses for them. The rest of her is a mish mosh of girls I worked with and a couple of boys as well.

Wow. Seems like the teen lasted about a month. I don’t blame her though. Moving out and separating yourself from your support is a drastic step. One that shouldn’t be taken lightly.

Glad to see she’s not being stubborn and bulling through whatever situation caused her to return. Teenagers can be stubborn that way sometimes.