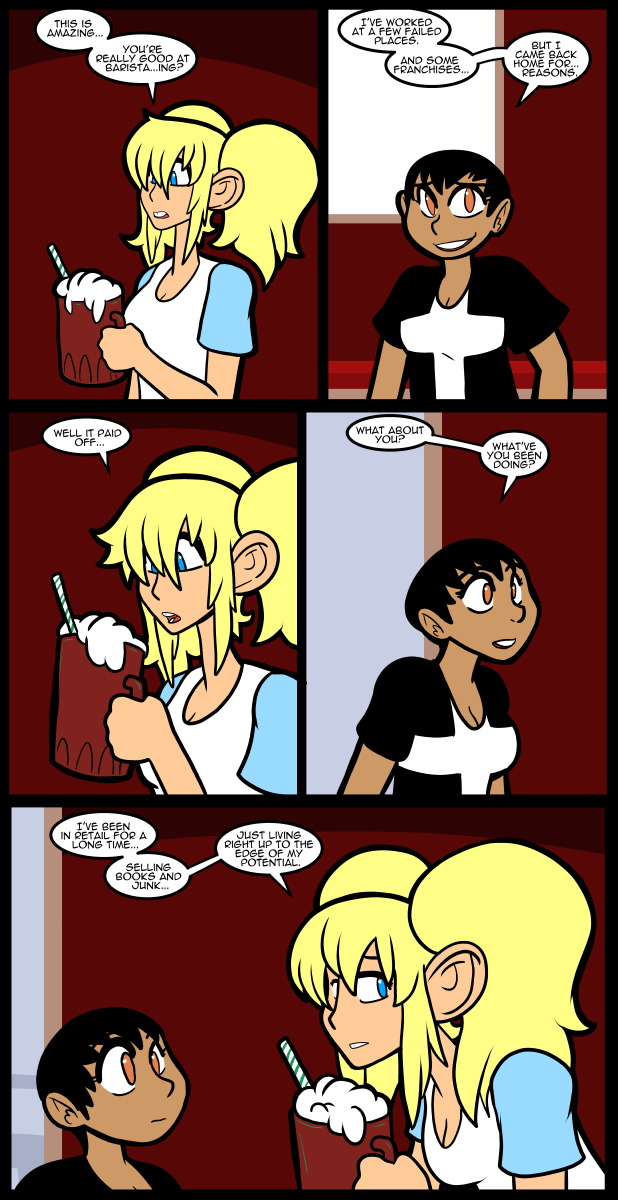 Generally speaking aiming for center mass is the safest option when shooting for something. The top tends to be a much smaller target. Be reasonable about where you aim doesn’t make for a very good motivational poster though. That said it would be hilarious to see a series of them.

“Someone has to be the foundation”
“The world needs ditch diggers too.”
“Being number one puts a target on your back.”
“Good enough gets the job done.”
“First place doesn’t mean anything without a runner up.”

When I was in middle school there was a drawing contest for the school mascot and I entered because I was, essentially forced to. I ended up winning because they didn’t force anyone else… That was the first time I truly understood how empty victory is if there isn’t an opponent, but also that you miss all the swings you don’t take. Also, even when done quietly, it is glorious to bask in the failure of your enemies.

Leading the Charge makes you a target for both enemy and friendly fire.

Maxim 15. Only you can prevent friendly fire

And tracers work both ways.

I assumed sugar and caffeine was responsible or much of her behavior.

Eh, I say reach for the stars! Just make sure there’s a net below where you’re jumping first. Otherwise you end up $30,000 in debt with nothing to show for it!
…
…
…
Seriously, set up that net.

What’s better — being average amongst the elite, or being respected amongst the underdogs?

There’s no need to fear underdog is here

There was a t-shirt in the 1980s, that was a comical t-shirt, + it was designed so you wouldn’t be inspired by it.
It said: “Avoid disappointment! Aim low.”

If at first you don’t succeed, give up

if at first you don’t succeed, skydiving isn’t your sport.

I’m paraphrasing, here: the PBS TVshow, This Old House[R], says that, [right now], there is a shortage of people who can do the carpenter jobs, and carpentry-related jobs, + plumbing-type jobs, [and car repair jobs?] in the USA.
The hosts of T.O. House say that- in the USA, if you train for the right carpentry orplumbing jobs…if you can stand the physical labor of the job, and the [getting messy part] of the job: you can get a good job, a job that might pay better than the average accountant’s job.

[Full disclosure]- I don’t know if any of the above info or “propaganda”, from This Old House, is true or not.

Speaking purely theoretically, it sounds reasonable. It is skilled labor, difficult to get into, and perceived as grunt work. Not a lot of people will go into it because they assume it is poorly paying, or just because it is “beneath them”. Supply and demand kicks in, and your plumbers and electricians and carpenters can more or less set their own rates because they are needed and there’s no competition.

But that should be a temporary state. Remember, we had a lengthy recession that put a huge damper on new construction. A lot of people left those currently-undermanned industries due to lack of demand. Now that the demand is there again, people are going to come in to fill the void. Competition will drive prices down. Not to minimum wage burger-flipper, mind you, but… lower than they currently are.

If you want to read volumes about this, follow mike rowe on Facebook and Twitter. It’s his life’s mission to spread the word about working professions and their merits.

Three cheers for the host of Dirty Jobs and Deadly Catch! May his continued success bring dignity to those who deserve it but don’t get it.

Over here there is another hurdle that prevents just anybody getting into the business at the drop of a hat. Well except for those shysters that take the money, make things worse and run.
It is the required apprenticeship followed by certification and licensing, which comes with prorated insurance.
Even in an economic downturn the professionals can earn a living just keeping the stuff already out there up and running. It is the apprentices that take the hit each and every time but that is the entry fee to the profession.

Don’t remember where I heard it, but supposedly in medieval heraldry the concept of an honorable second-place loser was represented by the wild boar; they were reputed to put up a fierce fight, but ultimately destined to lose, and become just quarry.

Even losers cab be dangerous opponents. Remember that

Sincerely hope that is no justification for the infamous “Second place is the first loser” proverb because that proverb is pure bullshit.

You just sent me into the warm fuzziness of nostalgia for Despair.com. I don’t know if that’s technically ironic, but it’s a reasonable facsimile.

Despair.com is still up and in business.

the world may need ditch diggers, but it doesn’t want to pay a living wage to one

Depends on which part of the world you are in.
If there is a referee armed with the equivalent of a baseball bat wrapped in razor wire, then everyone plays fair.
No to find referees that can’t be bribed.

If the world doesn’t want to pay a living wage to a ditch digger, then you call a revolt against the system.

First you need a teacher (apropos of not paying a living wage) to tell you how you go about it.

Ditch diggers with $30000 backhoes, $10000 trailers and $50000 trucks and OQ qualifications can pretty well charge what they want.

Yeah, but charging what you want doesn’t guarantee business. Sometimes, you have to look at the market and the value of the service and determine what people are willing to pay.

Well, we have to use that whole “achieve great things” message going on to try and keep kids from following all their natural instincts about having lots of sex at a young age, drinking heavily, and more. Course, what no one really notes during the “you can do anything if you study hard” messages is that, even if they live up to their end of the bargain, there’s a very good chance the payoff will never happen. So remember kids, study hard, and don’t cause us any problems! We’ll try to keep you motivated with tales of future success, but your odds of becoming an astronaut are shockingly close to nil and we’ll take no responsibility in the event you become a college-educated barista despite LITERALLY EVERYTHING WE TOLD YOU IN HIGH SCHOOL.

Your odds of becoming an astronaut are shockingly close to nil.

So are your odds of becoming a pro athlete. Yet our schools squander vast sums on athletics and fill kids’ heads with such dreams.

At some point, we all have to stop telling children that they can do anything, and that they’re all winners. SOMEONE has to LOSE. Deal.

Agreed…
…but it doesn’t have to be the SAME someone every time.

An essential part of losing is not letting it crush you, because as long as you’re not dead, there can still be another try.

Kids do need motivation to pursue future careers though but not as excessively as it was displayed in the early 90s to help fuel the “self-esteem” movement which only now is crashing and burning in a smoldering heap. We have to set kids on the right path to show that life is challenging and will be met with excessive disappointments but those disappointments should be used as fuel towards accomplishment. Respect yourself and your fellow man, work hard, don’t hold grudges and turn the other cheek when hurt. Do so and you’ll ride out life through all its calm and stormy seas. ;)

self esteme without actual self motivation just makes you an ass.

So what if the pay off doesnt happen. You may not get the BIG grand prize but you get a Better life than being some doper sitting on the couch stoned out of your gourd. Wasting oxygen and wasting your life away

“In the long run, [people] hit only what they aim at. Therefore, in general, it is best to aim at something high.” –Abraham Lincoln

Aim for the stars… So that when you miss, you’re too busy dying from lack of oxygen to care about how close you came.

“If you stand on your head to try and make others happy…all that you’ll get is a headache!”

Shoot for the stars, that way you’ll be too busy dodging the bullet that’s plummeting towards you to be disappointed you missed

Demotivational posters…. there are many websites. ‘If at first you don’t succeed, burn all evidence you tried.’ ‘Get to work: you aren’t getting paid to believe in the power of your dreams.’ ‘Adversity: That which does not kill me merely delays the inevitable.’

Here’s another t-shirt slogan:
“I’m Number 3! I hardly try at all!”

Jackie put this pun on Twitter:
“A warrior loses both arms and decides to become a singer known as the no holds bard.”
Bwa ha ha! That’s excellent!
That’s an amazing, mind-blowing pun, Jackie. :)

Center of mass is easiest to hit… but I aim for the crotch. >:3

So does Massad Ayoob. Says it makes suspects more nervous than aiming at center mass, and he can see their hands better.

Aim for the best Put the bullseye on your chest and DARE people to hit it. When they come up short Try to teach em to be better dare em to do better. CHALLENGE the world when the world tries to hammer down the outstanding grab the hammer and

Play for perfection victory comes with the attempt.

I wonder what she’s drinking? It’s a bakery/coffeeshop, but that’s a frosty-mug type of mug with a straw. Root beer float?

When I want to indulge myself, I’ll do without any sweetener, & float a scoop of ice cream in my hot coffee instead.

That’s way larger than any affogato I’ve ever had! Do they come that big in places?

“Don’t get noticed, don’t get into trouble.”

“If you all work too fast, some of you become obsolete.”

“Hobby’s can give fullfillment too.”

“Good Enough Gets the Job Done” – the only proverb in that list I don’t agree with. It sounds to me like an excuse to justify laziness. :/

Coffee in a stein. This is needed at ALL THE PLACES.