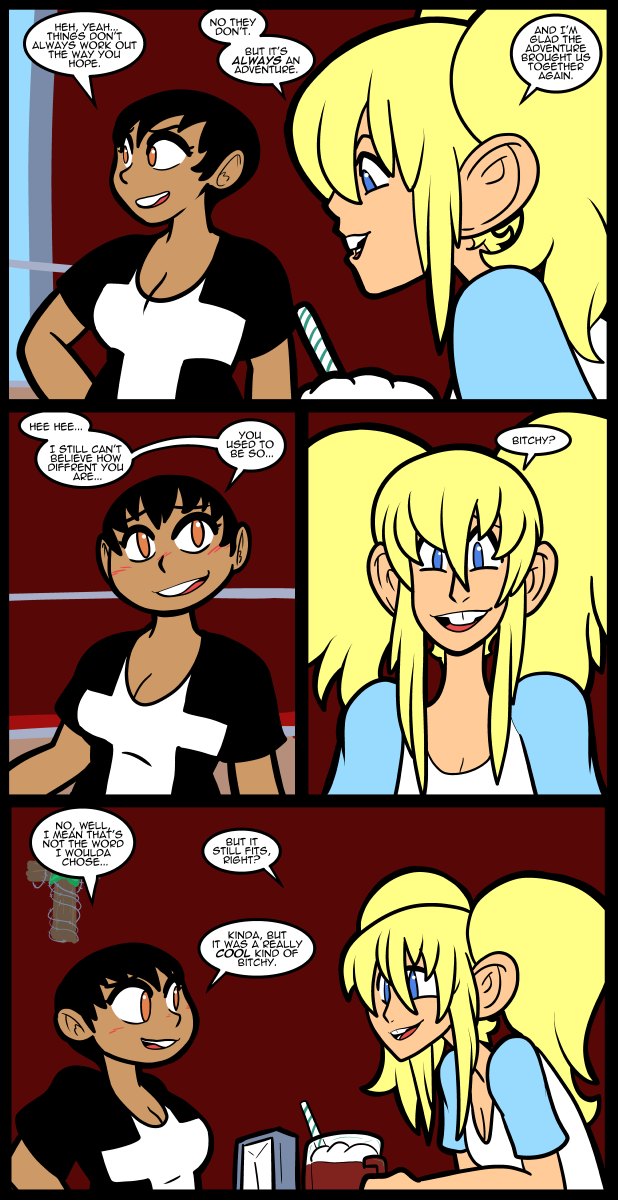 The other day I picked up my old copy of Final Fantasy GBA and ended up playing it for a while. The GBA version is much easier than the original, and more enjoyable if you don’t want to spend a lot of time grinding endlessly. The PSP port is much the same, which I also have, although it looks better than the GBA version in some ways. FF1 is very replayable. Unlike 2 which is a hot mess and horrible to slog through. 3 is okay. 4 is great. 5 is fine. 6 is a masterpiece. then we get past the SNES/NES days. I’ve got most versions of Final Fantasy 1, 4, and 6, and a couple of versions of 2, 3, and 5. They tended to get collected in groups so to get a good one you had to get a crap one. The DS updates of 3 and 4 were pretty good. 4 particularly. It’s a real shame that they never gave 6 the 3d upgrade since it was the best of the era.

Anyway, it made me remember how much I wanted to make a game sort of like Final Fantasy when I was a kid. I wonder how hard it would be to do something like that now since it’s not that complex anymore. Maybe I could kickstart one. XD

That’s a great word. It would make a good title for a 1990’s themed hip-hop mmorpg/dating sim, World of Bitchcraft.

Dungeon levels of Compton, Atlanta, Detroit, Chicago, and Philadelphia. The losers end up in Dothan.

don’t forget there need to be classes for females, too

Typo in the first panel:

Agree with you whole-heartedly on the Final Fantasy ratings. Though 8 is my number 1 choice, 6 then 4 and 1 are right after. Though Tactics is really my bread and butter. I can play that game forever. Literally. I usually get to the point after perfecting my job and ability set-up where the final boss will actually run from my main character and I’ll have to chase it down to kill it. Currently playing through the re-make of 6 on Steam ( I guess it’s from PSP?) anyway, it’s the version that got cinematics for some scenes, so I’m getting to see those in-game for the first time. Good times. :)

FFT, if you aren’t aware, was created by people from two different dev teams. FFT was made by Matsuno, who was the guiding mind behind the Ogre series. So if you’re looking for “more” FFT, you might want to check out Tactics Ogre: Let Us Cling Together, which is an amazing title with the same depth of character and even more plot. The PSP version includes a huge amount of Quality-of-Life improvements, and would be the one I’d recommend. The SNES version has very different gameplay, which I’d generally recommend only for those interested in the history of the game/series, and much less depth of writing. The PSX version is the PSP version with less power/space/extended scenes/etc., and offers no real benefits over the later incarnation.

That tactics Ogre game is practically impossible to get a copy of now, unfortunately. Or at least it was when I was last looking. Even the PSP port of FFT is basically unobtainable.

You can pick up copies of the PSP port for like 10 or 15 dollars on eBay, if you don’t mind buying from there.

9 will always be my gold standard for FF, mainly because I missed 6. 9 is so polished and put together, I can’t help but adore it. If you only consider the first two discs of 8 it would be my #1 as well, but the way it just falls to pieces in the second half turns me off.

I love FFT as well, but I just plain don’t have the patience to truly master it. Another squad-based tactical game that’s totally awesome is Fallout Tactics, believe it or not. It’s not as deep as FFT, but then what is? The old-school Fallout system makes for a surprisingly beautiful tactical engine. I just wish there were more missions vs. Super Mutants and Reavers and fewer versus the ultimate enemy.

On the topic of “making a game sort of like Final Fantasy,” you might look into in the “RPG Maker” software line. It’s a series of tools that allows people to make their own JRPG style games, with a rather robust community of game makers and asset creators (art and music). Just be careful about the license restrictions of any 3rd party assets you want to use. If you can make a game, you can (try to) SELL the game, and some assets are listed as non-commercial use only, others with fees for use, etc etc.

on the subject of kickstarting a traditional styled rpg: i’d say go for if you have a solid concept. there is a market for traditional rpgs since most of the old guard franchises have taken more action oriented approaches. i’d sure be down for a simple, random encounter, turn based battle, and numerical level rpg that isnt pokemon.

And certainly don’t make another Pokemon Go. Although, it would be neat to do a cross of Pokemon Go and Mario Cart… just to spice up the news cycle.

Final Fantasy VI forever. The ultimate expression of what the series (and the SNES) was capable of, in my opinion.

Sad trivia about FFVI: Current Square execs are puzzled by the US demand for a 3D remake of FFVI, because it sold like crap in the US on its original release. Probably because people like me couldn’t afford the $70 and just rented it a bunch of times.

Also, another Square exec tried to take advantage of the nostalgia by implying if the FFVII remake sold well, they’d have the money for a FFVI 3D.

Sad thing is, the FF VII remake will sell because it is FF VII so a remake of FF VI may happen, albeit with real-time battles like the VII remake.

Me thinks from all the blushing Evrina is into the same sex.

The original Final Fantasy will always be the textbook example of a perfect RPG with lots of replay value. Even if you know the story from front to back, the chance to do it over with a new party setup gives you new challenges and strategies to work off. And of course, you haven’t really beaten the original Final Fantasy until you’ve taken the 4 white mage challenge and the 4 black mage challenge. ;)

Final Fantasy II had, in retrospect, an interesting concept with the skill system which was badly in need of an upgrade after the garbled version that exists on the Famicom. (Capping ANY skill aside from Cure magic was a chore in of itself) and babysitting Leon at the end of the game was a total letdown. At the very least, Leon’s skills should’ve been the resulting average of Firion, Maria, and Guy’s skills. However, as long as you’re not an obsessive grinder, the game is not all that bad. Plus, the story is incredibly dark with Emperor Mateus Palamecia being the textbook example of a distinguished asshole. In my view, Mateus is one of the most underrated villains in all of Final Fantasy and should stand amongst the greats like Kefka and Sephiroth.

VI also deserves the 3D remake as well as V. Admit it, the customized job system in V is just ridiculous fun! :)

FF2 can be a bit of a slog, but here’s a few tips.
-Leveling up most spells is a trap. Only Cure and your main attack spell (Fire, Thunder, Blizzard from the start of the game) are important to level. Life is worth learning as well, but most other spells should be cast by using the tome as an item in battle (yielding the 8th level variant).
-Get two shields early, and take the time to level them up to 5 or 6 (this doesn’t take long) ASAP. Your evasion will skyrocket over time, making fights WAY easier.
-Once your attacking spells and evasion are really good (you’ll identify this when you see it, it happens very early if you’re playing casually) start weapon-and-boarding sometimes.
-As a more general RPG tip–use money and items liberally! It’s better to wait a bit for the next weapon or armor upgrade (best stuff is unique anyway) than to not blow those sweet, sweet consumable resources trivializing things.

This should make your life way, WAY easier if you want to bother seeing the game. Not ESPECIALLY worth your time, but I always get salty at hard games and want to come back and stomp them.

I just noticed that Nina’s neck is pretty splindly. Has it always been like that? Since you draw the bodies mostly pretty realistically, it struck me as a little odd. I’m pretty sure it’s a deliberate decision on your part. Yeah, just wanted to share that thought for some reason.

This is still my favorite web comic by the way. I always look forward to it but almost never comment. So please don’t take this the wrong way, I really couldn’t care less about the characters’ necks.

There is a webcomic named: Leftover Soup by tailsteak.
To paraphrase a quote from Leftover Soup- [ It’s kind of an unwritten rule, that if you’re a teen boy or girl, who is about 13-14…that it’s kind of your job, to act like a feisty, rule-breaking b*stard, around your parents].
I’m not saying that anyone should, or should not, act like that…but that this is just something that happens to a lot of people, when they are around 13 to 14. *shrugs*

Funnily enough I am in the process of creating a JRPG called SlamDunk. I have so many ideas for it that its proving to be a slog. I’m in the process of creating an overworld map which so far is about the size of a moderately sized European country. That isn’t even the hardest part either. I still have to do the battle system, the character portraits and all the fluff like potions and everything. This is going to take at least a year to get everything I want to be.
So yeah if you want to do it, I use RPG Maker VX Ace. Don’t do what I’m doing; make it small. I am starting to regret undergoing this.

I think J-themed-RPG would be a better connotation here unless you’re actually Japanese. :/

Didn’t occur to me there would be a distinction ‘_’

I’m actually a pretty big fan of Final Fantasy 2, funnily enough. I also like FFTA a lot, so go figure. I think my main reason is how easy it is to get ridiculously strong once you understand how the combat system works. I remember spending hours fighting the knights in Fynn when I still had Minwu in my party. I definitely needed a guide to get through it all the way my first time, though. The art style and music of the game was also a big plus for me growing up.