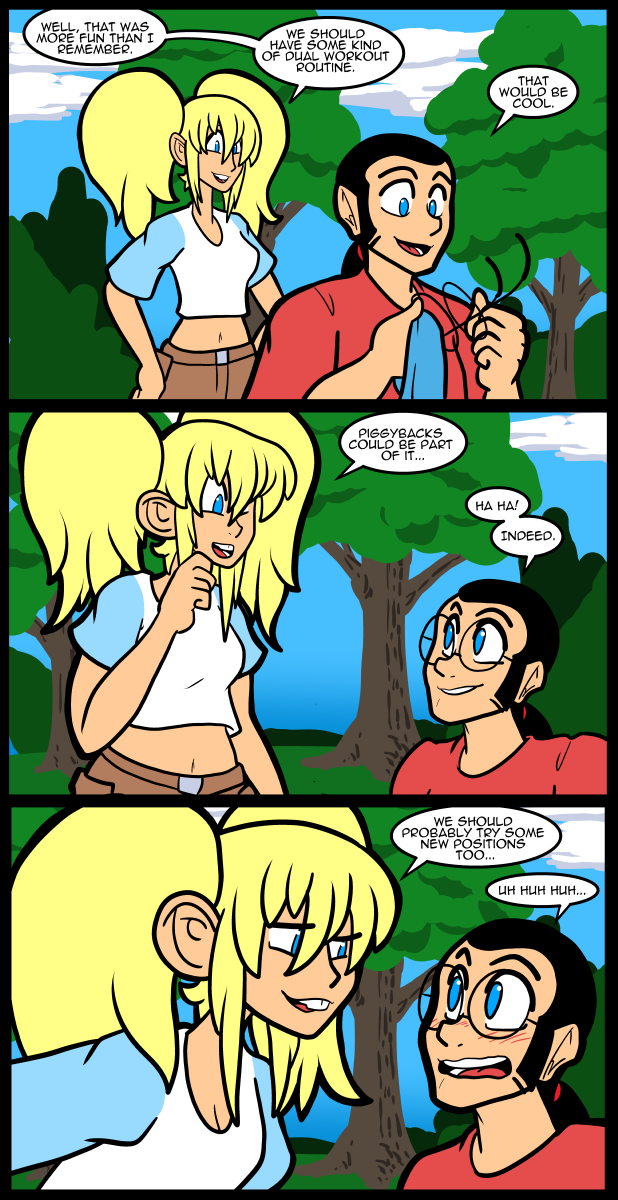 Nina is going to spend their whole relationship bending over slightly and/or looming over him.

Yesterday I decided to go to town with mom on a whim. We were only going to be there for an hour or so. I figured I wouldn’t be in the heat long enough to start feeling unwell. Unfortunately I started to feel it before we left the building. I knew I was in trouble as we were loading the stuff and I knew it had been too hot for too long. On top of that we had a flat tire… Mom keeps an emergengy electric pump so she aired it up long enough to get to the repair place. I sat in the truck as the ac struggled to compensate vs the outside. It took about 30 minutes before I was back on a more or less even footing, but when the tire was being repaired I had to stand in the shop, which doesn’t believe in air conditioning. So it was a good long time of being way too hot and nearly passing out twice, although I didn’t let on exactly how bad things were. I figured if I fell over it would become pretty clear to everyone anyway.

Once I got home I just laid down and slept for quite a while. When I finally woke up my whole person was sore, but I knew I had to do some work while I was fresh enough so I did all the sketch parts of this page, then fell asleep sidelong, on the floor for a while, with my headphones on, listening to whatever youtube decided I needed to hear. Some time later I woke up and finished the inking. By that time it was time for lunch so I decided to make a sandwich, but I was apparently still a bit off from the day before so I started sweating and shaking badly about halfway through the task. I ended up back on the floor sleeping for three hours before I needed to make dinner. By then it was near sundown so it was cooler in general, so I managed to cook for dad. I felt too sick to eat. Once he was squared away I laid back down again, but forced myself back up in a couple of hours to finish the page. Which brings me to right now.

I will likely lay back down as soon as I finish typing. I still feel messed up and that seems to be all my body wants to do now.

Ed, if you don’t take that woman to your bed right now while the coffee is still working for you, you better be dying or close to it.

Hopefully not bending over only slightly…

I hope you feel a bit better soon. I’ve always hated summer. It’s hard enough to function on a cool day, but when it’s hot, simply keeping a meal down is 3x more difficult. Blergh.

Ehhh, i don’t think Nina pushed hard enough to get an ear blush. There is also the caffeine that is coursing through his system at a high rate that may be countering it.

SO MUCH SEXUAL TENSION

Yeah she really putting on the sexy.

This is almost the standard male reaction, as best I can tell. It’s like being on a Starfleet vessel bridge whenever anything more than “moving forward” happens. Everything’s shaking, parts are exploding in showers of sparks…all that sort of thing.

“When she started talking about ‘other positions,’ that was when we lost the saucer section. I don’t mean it was destroyed, I mean we lost it. It just vanished. It’s just GONE. It’s likely somewhere else all in one piece, but we have no idea where that is. We suspect Q.”

“We still have the stalk section at least. In fact it looks like it somehow grew.”

That’s going to be a killer on her back.
What people don’t do for love.

I dunno, your call, but I wrecked myself, one afternoon, trying to finish mowing the grass on the front yard and the back yard in the same afternoon. I can’t ever afford to pull that s**+ ever again. Life is short, I’m too young to pull the rip cord now. No stupid ‘muscle-ing through’ the heat for me.

Pull the rip cord? Isn’t that what you do to relwase the parachute and *save* your life? Why would you want to delay that?

Non riding mowers are traditionally a pull start. The pull is a ripcord to get the engine to start up. It is a bit physically intensive and requires a lot of force

KISS HER YOU IDIOT!

Damn, I wish a girl ever flirted with me like that.

Dammit Nina, you broke him. You shouldn’t break your toys.

:( I hope you feel better soon. It really sucks when capacity runs out even sooner than one expected it to.

Ed if you don’t take that woman so help me I will slap you until you’re 6’2″.

Heat stress is bad news. Make sure you’re well hydrated even if having trouble with food. Obviously staying in a cool location is good, but sadly not always practical. Cool gatorade can do wonders, as it does have most of the electrolytes and stuff. I tend to stick to the low sugar flavors, but if you’re having trouble keeping food down, the sugar could be nice.

Nina kind of looks like an anthropomorphic chipmunk in the last panel. Not complaining.
Dude. We are not so desperate for updates that we want you to “push through the pain”. Take the time you need and try to take care of yourself. We’ll be back. We probably all frequent a lot of sites that do not update as often or as reliably as yours. We keep going back.
It’s weird how different our conditions are. I leak surveyed most of the day in 100 degree temps (running 5mph in the ditch) and didn’t run the air conditioning till the trip home, but cold temperatures literally make me hurt. Course, I’d have been paid for if I’d had to do anything strenuous in the heat.

Gee, Ed, I could be wrong, but I think your girlfriend there wants to make the Beast with Two Backs with you. On second thought, I’m not wrong. What are you standing there for?

I’m still waiting for the “is that a wand in your pocket or are you just happy to see me?” joke from Nina.

“fell asleep sidelong, on the floor for a while, with my headphones on, listening to whatever youtube decided I needed to hear. Some time later I woke up and finished the inking. By that time it was time for lunch so I decided to make a sandwich, but I was apparently still a bit off from the day before so I started sweating and shaking badly about halfway through the task.”

Are you suggesting a diagnosis of delirium tubens?

Doctor, I can’t diagnose nothing.

Full disclosure: vitamin c needs to be refrigerated or else it turns into crap.

I’m sure Nina wouldn’t mind bending over for their relationship.

And talk mischief with Nina! That was the other thing. :D