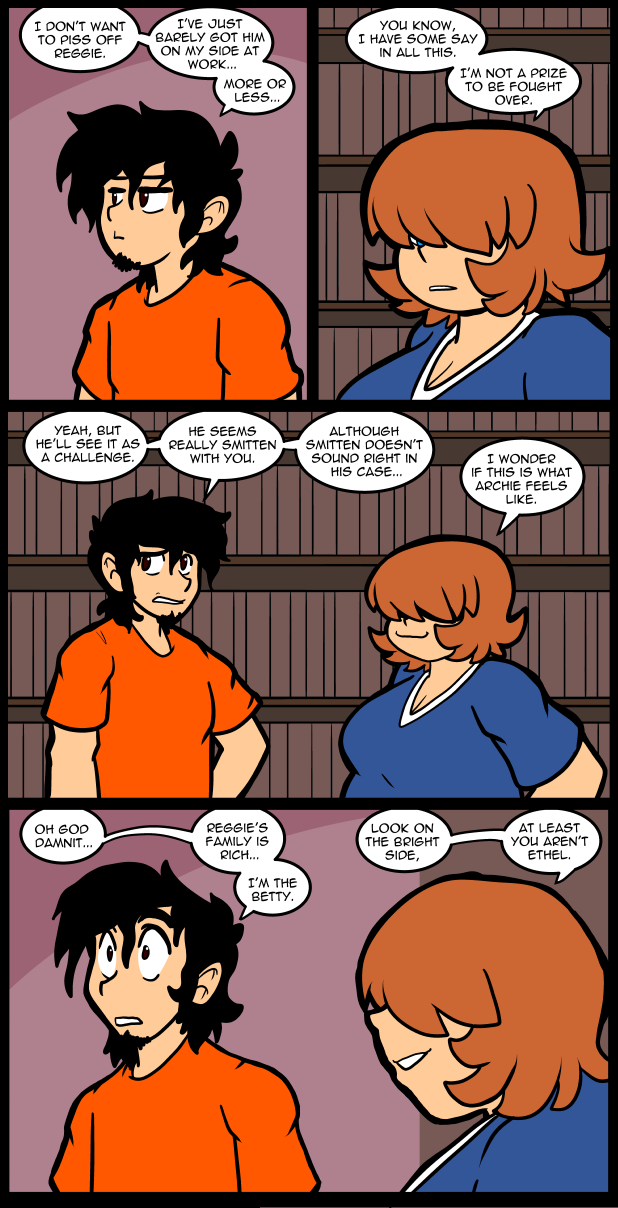 So anyway, when I decided to add Alex to the comic I didn’t want the fact that her hairstyle hides her eyes be the thing everyone gets obsessed with, so I showed her with her hair in a different style right away. In this section. I believe the blog in that section says pretty much the same thing I just restated. Anyway, Alex is a very busy girl. She plays online games, works at a library, reads, does cosplay, and probably other stuff I haven’t mentioned. She may be the most casually active character in the comic apart from Jessica. Of course she’d also like to do some ghost hunting with John, although it would likely be more accurate to say that she wants to be alone with him in a dark room. John came a little too late to the idea that he might want that too. Although all is not lost since she has agency too.

I actually hesitated making the Archie comics reference because I’m not sure exactly how culturally relevant they are these days. I’m know they’ve done a million new versions in the last 5 years or so, and there’s another attempt at a tv series coming up, but I wonder if kids read them as much as when I was a kid. I know they still sell those digests in Walmart. I end up with a few here and there from people giving them as gifts and stuff. A lot of those things are recycled from as far back as the original run of the comic, but they still work because the stories are time less. Although some look dated, especially when they use phones, and the old clothing styles are all 50s and shit. It’s kind of neat how you can roughly date an archie comic based on the clothes.

I drew this entire page in the waiting room of the Teen’s psychiatrist. Certailny not a feat worthy of bragging about, but worth noting in that it’s just another time switching to using the Surface has saved me from being late. I’ve had to go to town for one random ass reason or another for the last handful of days. As soon as I got my tire fixed I became the horsecart for all the teen’s ridiculous activities again. We can’t get her into that fucking car fast enough as far as I’m concerned. Of course the car situation is just going to cause a million other fucking fights so really it’s just going to change the nature of the irritation rather than the amount of it.

It’s a ford escape, which I forget if I said before. I like it better than the litte car she had before that we didn’t use because the new one has space enough for me to get in and out. it’ll be way easier to deal with teaching her since I won’t be in constant agony from riding in a tuna tin.

Exactly. I was wondering when someone would mention the [Reggie from Between failures], and the [Reggie from Archie comics] comparison.
IMHO- Archie comics were still read by eager fans, in the last 4 decades, so, at least, the people who love pop culture will say that Archie stuff is still a thing.

No idea who Archie is! Maybe its an American thing, or maybe I’m too old (at 36 I’m rarely too young for anything any more) but I enjoyed the comic anyway despite not having a clue!

One of the oldest running comics. Archie is just as old as DC and Marvel. They recently started a reboot of the comic’s a couple years back and a live action show called Riverdale based on the comic. Also, Sabrina the Teenage Witch, both the comic and the old sitcom starring Melissa Joan Hart, we’re spin offs from the Archie franchise.

Archie is like the most American comic series ever. If you want a look a outdated American culture you should look up a couple.

75 years and still going. One of my sisters still reads/collects the digests and there are a LOT of them.
I just Googled the reboot with the ALL NEW versions …. meh.
Holy bleep – Jose and the Pussy Cats
Riverdale the live action TV series looks like something to be avoided though.

But this would mean Reggie Boothe is the Veronica, not the Reggie Mantle.

I believe that was the punchline: a rich girl and a mostly broke girl competing over a middle class man. Just change the ladies into men and make Archie a somewhat introverted fat chick and we’ve got this comic’s parallel set-up.

Wait, I thought John didnt like Alex romantically, only as a friend?

There’s been some hints that John was jealous when Alex got asked out by Reggie.

I think that has been out the window for awhile. Too bad in some ways, since, although he explained it in a douchey way, he did give that (accurate) monologue when she first appeared, that he was not required to be attracted to her simply because she was attracted to him.

I actually like that you see some of Alex’s eyes. Even coming from the idea that we don’t normally see her eyes, because one could find some Symbolism (dun dun duuuuuuun) that her eyes peak out when she’s having thoughts about how she isn’t just a prize. Kind of like, the woman beneath the mask.

If the show Riverdale is considered, Ethel would be bangin as hell. I mean, did you see Miss. Grundy? No reason for that. Also I have just stopped myself three times about to start ranting and nitpicking about Riverdale because I’m an annoying hipster. I’m also high.

One of many core stoner rules to follow: NEVER argue while high if your intent is to win.

Actually, there’s TWO Archie references… the title is one also. Because yes, I’m right there with you.

Ethel’s name is Ethel J. Muggs and I have no idea why I know that.

So who is BF’s Jugghead then?

I take that back. Mike would be Jughead. I think Nina would be Sabrina. I could see ed as Harvey. Reggie while not as bad as his namesake fills the roll. Tomas and carol, Allen and Josie. John as Archie. I picture Ed’s sister as Veronica. Betty is a tough call not brookise though. For som reason is her as a nick bukeye style Salem

This feels all too familiar.. A bit.. early BF “Familiar.”

I hate comments like this, cause I can never properly parse out the tone.

I picked up a number of Archie books through humblebundle a while ago, and read all of them. I think there’s quite a lot of fun stuff, but I’m probably a bit old fashioned anyway. It was both interesting and annoying though that some collections had the same story multiple times, but drawn in different decades – they recycle scripts whenever they can’t come up with a good idea it seems. And some of the modern reimaginings (zombie Riverdale) was quite fun. And I really recommend the ‘Archie marries …’ series as they show what the future could be like for dear old Archie once he decides to marry Veronica/Betty

Surprised no one’s mentioned that Alex is also a redhead whose name starts with A…! I suppose Jughead would have to be one of her friends, though.

Also, I totally loved Archie’s Sonic the Hedgehog comics as a kid.

I’ve come to consider Archie to be America’s version of an High School, Slice of Life, Harem manga. It has all the necessary characters. The only thing missing is the fact that manga stories eventually end.

Also, have you seen Big Ethel lately? She’s sort of a brunette version of Nina.

Archie Comics. They continue chugging along in the background as a constant. Some people find them when they are young, some when they are middle aged & some when they are older. I found the comic when I was young and about every 5 years or so I reread/buy a few digests sized specials. You can usually find them in the check out lines in super markets.

They recycle older story lines even to the point of reprinting old ones. I have noticed they have been editing the older strips to be more PC now. At times the revised or newly drawn panels/pages stand out.

The Archie comics are a kind of comfort food. Also, the way they have the relationship tug of war between Archie & Betty & Veronica, the reader could always find strips to fit their “Head Canon” of who he will end up with.

I have an Escape, and I love it. In the 10 years I’ve had it, it’s only been in the shop twice (and the first was under warranty). Mine is a hybrid, and both repairs have been related to that. Very solid vehicle.

Weird thing about Archie comics… they’ve been staying rather relevant with some really interesting storylines. Multiple continuities, like spidermans. There’s one where Archie is dead.

Also, they’ve been publishing ’em forever. Someone’s buying. And really… a couple geeks in a library are a-ok for making niche literary references, because… like, there’s too much world for there to actually be a “mainstream”. It’s just a big ol’ pile of niches, and it’s fun to explore other people’s.

That… sounds dirtier than intended. Not untrue tho.

Everyone has a niche to be filled with something. There, I said it. Sue me.

Lol this went right over my head. Never read Archie. I’ve seen it for the first and only time, maybe ironically, while living in Canada as the sister of the girl I was living with had a few volumes laying around. I never touched them though, so I never saw anything more than the cover.

Yeah. Back In The Day, I would loan a couple of my Batman comics to a buddy, and get back one of the Batman’s, two Richie Rich and some Archie comics. Not that there’s anything wrong with RR and Archie, but I really wanted both Batman comics back….

I’d still say Archie is sufficiently well-known to use as a reference. But my wife loves Archie comics, so I may be biased.

Poor Ethyl, never gets any respect. She is being drawn less angular in the newer comics.

I’m binging to catch up and Archie is exactly what I thought of on the last page!

Will this one be posted to your tumblr?

If you want it to I will, but I stopped posting to tumbler because it caused my pageviews to tank to the point I lost $600 dollars in revenue a month.

If this page is a riff off of the Archie comic book- then why isn’t Reggie…”the Reggie”? ;D

Wouldn’t John technically be the Veronica in the situation since he didn’t seem all too interested in Alex until after Reggie asked her out?

I remember a TV-movie on Archie and the gang, all getting together years later, and Ethel turned out to have gotten over her “awkward” years and had become a super-model!