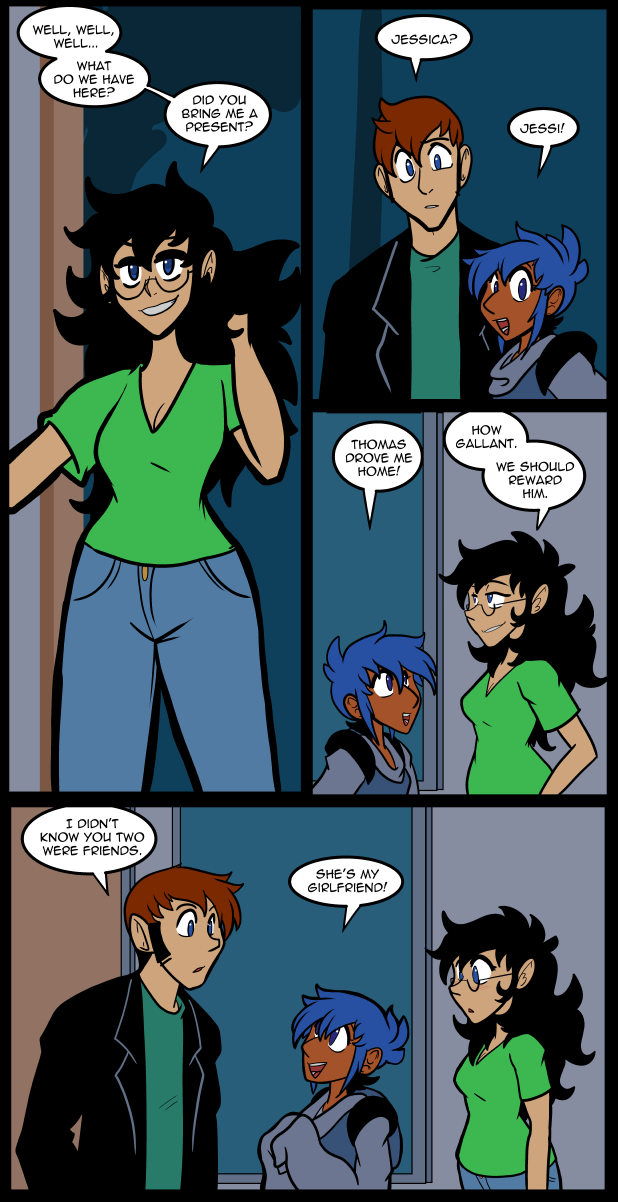 Thomas probably has some misgivings about this match…

I hope you all had safe and fun holidays. Mine had some ups and downs, but mostly it was good.
Several readers sent me animal crossing cards, but I still didn’t get Ankha in a pack. At any rate I’ll have a lot of cards to use for trades now, so hopefully I can complete the second and third sets just by trading. I really don’t like using tumblr for trading cards, but it’s the only place I ever get notes about it, so tumblr it is for now.

My grandma fell and hurt her knee and was obsessed with showing everyone how gross it looks. That was pretty much all I talked about with her. She wanted to show me so bad, but I don’t actually like seeing that sort of thing so I declined, which seemed to make her even more intent on showing me. XD It’s unfortunate, obviously, that she hurt herself again, but in some ways she seemed kind of cheery about the whole thing, at least with me. The Teen apparently was clashing with her when I wasn’t around, and she was fighting with the Teen’s brother at one point apparently. I dunno, fighting isn’t really abnormal for them so I wasn’t very concerned.
I didn’t get to hang around very long since I was riding with dad, but even then I would have had to leave pretty quick anyway since the heat in their house gets to me. It wasn’t as bad as Thanksgiving, but after today both my feet were swollen and unpleasant yo walk on. The night before I was just fine when I got home, but today the trip over was hot, it was hot there, and it was hot on the way back. Although I was less affected by it than I have been, so that’s something.

I got some lego Dimensions stuff so that will be fun to mess around with. I really liked Gremlins as a kid so I’m excited to see the free roaming levels. The ET level will probably be fun too, although I don’t remember the movie well enough to guess what will be in it… Whatever it is it will be better than the Atari version… I hope. XD

Jess has an odd look on her face in that last panel.

I took it to be that Jess wasn’t expecting Jo to use the G-word. How many people know about their relationship? Probably not Thomas.

I think it might be a reaction to being called ‘girlfriend’. Hee.

I think that too! Like a stunned, she actually said it look. Cause thus far she hasn’t. The only time she ever said anything before this was the soulmate thing and that was at a whisper. Here she is saying it all excited.

yeah. If you look closely, she’s got a teeny tiny blush.

I have been wanting Jo to tell Thomas about her and Jess for so long now! Merry Christmas to me!

I’m not sure Jess shares your ebullience. Commitment hasn’t really been her thing.

But Jo is special.

Besides, like the post up above said, if you zoom in real close Jess is blushing. Plus she didn’t exactly seem against it when Jo said Soulmate. She may be nervous for the reasons you state sure, but who isn’t when starting something new.

She’s just shocked Jo just came out with it like that. Especially after Jo seemed reluctant for everyone to know, and then here she is just shouting it out.

So ship it ship pair it and screaming and bop shubop

But the very best thing of all is nether one has balls. So it looks like joe just scored, see if she get a whole lot more. Ship it ship. Ship it romactic good fun from Wohlenhaus comics.

Are you having a stroke?

I’m referencing an old toy commercial. the toy was called skip it.

That is a deep pull. Now that you say it I remember the commercials though.

It never leaves your head. I haven’t seen that commercial in years and it’s still stuck in my head

It just seemed to fit the situation

The ? in the third panel should be a ! methinks

It’s funnier this way, i imagine her sounding confused, and jess just going with it.

please, you two, have the monogamy-or-not talk already.

here is hoping not exs

oh also. he has no leeway in misgivings.. when he himself is trying to use her for information gathering and admitted manipulation himself…

Thomas is worried about Nina, likely for much more than we’ve seen thus far. They’ve been friends for a long time and he’s had to see her go from cheerleader to accident victim to where she is now, and seen how that progression has affected her.

So, yes, he worries, and will try to do everything within his power to make things better for his friend. He asks Jo…also Nina’s friend…to get information. Not break into a secure facility and steal data, but simply to see if there’s any lingering animosity on her room-mate’s part.

And yes, in this comic…Jo is his friend, too, and he is well aware of Jess’ former `views’ on serious relationships. Yes, Jess can evolve, as I hope she has, but how is Thomas supposed to know that? Easy answer: information, same thing you’re against him getting for Nina’s sake.

These are two separate issues, both stemming from Thomas’ desire to protect his friends. Neither issue is a negative regarding Thomas’ character. Rather than shrug it all off and meander back to Carol, thinking it’s not his problem or concern, he’s showing he’s not completely selfish and self-absorbed.

Guys I’m just going to leave this here for those of you who forgot/don’t understand Thomas right now (note: I’m pretty certain that happened literally a few hours earlier): /comics1/1559-reactionary

Everybody underestimates Jo, even Jess.

Forgot to mention I had a blow out about 3 miles from home, and my spare was flat.

Carol would be Most Displeased to learn of this offer even so much as taking place. She claimed her territory. Simmer down, Jess. This is a beast you wish not to anger…

In fairness, Jess invited Carol along, although she doesn’t know it.

Carol just seems too territorial for such shenanigans?