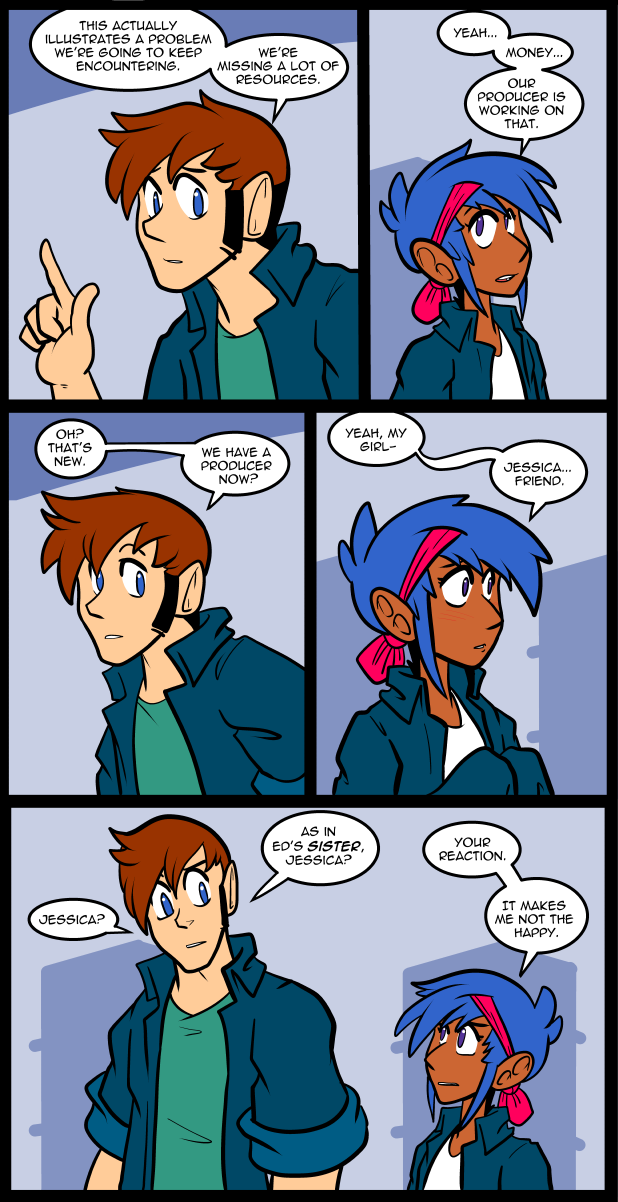 I don’t like being flirted with unless the person flirting is genuinely interested in me. People who flirt for the sake of flirting are irritating. The thing about Jess is that she flirts indiscriminately, but because she is genuinely attracted to a wide range of people, and is very keen. So I’ve always been of two minds about that aspect of her character. She is the type that can bounce from person to person without it causing her a lot of strife. I think her ideal world would be one where everyone could exist in a bunch of cuddle puddles where everyone is just chilled out and having a good time. That kind of personality is rare. She can be attracted and attached to a lot of people but not selfishly. Most people, myself included, are, on some level, possessive of other people. We establish a sort of ownership over them in our minds. Which is fine, unless you go to far with it. I’m not sure how to explain it. It’s kind of like how some people don’t think you can rape your spouse. If you want to have sex with your partner and they don’t they can tell you know. If you force yourself on them, then there you go. You’ve treated them like a possession rather than another human being with agency. Even if you enter into a relationship with someone you don’t also enter into joint possession of one another. You need to abide by whatever rules you agree on, but accept that, in the end, you can’t control the other party’s actions. That’s part of why relationships with more than two people tend to disintegrate over time. It’s hard enough to keep it together with two people. Adding more just complicates things. Of course that doesn’t mean it can’t be done, but it’s just that much harder for every other person you involve.
I’ve known a few people who entered into relationships with multiple people, and none of them were ever stable and healthy. Someone ends up as a third wheel and then the fires start. If you’re in a relationship like that, and it’s working, you deserve a gold star. You have abilities that go beyond those of most humans.

I didn’t think of it before (though someone else probably did and already pointed it out), but does the library have computers and printers? I feel like Alex would be willing to let Brooksie get some after hours time on them. Or at least, more willing than giving up her gaming computer.

The thing about such relationships is that all of the partners need to be on the same page which usually means that they must not allow their egos to take hold. This is, as you have said, rare.

Awww, poor Jo.. Look at that dot dot dot after she said Jess’ name. She really wanted to say Girlfriend. I know how that is, I very rarely am able to say most of what I want to.

I 100% agree with you on relationships. I have tried a poly lifestyle and it melted down spectacularly.

I tend to subconsciously flirt with everyone, but I’m kind of wired backwards. I only flirt in easily detectable ways with people I’m not interested in; I get way too shy and subtle when I’m actually interested.

I read somewhere (that I can’t remember where and can’t be bothered to look up now) that flirting, as a communication method, didn’t evolve as a way to indicate romantic interest, but rather as a way to establish trust between individuals. If that’s true, I think that explains why I flirt with everyone, because I’ve never been comfortable enough around humans to trust easily.

Grabs popcorn. This is gonna be good

Maybe Jo will finally get a lesson about jess and have her eyes open up dat girl is bad juju.

I sense that Thomas isn’t so much going to disapprove of Jo and Jess as much as he is just concerned for Jo’s feelings. I could see him giving Jess the ol’ scary-dad-you-be-good-to-my-daughter routine. He and Carol really are mama and papa bear types.

I think that sounds about right. : )

Not that I think he is a champion at being [a companion], or at being a spouse or boyfriend, but:

Gene Simmons, the guy from the band, Kiss, says-
[paraphrasing]- “I don’t want to ever call someone MY WIFE, or MY girlfriend, because…when I say “MY something”, it sounds like I’m treating someone like an object, and that they don’t have any say in matters. -unquote.

I think it’s a good idea to learn the concept that- when you’re a friend, a boyfriend/girlfriend, or a spouse to someone, that you spend time together, + share things, but you don’t “belong” to each other, or to someone. I think that’s a healthy idea.
That’s just my 2 cents on the matter.

But then, Gene Simmons is a self-proclaimed uber-narcissist. Since, in his world, everything is always all about only him, he may need to create that kind of semantic barrier in order for both of them to remain sane.

On the other hand, I would ask: “Then who’s wife/girlfriend IS she?” For many individuals who are more emotionally stable, the “my” refers to the relationship, not the person.

I expect my gold star in the mail any day now.
But why is it when poly relationships fail its because poly doesn’t work ? Most monogamous relationships fail hard, its a fact. Most relationships period do. I think its just that we all look for something to blame at the end of a relationship and a factor lile that is an easy target. For myself anyeau as much as it seems nice to have a person eerily devoted to me and me alone. i know that I’m capable of loving more than one person with equal and separate commitment and forcing myself to choose would only lead to resentment and heartbreak, so I believe ot must be so for some others. It’s not for everyone obviously, but I do believe that it’s for more people than realize it, potentially for more people than monogamy is, but to be fair my pool of acquaintances is rather a poor sample because we all choose whom we interact with

I think flirting is first and foremost a way of “testing the waters” in a playful, non-committal way. So when people start flirting, they often don’t *know* yet whether they are seriously interested — that’s why they are flirting.

Also, personally I think flirting is fun. When done right, it makes people feel better about themselves, without really giving them any wrong ideas :-)

If I remember correctly, wasn’t it Thomas who was just flirting for the sake of flirting though? Him and John were having a playful, be impressive thing which Thomas won, then Jess is like, cool, I’m game, you’re cute. Then Thomas was like, yeah, I wasn’t, ’cause you’re my friend’s sister.

I think he states at the end that the contest was the most important thing.

This is Thomas we’re talking about. The contest is (or now was?) the only thing that matters.

I’m the kind of guy that apparently wouldn’t recognize flirting if they threw rocks chiseled with the word on it at him. I have been made aware that my childhood crush was giving me every signal over the years, and I never took the bait because I didn’t know, but literally EVERYONE ELSE I KNEW knew. I wouldn’t feel so bad about it if [a] all these people who knew told me about it, and/or [b] said old crush just bloody said it! I clearly never said yay or nay about it, so I can’t imagine they thought I’d be disinterested, just unknowing. After a while, she seemed to get along with another of my old friends, and she and he decided it’d be smart to have a roll in the sheets of her new place with him (after we helped her move)… with me in the other room with the door open. That hurt. Hurt more to hear em enjoyin’ “discreetly” then hear her climax….

Now my old friend (the male), and chorus’d by everyone else I know says I’m more emotionally dead inside than I was before. They think I’m forlorn or love-sick or something… I think I’ve moved to just being bitter. Female friend and male friend broke up and female friend moved far away and got married to a guy 2x older than her. Male friend found another to love and is happy… in fact, all my friends have happy relationships now, my brother found himself a girl, my male friend is married, my gay friend I shared being alone with found himself a nice guy, my other handful of friends are in relationships, and here I am… everyone’s third wheel. [/tiny violin]

On the bright side of all this, I have a fun way of coping with the irritations of February and all the Valentine’s tripe they shove down our throats. I call it “David Rage Month” where I watch/play bad and annoying media (usually with the gay buddy and his mate in tow). Last year was Disney Sequels. This year was supposed to be ALL of the Land Before Time movies (I realized that I had no means of watching them all until I found some site called Kiss Cartoon). I think next year will be Final Fantasy 13, then after that the gay friend suggests My Little Pony (the 80’s version, though new or old will probably work for our purposes), after that might be as many Scooby Doo movies as we can find (that site has a lot of em), after that I’m not sure. I need more bad media.

Apologies for wall of text. If I could spoiler box it for ya’ll, I would. But it does feel good to type out irritations and confirm their existences.

Why don’t you go ahead and learn it? And confront your feelings on the way. Well worth a try and you’ve done the first step already.^^

Remember thinking at school, Gosh, I bet this girl gets annoyed how I always sit next to her in class. Then, wait….. I almost always get here first….. Still don’t know if I’d have had a snowball’s chance.

Welp, I don´t know how to flirt (for the life of me, i don´t know how to…). And yet, I am kinda viewed as the guy who likes to joke around, a bit-happy-go-lucky, mostly. Deep down I´m a romantic. But can´t help to be a bit corny at times :P

No ones talked about Jo’s head scarf? Its a neat touch.