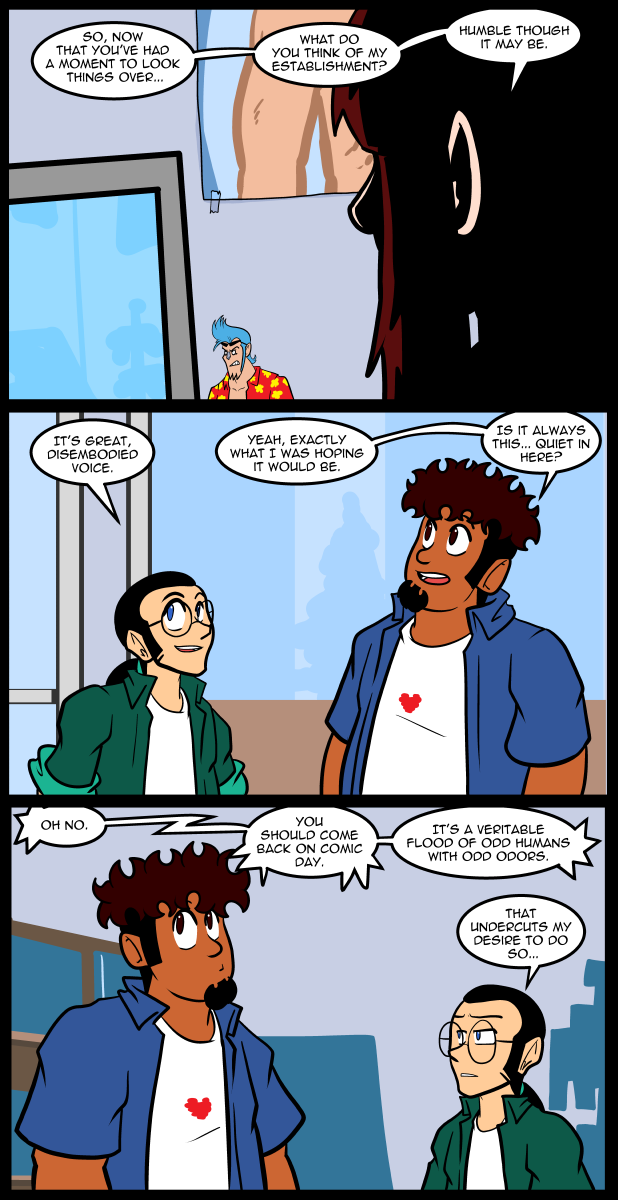 Ever since someone showed me how many characters from One Piece are based on real people I haven’t been able to unsee Franky as Jim Carrey. Of course he’s like a much better version of Jim Carrey, but still. I already knew that several characters were based on famous Japanese actors, and they are way more obvious than a lot of the others, but I was surprised that some of the main cast were too. Anyway, I only bring it up because Rulette has a Franky figure on her workspace. Anyway, look it up if you want to see who looks like who. It’s neat.

My grandpa has been in the hospital to have his knee replaced. It’s been a real trial for him, and the family in general. They got the thing replaced,( which I made the mistake of looking up video of) but he got a staph infection. So it’s kind of lame. Anyway, he’s in the hospital he used to work at now, so he’ll get special care because they all love him. My grandpa is very loveable.

This was the first week I had all the pages for this week done last week. I can’t even remember the last time I almost had a real buffer. It’s a nice feeling. I still have to get the anniversary poster done, and other stuff, but it’s progress.

So many possible occurances now. shiny.

I’m still hoping a new fried for manager boyo. and then they can have manager plots

Plans that come together. ……. Cunning Plans.

Hm, this doesn’t really work well. Usually, you could collect a plethora of information about a person from the voice alone, from the obvious things like sex and age to details like body size, temper, origin etc.

A comic replaces that with the visuals, so taking those away reveals the inability of a comic to deliver information through voice.

In this case it makes no fucking difference at all, since they’ve already figured out the proprietor is female from the name of the store… And are you saying you can tell physical attributes from someone’s voice, because there isn’t a fat voice, or black voice, or pretty voice. At best you might be able to guess where they’re from based on their accent, but that’s about it.

Actually, the prettiest female voice I know is both fat and black (and she uses both of those words to describe herself). On the phone, she always sounded like a shy southern belle with a touch of a British accent. Turns out she was born in Northern Ireland (go figure) but she grew up in Georgia when her Dad was transferred there. She’s the CSR you hope you get!

The voice can belie one’s size. Not to mention that there are plenty of men and women with semi-androgynous voices.

I took Music Appreciation with a 300 pound counter tenor and a 110 bass in college.

Which I guess is the reason the owner doesn’t greet the customers in person. Smart choice.

If only otaku could discover hygiene.

Gamers …. the tabletop-CCG-Roleplay crowd have for the most part discovered such only because they have to endure each others special ambiance.
Convention organizers tend to enforce such social norms very forcefully. The Gamer’s Soap on a rope and deodorant sticks in the swag bags [semi-serious gag items – much sought after due to branding] went away long before they major cons went to coupon books.

Huh I thought Roulette waa just a reference to them having an eclectic collection of mechanised and that they might not have what you want. ^_^” I didn’t remotely consider it a name for anyone at all. Heh. Ah well.

I was wondering about the spelling.

I figured it was a way to make it stick in people’s minds.

Denfinitly getting a Lynne thigpen from the warriors feel here

I know what you mean!

I hope that wasn’t meant to be a pun.

‘Cause I thought it was.

Because I’m that kind of sick.

So glad you finally succeeded to get some advance in your drawing of the comics.
Hopefully, you will be able to keep up with that so you’ll be more relaxed

lol, Onepiece! I’m pleasantly surprised. I’ve been following Onepiece since I saw it on Toonami Jetstream. I had to rewatch a bunch of episodes subbed though; I’m not a big fan of the dubbed anime.