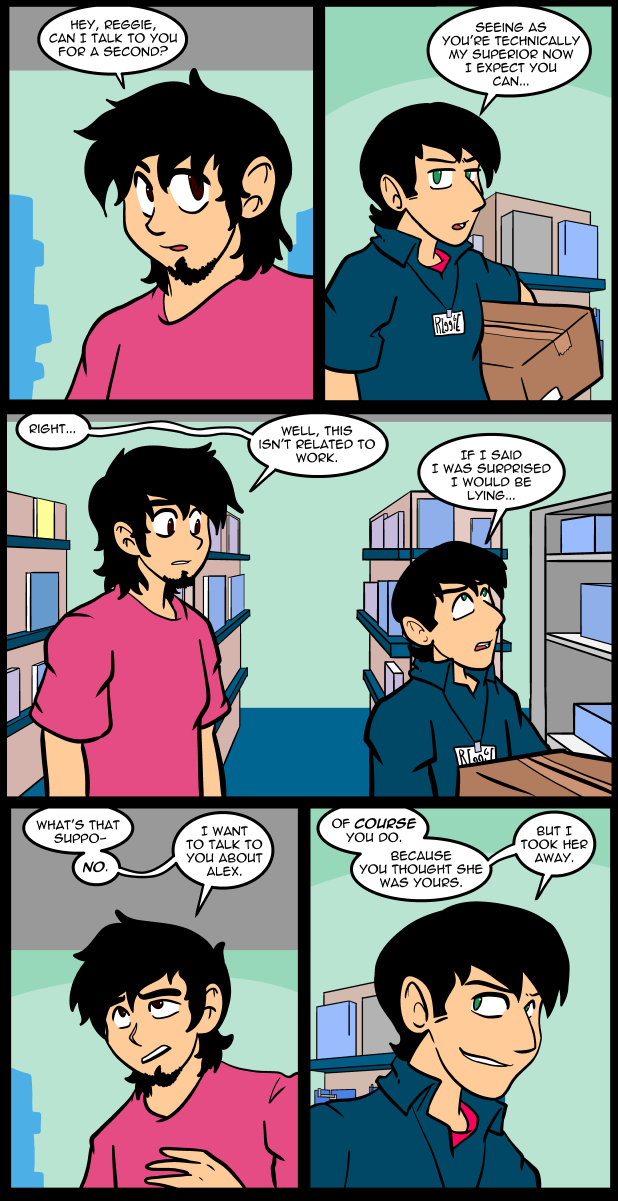 John, like many people, have trouble knowing to what level one should estimate Reggie. Of course, in fairness, his level of competence from one activity to another varies so wildly one could be forgiven. It’s fair to say that he has a devious sort of intellect that focuses on things people generally consider negative traits. He has a certain tactical wit that surprises people. John, unfortunately for him, is about to get a taste of it.

The other day I added a sketch someone requested of a redraw. Jolene tied up in ribbons and little else. I took a chance and said that if 20 people commented there I would go ahead and finish the sketch. I underestimated Jolene’s appeal… In any event, I will be doing a finished version of the piece after I catch up on last month’s sketch requests. Something to look forward to for us all.

My tax appointment was rescheduled for Monday because I still lacked some tax papers I was going to need. I wonder how long it’s going to take… The little town near where I live tends to have its businesses housed in little, shitty, buildings that they don’t keep cool. If this is the case with the tax people it’s going to be a long morning. Unless the process if super simple. I don’t know. I’ve never had an expert loot at my books before. Pamphlet might be a better word, now that I think about it.

One of my friends who still lives in Kansas got a weird charge on his taxes because Kansas, thanks in large part to Governor Brownback’s cringe worthy tax schemes, is broke. So the state is going after charges they usually don’t bother with. It was, like, 36 bucks, but it’s just funny that the state is so fucked that it needs every penny it can get from even the lowest income citizens. The Daily Show did a segment on Brownback’s fiscal experiment. I’m sure it’s online if you want to look it up. It’s portrayed as a glorious failure of republican financial fantasy. I have to say Kansas has really deteriorated since I moved away, but Colorado isn’t better by orders of magnitude. Between corruption, ignorance, and laziness it’s a wonder the country functions at all. It’s going to be an insane election. What’s going on now is just capering compared to the stuff that’s on the horizon. Stock up on canned goods, kids.

Hopefully this weekend I’ll manage to get caught up on everything and no member of my family will fuck it up by being injured, or an idiot. It’s a lot to hope for. I’m starting to think my gene pool should have had a lot more chlorine pour in it…

The Teen got second place at an art show of some sort. I don’t think I ever got any recognition at that level, but I can’t really remember. I’ve found that the awards I did win were worthless, so I don’t have much use for them. There are a few for comics, but even on my best day I’m not in the running for any. I lack whatever it is that makes someone award worthy. It’s not always storytelling, or artistic skill, because I’ve seen garbage win awards. Whatever it is though, I don’t have it. I think it might be the noticeable lack of Disney characters in my work. Judges love Disney. That much I know. Those fucking donadl duck comics get awards constantly. Where do people even buy them? The only comics I see anymore are trades in Walmart of Adventure time, and Archie digests.

I have been experiencing deja vu again. It’s been uncommon for a long while but the other day it kept happening, and has been happening in general. When I was younger I had that feeling all the time. For many years it was just a regular thing. Back then I was ignorantly spiritual. Like, it had to be super significant. Some kind of past life experience intruding on present times bullshit. Now it just strikes me as a slightly worrying chemical imbalance. In fact, I think it might have just been caused by allergies the whole time. They have been worse than anything in recent memory. To the point that the Teen thinks I’m crying in my room all the time. It’s dry and dusty and we’ve had two extra dogs in the house several times this week. Each breath is just a mixture of blood, dirt, and gasses at this point. Which, amusingly, was the original name of Earth, Wind, And Fire.

Reggie is a bit of an ass, but I adore him anyway, haha. xD

When it comes to taxes, I think it’s against the rules for them to come anywhere close to simple, quick, or convenient.

Give him an inch and he’ll take it a mile.

You don’t have to rub it in, because it wasn’t like you had to try to win her heart. Alex probably never had any real relationships beforehand, and any man with a grain of sincerity can woo a lady with but a mere compliment. Of course there is the matter of motivation and acquaintanceship, but John lacked the former in his pursuit of the fur-suit.

Yes, I went there. What are you going to do about it? Sue me?

Nope. I’m not gonna switch from fur-suits to law-suits, for anyone! Hee hee hee.

At least you didn’t call him Shirley. XD

Heh, heh! A mean and nasty dude could take the phrase, “sue me”, and then use it to start calling a guy: Sue. :D

Oh God, asshole Reggie is back

people are acting so suprised his asshole side is showing, you expected anything less from Reggie?

Yes, I expect him to grow the hell up at some point.

Yeah, Kansas is not doing great. I’d stop watching the news about it on account of it being depressing, but I feel I should stay informed in case Brownback comes up with something ludicrous I should stay off the streets for.

I wouldn’t go out and buy up a store of canned goods. Maybe buy an off-road vehicle due to the roads …

I was just in Colorado. I live in Nebraska, so it’s like a seven hour drive to Denver. I also travel a lot for business. I’m not sure on what magnitude life there is any worse than anywhere else. Although I do agree with Kansas – soon, with no money for education, they are going to have all sorts of kids with spare time on their hands to go out and cause massive trouble. On top of ALL the other problems they have.

Can’t like Reggie for a few pages without a fresh page that makes you want to punch him in the face.

The only thing good about Colorado is the mountains.

Those fuckers will suspend your drivers license – and not tell you. If you get pulled over, you get arrested for driving on a suspended license and it’s your tough luck. They suspended my license on a 5 year old ticket that I had already paid. I had to pay the reinstatement fee ($25) even after proving that the license should never have been suspended in the first place.

It’s funny you mention Earth, Wind & Fire, because I saw them in concert this week with Chicago.

John I hope your hungry cause Reggie is about to open a can of whoopass on you.

It’s funny how even if you don’t look at love as a competition, someone who does can still make you feel like you lost. I have no doubt John is about to get burnt, but I have a weird feeling this exchange might bite Reggie in the ass, too.

Just waiting for Reggie to hawk up another gob of snark.

I’ve been using one piece or another of tax preparation software for years. So far, I haven’t been called in for an audit, yet.

Connecticut is a mess, too. Our Governor is a functional illiterate, has no clue what’s going on in the real world, and spends money like it grows on trees. When the bills come due, he blames everything on the bad old Republicans (a serious minority in our Legislature).

On the one hand he’s being a snarky snarkman…but on the other hand he is toooooooooooooootally right. You had your chance dude, but unlike in television where people will wait until the final season for you to ask them out, THIS IS BETWEEN FAILURES BABY!

I do, and I think you’ll find that title is accurate to both aspects.

I was wondering about that myself, and figuring that it fit too well to be a coincidence. If I may derail from this comic, what do you think of Homestuck ending?

I’m sad to see it end, but I’m glad it has an ending I get to see. I’ve got no idea how potentially devastating it would be if the ending sucks.

I’m with you, but unfortunately due to me forgetting about it for an odd year or two I’m hopelessly behind and have no chance of catching up in time for the ending.

Uh oh This may not end well