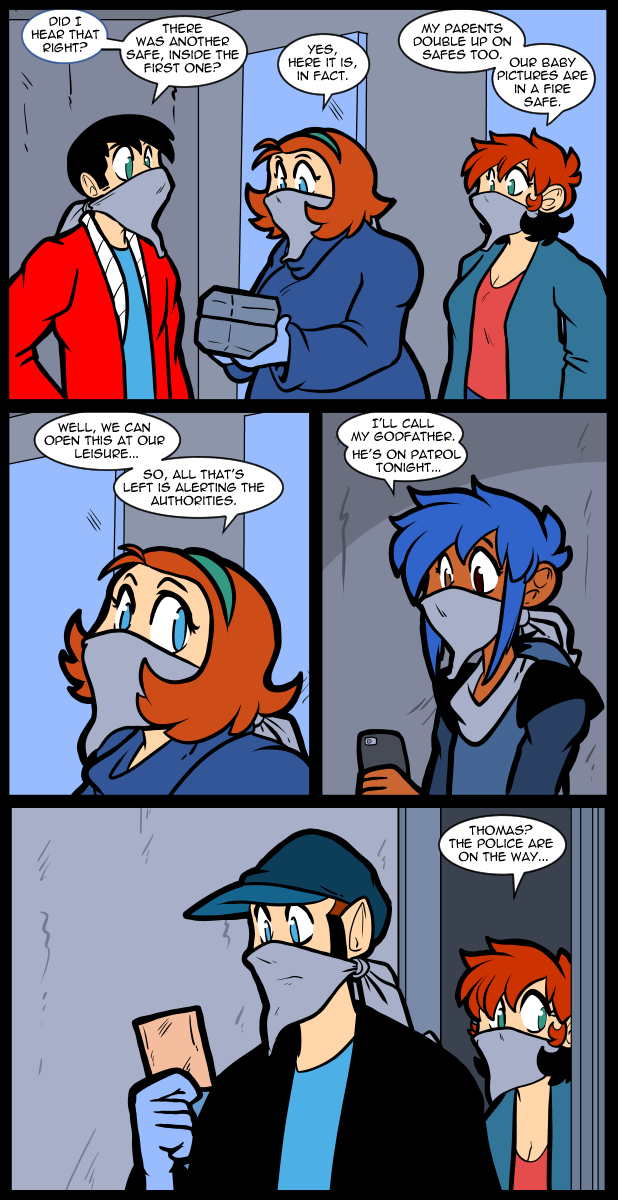 I couldn’t decide for a while what direction I wanted to go with this next part, but I finally landed on something less complex than I was considering. What it comes down to is how we react to death depending on our opinion of the person who died. If we view them as an enemy, or corrupt in some way, we act as though their death doesn’t matter, or even that we’re glad they’re dead. Which is perfectly reasonable. But if we like the person we take it very personally. If we don’t know the person then we almost always assume that they were good & react appropriately until something shows that they were awful. Even in death context matters.
Anyway, I was thinking about having Thomas find a Klan manual in the safe along with the other stuff. Because I know that it would instantly shift the audience to the side of the cast. That’s something I actually had happen once as well. Of course having a Klan manual doesn’t make you a clansman any more than having a bible makes you Christian, but the assumption at first is always that you wouldn’t have it unless you were interested in it. which doesn’t take research in to account.
Thomas Jefferson famously owned a Koran, but he wasn’t an Islamist. He was trying to find passages to help him argue with Muslim pirates. Anyway, all that is as may be. I chose against it because it would basically turn this blog post in to weeks of debating the revelation in the comic, & I didn’t want to do that. I’m more than ready to move on to the next thing, but I’m stuck tying up the loose ends.

Tangent: January 8th, over three months ago, is when Reggie first mentions masks.

I have now normalized walking into what few stores are still open with 80% of my face covered like a bank robber’s.

How prescient is this comic?

I actually warned my mother about making sure all the prescriptions were filled in January when the very first mentions of a weird respiratory sickness was getting reported on the part of the internet no one takes seriously.

Thomas has just found a shiny Charizard in mint condition and knows he’s not a good enough man to ever let the others know.

Catching them all is finally within his grasp…

Even though it isn’t so, I can’t help but look at the last panel like Thomas is about to leave a thief’s calling card. :P

First, I don’t know if the young set have seen Cary Grant in To Catch a Thief, but he’d like the idea.

Second, what would he nickname himself?

Maybe he could leave a calling card that says:
“You have been visited by “Professor Plum”. The PURPLE one!”
:D

That’s an interesting and well thought perspective about the various books. Worth considering also, is where and how they are kept. That can be even more of an indicator of the reader. If they’re on a bookshelf with other books, they’re reference. Bible/Koran at a bedside is more likely serious devotion. A Klan manual in a safe: yeah, you’re in, but you don’t want anyone to /know/ you’re in. Same but in the bathroom, you’re out, and don’t care who knows you’re out… of TP.

A Klan manual?
I didn’t know that some of them could read.

Oh wait maybe it is a popup book. Those were always popular.

Also, they were called Klanuals.

And their seafood picnics are called Klambakes.
:D

True story: a buddy of mine got a boatload of military history collectibles off a dead guy, in exchange for hauling them away. Evidently his wife didn’t care for him very much. As we were sorting through all of the stuff… we found some Klan robes with his name inked in the collar. (This was in Massachusetts.)

If you ever wondered how the pointy hats work, they wear a cardboard conehead-like thing, then put the hat fabric over it.

Oh the questions you could ask that mummified carcass….

Old printer friend of mine says that in the 1930s, some American publishers were sued for copyright infringement for reprinting translations of Mein Kampf without paying royalties. They were guilty as hell, and their goal was to alert the U.S. public that Hitler was crazy and evil, not to promote his views.

I am natively a ridgerunner from Northern Greater Appalachia. My brother is a longtime Harley rider. He’s run into guys from further south who have tried to talk up the Klan to him.

In the 1920s, the Klan burned a cross on our great-grandfather’s lawn, because he was an Irish Catholic Democrat union freight train engineer and owned a big house on he hill.

Brother told those guys, fuck you very much.

Your comment about how details make you actively dislike someone you never met, really resonates with me:

My grand-father died last november. Until his death, I really didn’t think about the guy: I’d never met him, and my late mom (his daughter) never spoke of him.

So when I was informed of his death, I felt only indifference. Then it dawned on me: the only thing I knew about him was that my mom, who always could see the good in anyone, never, EVER spoke of him. It was enough for me to judge him pretty harshly.

Then, I had to accompany the other remaining members of the family to help and empty his rental house. No family picture of any sort, anywhere. None of his three kids, even less of his grand-kids. Nothing. I was told his late second wife was probably behind that, but still. I thought it was clear he really didn’t care about his offsrings. At the time, my mom’s death was really fresh (she died about a month before him, talk about a coincidence) so, it really hurt. I thought I couldn’t care less about him.

Then, while emptying a cupboard next to his bed, we found a series of religious pictures, with, on the back, the name of each of his kids. I was explained that these pictures were given at a fairly important event for christians, the confirmation. They were in a perfect condition, and they were right next to his bed.

I bawled my eyes out. Because even if I didn’t know the guy, and I had very little sympathy for him, he had died alone, with religious pictures with the names of his kids right next to him. Probably the only thing reminding of them he still had.

Thomas has just found the “Lotus X” formula, that’s in the film- One of Our Dinosaurs is Missing. :D

I think I would make a terrible comic writer. When I see comments from people clearly on the wrong side of things I just label them as idiots, lost things, who cannot use their senses. That’s my flaw. I feel compassion, in my low points I feel frustration, but mostly I rage against the fact there is nothing I can do to end their ignorance.

Ah there is a difference.
Ignorance is just a lack of information and is treatable with education.
Stupid has no cure, only controls like Reality TV, NASCAR and Bingo.