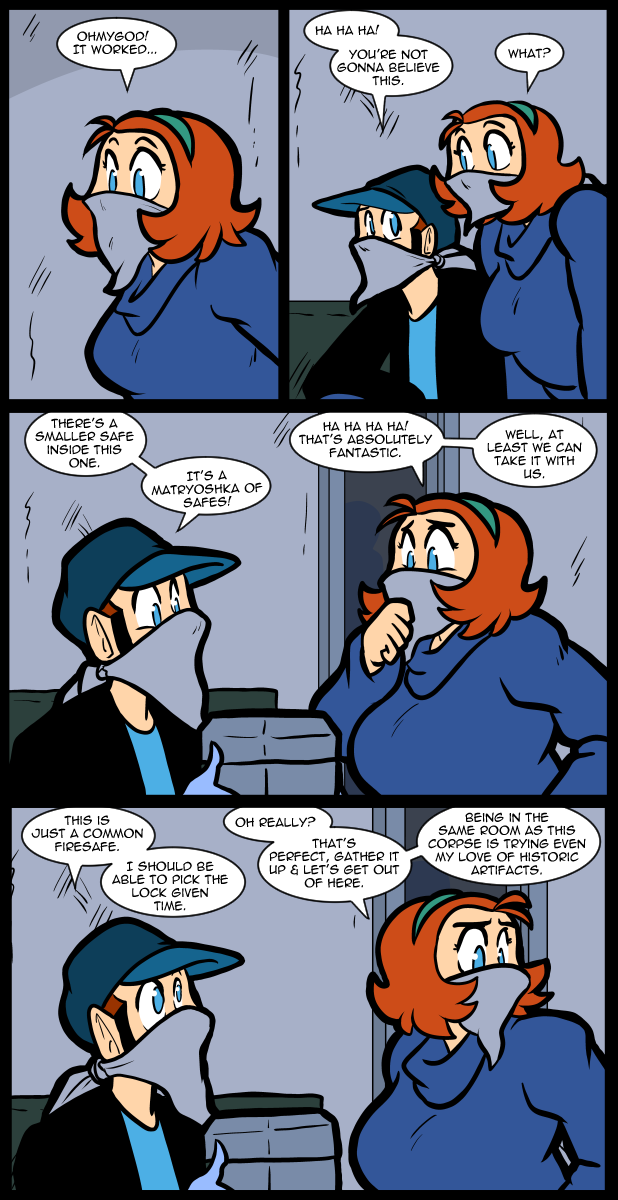 Matryoshka, are commonly called nesting dolls in America. I don’t know what the literal translation of the word is. With my basic grasp of languages I can guess that it comes from matriarch or has a common root to it. I like the sound of it better than nesting doll, so I use it on the rare occasions it comes up. Which leads to me needing to explain what it is about half the time. There’s certainly value in being understood by way of using common language, but it gets so boring after a while. Uncommon words spice things up. If memory serves Animal Crossing actually calls nesting dolls matryoshka. Which means that a little chuck of gamers know what it means at least. They are my people. I’m not sure if it has been called that in every iteration of the game though. I’m not even sure when they first appear. I found a set on my first day of New Horizons.
Anyway, on the subject of safes, it’s interesting to research how easy, or difficult, it is to get in to them. If youtube is any indication a dedicated person can get in to damn near anything in a remarkably short time, provided they have some tools and knowledge. I studied locksmithing for a while because I thought that might be a job I could tolerate. It’s basically thievery repurposed into a legitimate business. Depending on how you look at it at any rate. Most of the time it’s faster and more cost effective to just break a lock if it’s not part of the structure. The real value of a safe seems to be, in many cases, that in order to break in you run the risk of losing the valuables. Designing locks is one of those things where you have to balance the desire for safety and the knowledge that the end user may need to break in to their own thing at some point, because humans are forgetful. I know that I’ve broken into my own things way more often that someone else has. You lose a key, forget where you put the password. So then it’s either picking the lock, or breaking it off. Easy internet access has made that easier than ever before.

Ages ago this actually happened to a guy I worked for. We managed to get the safe open & there was a smaller safe inside of the first one. It was considerably newer than the outer safe. In the end the stuff inside was just some papers and things that were valueless to people other than the original owners. No stacks of cash, or jewels, like you would hope. I guess one mans treasure can be another mans trash too.

I remember an American editorial cartoonist being written about in Columbia Journalism Review because someone translated his Russian into the English equivalent, and it was “What the fuck?”

It was much easier to put this over on folks a third of a century ago, before the internet.

Swearing in any language isn’t uncommon for my work & I used this specifically because its widely known on the internet.

I gotta step up my NSFC (Not Safe For Church–not like I go to church) game because I had to look it up!

The title translates as “fucking bitch”.

I should know as I come from a Ukrainian background.

Did a quick google, Matryoshka translates literally as “little matron” and for those not inclined I did a follow-up google, a matron usually refers to a middle-aged married woman who is often a mother. The nesting nature of the dolls probably refers to the fact that a mother carries her child in her, and continuing on through generations.

We French people just call Matryoshka litterally “Russian Dolls” (poupée russe). I kinda wish we had a word like nesting doll because it convey more the fonction of the objet.

Growing up in the communist camp (not technically russian-speaking, though i do understand some), i didn’t even know those things were called “nesting dolls” in English – so there! :D

You know… those fire safes are remarkably easy to get into. Any of them with the clam shell design you can drop them from a decent height on the corner and typically the hinges will shatter. For picking locks, I’ll just reefer to the Lock Picking Lawyer’s youtube channel. That guy is kind of scary.

I know what you mean.

Homer Simpson: “Hey, how did you get into my kitchen? Wasn’t my door locked?”

Guy Homer paid $50 for stolen cable TV hookup: “Not in any serious fashion.”

Oh cool, I’m already subbed to LegalEagle on Youtube. I might have to check this other channel out now. Thanks!

And there are of course the theoretical Class B Stellar Structure objects known as the https://en.wikipedia.org/wiki/Matrioshka_brain Which means many SciFi fans will also recognise it.

Don’t forget to close and lock the other safe, just so you can give the sad bastard who actually owns the place false hope! :D

“I guess one mans treasure can be another mans trash too.”
I have begun watching a storage hoarder show from Britain. As it turns out, it is quite common for people to value trash as treasure. The common theme of the show is how many people, often pay thousands of $$$ per year for sometimes over a decade, to store things which more often than not, don’t tally up to a single years storage fee.

Generally the firebox safe is to keep your important papers from burning up in a fire. So it really doesn’t “protect” your valuables… that’s what the Safe is for. It’s to make sure you still have them after a disaster.

Sadly such denseness are the least effective against those wishing to take what is not theirs. Had to deal with break-ins in years gone by.

I have found the emergency cash in a zip-lock frozen in the centre of a margarine tub of frozen chili or some other oft avoided foodstuff, in the bottom of the freezer with a really old date on it gets left alone.
The other is the pile of fire bricks and gypsum board hiding an industrial NEMA4 case (water tight) stored under the basement stairs also tends to be ignored by one and all. Place some cans of assorted rusted and bent fasteners on top and nobody will look twice at the pile.

After I wondered at how someone managed to bust the padlocked gate at stockyards to steal a calf my father dropped some wisdom on my teen aged self: “Locks keep honest men honest”.
It is probably safe to say that most home safes are used as fire protection for documents and the odd bit of family jewelry.
As for theft, it is really hard to stop a motivated thief. I subscribe to the idea that you can’t make it impossible but you can make it inconvenient enough that they move on to the next, easier target.

Yeah, no lock is intended to keep people out with 100% success. It’s like your front door. The lock on it keeps people out because it’s not worth the time/noise to get in. If neither of those things are a concern, then someone will get in sooner or later.

Honestly, I’m not sure you even needed to give us the rundown on matroyshka. For me, it was definitely a moment of “Ah, that’s the russian name for them. Cool!” using strictly context and my own outer knowledge. Similar to JustRed, I’ve grown up knowing them as russian dolls (west canada).

There’s a type of cashbox-safe that has just a simple one key lock, and one time I was helping volunteer with a convention group that was selling some merch out of town. We got to the venue and started unpacking. When we got to the cashbox, we noticed there wasn’t any key. The director still had it, and had forgotten to pack it.
Learned there and then how insecure those cashboxes are when I managed to pop it open with just a bobby pin.

Wow, I thought that was just a decades-old movie trope and not related to the real world.

Did you ever get locked into a jail in the Old West?

5 imaginary dollars says- there’s a small safe inside this one. :)

…After all, this is the best way to keep a safe safe.

A Russian here; matryoshka (no capitalization in the original) is directly derived from a Russian female name Matryona, which was very common in rural areas around 1900 when theses dolls were invented. As such, it cannot be meaningfully translated.