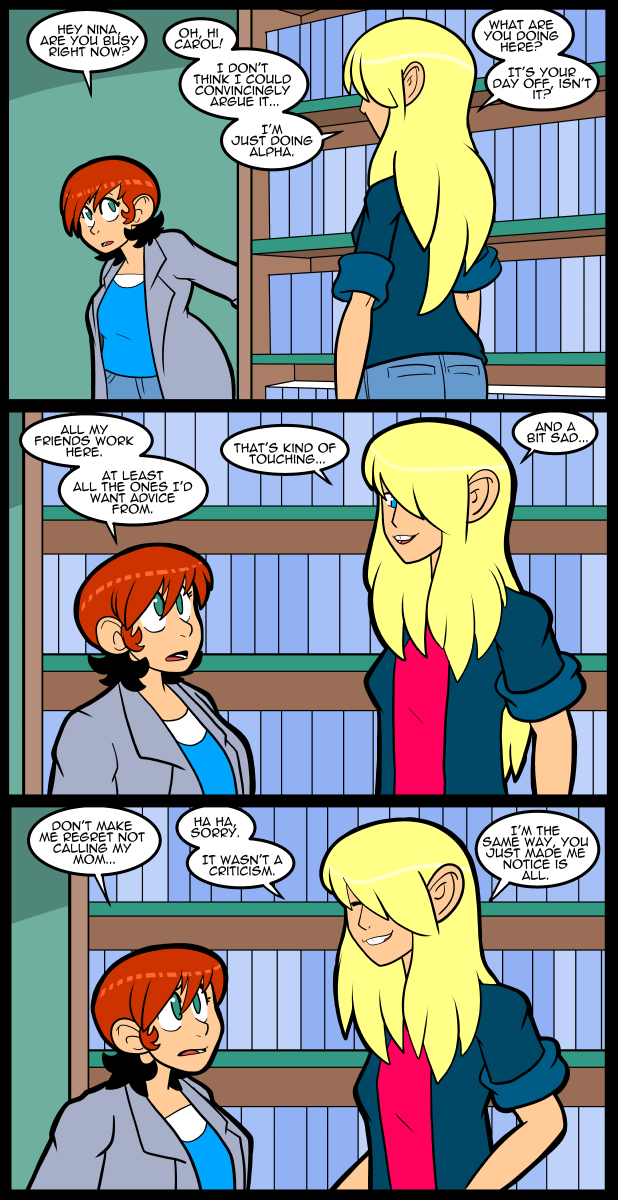 The art program I use has these digital guides you can use to help draw furniture and stuff. I’ve been trying to figure out how to use it, but it’s only stuff you’d see in a Japanese high school comic. There isn’t a bookshelf. Not that it would matter if there was since I can’t figure it all out. I guess it makes sense that all the assets are for Japanese schools since a million percent of manga take place in or around them. They have a distinct look compared to American schools. American schools look old and broken. There’s a general filthiness to them. Japanese schools, even in actual photographs look clean even if they seem dated. I think it must come from Japanese students having to take care of the classrooms themselves. Also American schools look like prisons. I think americans could take a few lessons from the Japanese as far as making kids responsible for their schools in a way that actually would make them feel like they mattered.

Well now I’m couroius. What does Carol need advice for? Generally she has a strong opinion on everything.

It would be so awesome if it was the second :3

I believe it’s the eating for two that leads to a need for relationship advice, that he’s on about…

exactly… when it is unplanned then it is very much an oh sh#$ moment….

“Well now I’m curious. What does Carol need advice for?”

You know those tubs ofJello Chocolate pudding? I can never open them without wrecking them! :D

I think about requiring American Schoolkids to help clean their own classrooms, and then I realize what an uproar that would cause.

From the PARENTS, not the kids.

… And before anybody says so, I KNOW the kids would raise a stink… Just not, in my estimation, anything like what you’d hear from the Parents. Not to even mention the Janitor/Custodian’s Union.

Oh god the Unions. Both Teachers and custodial.

Because of them a bunch of schools lost out on donated – as in free, including installation – AC units for classrooms.

Also volunteer work being blocked – litter cleanup – classroom maintenance and repair – the list goes on and on.

You should look at architectural drawings of objects, for figuring out how to draw them. They are measured proportionally, and are composed of the individual pieces. Sometimes patent information for particular designs includes schematics you can make slight proportion alterations to essentially be drawing “generic object: chair,” or whatever else you might find useful.

What does ‘alpha’ mean in this context?

Alphabetizing. She’s sorting the books by author, either because whatever swine walked through her department stuffed them back in the wrong place or because restocking has left the plan less than perfect.

When I worked in a library, we called it shelf reading.

Is this the long blue box aisle? Adding some vertical lines and occasional height variance of the books (not to mention some different colors) might help the appearance of the bookshelf.

I’m not saying draw each book, just treat it like a crowd shot. Splatters of color, vague hints at individual people.

I intended to split the books, I just forgot.

Huh. I thought those were empty shelves. Whatever. *shrugs*

That looks a lot better!

Maybe it is the Hardy Boys section?

The library itself had a club that actually took care of the library. Kids joined a club that would station at least one or two students in the library every period to work at the desk, put books back on the shelves, clean the library and walk through to identify what needed replacing. The interesting thing was that if a bookshelf was busted or falling apart, they went to their wood working or metal working club and that group happily built a replacement.

They also sponsored a monthly review of book suggestions to add/remove texts from the library (due to space constraints), as well as book sales and fundraisers for the library. The club had 20-something members in it, and they were really active. I loved that school’s library, because it was clean and quiet and everyone studied there.

That is a very encouraging experience! I think that would go a long way toward helping kids learn practical housekeeping skills that would also translate to most job environments too. Thanks for sharing! :)

I believe that is why Japan does it. It teaches them not only respect for their owned space, but it teaches them value in maintaining knowledge and the housekeeping part.

And teamwork. I remember asking one of my fellow students why everyone was required to be in a club, and his answer was, “Because we learn how to work as a team to do something we love.”

I would just like to point out that the man that designed the high school I went to had only previously designed Prisons, this was a conscious decision though. Apparently they did this in an attempt to “decrease rebellious thoughts and behavior.” (I don’t think it worked at all.) The place was designed and built in like the early 70’s so I always thought it just had an odd look because “the 70’s were weird.”

My high-school was built in the late sixties and was one of 6 or 7 built around that time.
No two were exactly the same yet each was built from the same modules – 3 story block with labs on second and third floors. Athletics block, gender segregated, that may or may not include a pool facility. Auditorium/lunch room with convertible table/benches. Lecture theaters that had folding walls into the back of the auditorium for expansion seating. Tech wing with several shop facilities [number of rooms varied], Admin/Library/main entrance block – all tied together with oddly angled hallways.

I went to schools on Canadian Air Force Bases, which were all built in the 1950s and used the same blueprints. I went to school on four different bases, scattered across the country, they were all absolutely identical. It wasn’t until I went to civilian schools off base that I learned that wasn’t normal. By the way, the military housing was identical as well, basically four or five different patterns repeated on each base. I lived in three houses that were the same duplex pattern, just on different sides, so I was constantly turning the wrong way to go into a room, then just as I was getting used to it, we moved and changed sides again.

Is it just me or Carol looks weird?

My god I love that gorgeous mop of blonde hair.

For some reason, I think girls with large enough bangs that partially cover their face look hot! It gives off a forbidden fruit element to their countenance that make one wonder with delight!