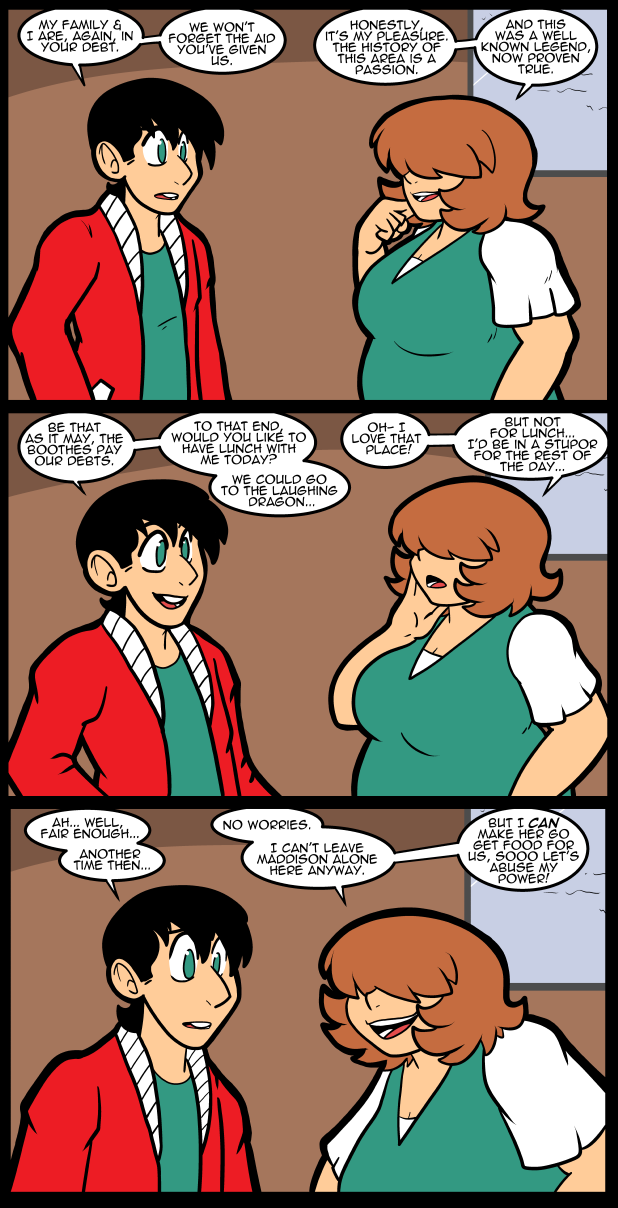 Alex really does have an abnormal amount of power in all aspects of her life if you think about it. She basically has the run of a library that she, essentially, owns. She’s paid mostly by a trust set up by her great… great… (I’m not sure how many greats) grandfather, and pretty much makes her own rules. I’m sure that accounts for a lot of why she’s generally happy all the time. It’s often said that you can’t buy happiness, but it has remarkable abilities when it comes to removing worry from your life. Which is an approximation of happiness at the very least.

Of course Reggie’s family has money, but they don’t allow him to do with it what he will, not that having access to said money would make Reggie happy deep down. Superficially he might be happy, but since he lacks the wisdom to make it stick long term simply by having wealth. That emotional maturity is what a lot of rich, successful people lack, which I why they stay miserable in spite of success. It’s not one specific thing that can give you that wisdom. Everyone has to work it out for themselves, and some never will.

Honestly, I’m not an expert when it comes to happiness, because I certainly don’t have the secret of it. I can see it in others, but I’m not sure what specific things I need to do to get there myself. Of course it might all just boil down to brain chemistry and everything I’ve posed at the beginning is just smart sounding bullshit. In fact, I think there’s a pretty good chance that’s the truth of a lot of what I say.

In any event Reggie has a shaky sense of self worth. On the one hand he believes he’s great, but somewhere inside he doesn’t believe it, so he has to try and force other people to repeat his hope back at him. Of course he’s gotten better over time, but he’s not quite there. He’s harsh, blunt, and mean spirited, but he also has standards, and wants to do good as he understands good to be.

Most of the cast is like this to one degree or another. They have flaws, but want to do good in the world.

I think science has shown money does not make people happier but lack of money severely impacts your ability to be happy. So stable finances are an important first step to pursue joy

The science people say money makes you more happy up to maybe 40k/year (I don’t remember the exact number), then levels off. Eventually you hit a point where the additional money actually decreases happiness.

But I seem to remember some weird complexity to the findings.

They say money can’t buy happyness. However you can have a blast renting it.

The Science number for maximum Happiness/Problems ratio is $70K.

Back when he was making his TV series, Hulk Hogan said something about how after $3 million, making more money was superfluous, just a way of “keeping score.”

It’s been said: Money can’t buy happiness, but it’s more comfortable to cry in a 3 bedroom house with fast internet than it is in a cardboard box, which is good enough for me

Also, lack of money, or at least a living wage, will definitely buy unhappiness. Hard to be happy when you don’t know if you’ll be able to both pay rent and eat next month, or afford your medications that you need to either live or function as normal human being.

I’ve been on both sides of the equation, going from making about 25 an hour to living on unemployment and minimum wage when I got laid off during the recession. I was a lot happier when I knew both my kids and I had the essentials and a little something in the bank to fall back on. Peace of mind goes a long way to happiness.

I’m doing better now, working my way back to where I was, but it wasn’t easier, and I’m still struggling, but I’m mostly keeping my head above water without too much trouble. Plus, I now have insurance so can afford my anxiety and anti-depressant meds, which is a huge plus.

For the record, when I was younger, I did what I was supposed to do: Went to school, went to college, paid off my student loans. None of that is a guarantee of success, or of lasting success.

Our substantial social safety net in Denmark has often been cited as one of the main reasons we’re topping the world “happiness” charts. Nobody fears sudden medical expenses, because it’s a single-payer system. And free education at any level, which includes a basic scholarship to cover expenses, means that student loan worries are also very limited. High taxes finance this, but the big rates apply only to amounts well over a comfortable middle class living. I pay mine happily, because I consider it an investment in the future prosperity of our country.

Good! Your hunger has made you powerful. Now, fulfill your destiny and take your place at my side.

That’s from the Star Wars films, I guess?

Chinese food always makes me… lethargic? I’m not sure what word to use to describe it. All the oil and carbs make me kind of sluggish, so I expect it would be similar for Alex since we’re of similar build. Of course everyone is different, and I admit I’ve only got myself as a point of reference on this.

Ah, I get a bit sluggish too with chinese food, but it depends on the quality I guess? if its just fast takeout like chinese, its usually minimal, but when its a full course meal I kinda need a nap after, I’m going to guess this place is like the latter. I don’t think its just you.

That’s what I’ve found: most Chinese places, in the USA, tend to be big into the sugars, + fattening stuff, + soft drinks, + colas, like the foods from [fast food places]. I still like the Chinese places, though.

Italian food works exactly the same way for me. All the pasta with greasy sauces and stuff… Pizza and macaroni are basically carbs too, so that makes me sleepy in an instant (and that’s also why I don’t eat larger portions of them though)

Some Chinese places have a penchant for stuffing the food with MSG. That… doesn’t sit well with some people. I tend to avoid it. Over here in yurp that means avoiding foods with E621 and the other E62x additives in them. Next time you’re at a Chinese place you could try and ask them if they’ll do you a dish without ve-tsin, see if that helps.

Though if you stuff your belly full it suddenly needs lots of energy and blood to deal with all the food, so you get a tad sluggish. That’s pretty much normal.

” It’s often said that you can’t buy happiness, but it has remarkable abilities when it comes to removing worry from your life. Which is an approximation of happiness at the very least. ”

“Money can’t buy happiness, but it can sure as heck rent it” seems applicable.

Did Alex get a slight redesign? Hey face and hair seem less…round. I’m digging it, whatever it is!

It’s just style drift. As far as I can tell it’s the same way I always draw her.

I have always thought that “money can’t buy happiness” was just a platitude thrown out by the rich to placate the poor in hopes that we will not rise up and demand justice.
~ulrich

Having spent some time myself pretty poor, I can tell you it’s a remarkable source of maturity. Maybe this is part of why the Boothes keep their children in such circumstances, such that when they do get access to the family wealth, they work to keep it intact and try to grow it–or at least not blow it immediately–for future generations.

My family works in a similar way, my father inherited his half of what was left of the “family fortune” when he was in his mid 50s, and tried to not only preserve it, but build on it so he could pass a sizable amount down to the next generation. And our family is relatively long lived; so as he told me, by the time I inherited my share, I should be old enough that I am in a position financially that don’t need it anymore, and can therefore continue the family legacy. Accordingly, I have told my kids the same thing; don’t expect any financial windfalls until you are old enough that you won’t be tempted to spend it right away.

I’ll agree to that.

“Money can’t buy happiness.” Have you tried? And it will buy chocolate, which is at least a facsimile. If applied correctly, a cheeseburger can make you happy. It really isn’t happiness that’s so hard to find- it’s LASTING happiness. I think constant happiness is contrary to the human condition. Would you see any reason to strive for anything if you were constantly happy? Where’s the story after that?

Happiness usually comes from exceeding expectations. The higher the expectations, the less likelihood for success, therefore an increased risk of disappointment.

Nature vs. nurture – the great question
I think by nature that Reggie is a caring individual but by nurture he’s been raised to see himself as an elite snob. I think that Alex is a good match for him because she doesn’t care about money and he’s met somebody who can look past money.

I’m disappointed by the lack of Lannister references in the comments.