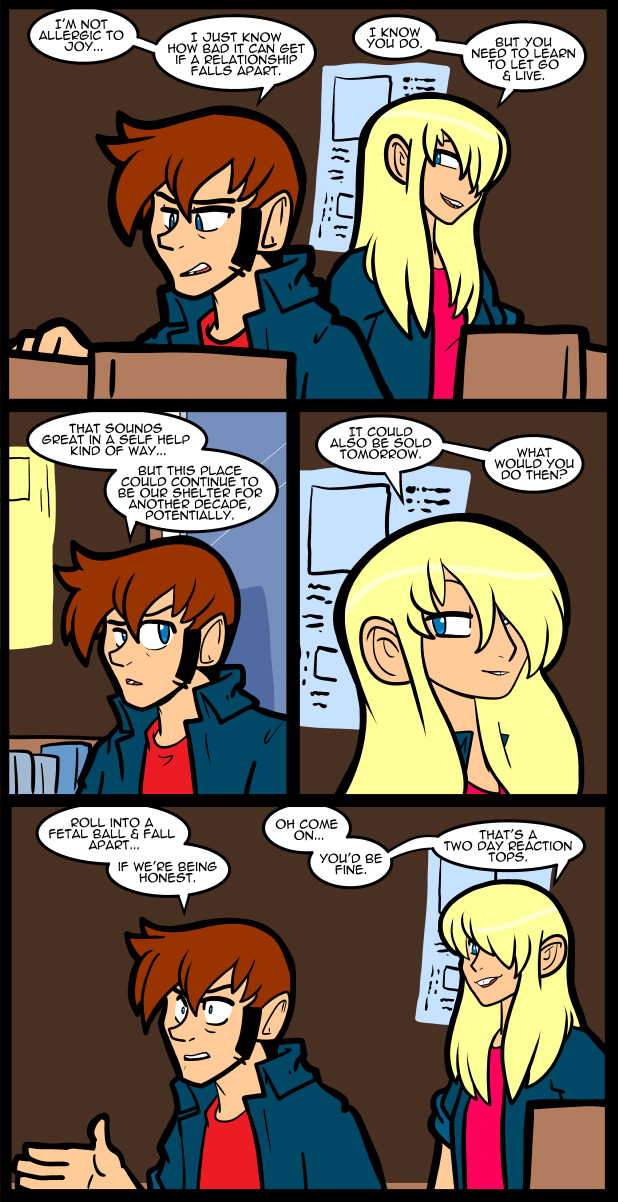 Tomorrow morning I have an eye exam. It’s been far too long since I’ve had one which is dumb because macular degeneration runs in my family, but life gets in the way of even things that ensure you keep having life sometimes.

We had some electricians out to the house today & the power to my bedroom is finally fixed. I also fixed my broken bed since I haven’t had anyone around to help me with that. I actually thought the frame was broken, but when we got it taken apart it turns out that it has just shifted and one part had fallen away. It was easy to fix with another pair of hands to help. I have to sleep on the floor a little bit and then on a bed a little bit because doing either exclusively leaves me in a lot of pain the next day. It has to be about 4 hours for each. The order doesn’t really seem to matter, but it always seems to end up floor then bed.

I got woken up early today because the dogs have to be herded into a room by themselves when a non family member comes in. Dorothy and Crow are fine, they just like people, but Roxie and Sister especially bite strangers. They don’t bite a lot since they are tiny, but it’s important not to let it happen regardless. I don’t know why they are such little shits either because they were around people their whole lives. In any case since it’s cold they had to be in a bedroom and I had to be with them, which makes it hard to sleep because they whine to get out the whole time. I sort of dozed a little but basically I got my 4 hours of sleep and that was that.

In any case the power is fixed at long last and my cpap machine no longer breaks the power when you plug it in. or anything else apparently. The Teen’s old TV used to make the power turn off in my room when you turned it on for reasons no one has ever been able to explain. The electricians couldn’t figure it out so I guess no one will ever know why.

I’m looking forward to having new glasses since my vision has deteriorated a lot this last year. It held out for a really long time, but it’s finally getting bad enough that I can’t read things unless they are in a very margin of space away from me. I’ve always been near sighted, but not I can’t see things if they get too close anymore. I used to be able to see things that were incredibly close to my eyes, but those days are gone now. The loss of my eyesight has always worried me since basically my entire life hinges on being able to see. You’d think I would have made more of an effort to ensure the safety of my eyes, but I’m just as big an idiot as other people who don’t prevent rather than cure. Fingers crossed my eyes aren’t too bad & some of this damage can be mitigated with a little effort.

My left eye sees best without glasses, but it’s the one that has the worst problems. Stuff always seems to be floating around in my vision in that eye. Sometimes it clears up but not very often anymore. The right eye sees poorly without glasses, but is in better shape in general. I think I might have chronic dry eyes, or perhaps my allergies are just so bad now that they are just always going to feel dry and unpleasant. Eye drops help a little, but not for very long, so I have to keep pouring them in all day, which makes me think I look like an addict of some sort. Obviously not meth though, because you rarely see a fat meth head. Maybe one really early on, but not for long.

In any case, I’ll report what happens tomorrow, or in Friday’s blog. Maybe on twitter. We’ll just have to see how the day goes. If you’re super invested in my life you know where to look for my adventures already. It’s right there on the side of the page if you don’t…

Anyway, talk to you later taters.

You are really acing expressions lately.

Ah, Thomas… I love how he can be perfect honest with Nina here, and how she knows him well enough to give a perfectly accurate, yet optimistic in her own way, response here.

When it comes to the money versus sex argument I look to the rules of acquisition. Lathinum lasts longer than lust, rule of acquisition 229.

Nina speaks truth, but Thomas is right, too. I guess it’s a guy thing to hold onto things until they grow small, hard and cold… like hearts

You are about the age now that I was when the eye doctor told me I needed trifocals. I’ve worn bifocals for almost 25 years. I beat the system by having a second pair made for just computer distance. I can’t read with them and even walking downstairs wearing them is risky, since they distort at long range. But since I spend most of my awake time at the computer one way or another, they make sense for me.

Perfesser_Bear has the right of it.
But WE have macular Deg. in our family, and so I asked the doctor, “What might be done, now, to slow the onset?” And she responded, “Oh, not reason to postpone it, we can prevent it.”
The awaited answer: green leafy vegetables, e.g. kale, collard greens, beet greens (yum!), spinach, mustard greens, etc.

Here’s one link to info: http://www.joybauer.com/vision/how-food-affects-macular-degeneration/
I, personally am thrilled to know this, cause Eyes!!!