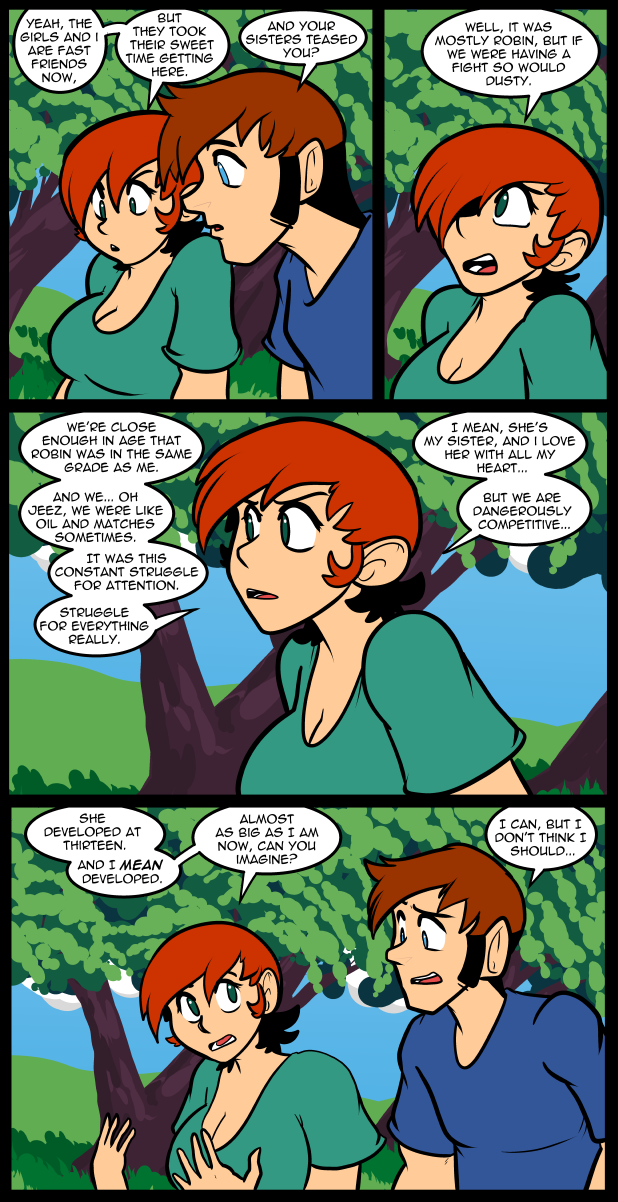 This, and really a lot of Carol’s backstory, are loosely based on a series of conversations I had with coworkers. One in particular, but a few others thrown in here and there. The one that I pulled a lot of these next few pages from was a really weird interaction. Once she got going all this stuff about her sisters just kind of spilled out. She was older than me by a little under a decade, married with kids, and I had the most ridiculous crush on her. Ridiculous in that I knew the entire thing was pointless because she was totally devoted to her husband and family, but there we are. The human mind is a broken piece of shit and that’s just how it works. Anyway, that conversation stuck with me for a lot of reasons, including that it was so unique in my gallery of stories like it. She’s a lot of the framework that became Carol. A lot of why I was so drawn to her was that she was absolutely in love with being herself. She reveled in her own being and celebrated the differences in other people in a genuine way. I’ve never met anyone else quite like her. The one story she told me where she was having trouble coming to terms with being herself was the one when she was growing up with her sisters. She had 4 sisters though, so it was even more of a mess. I had one sibling and she was such a terror I can’t even imagine surviving childhood if there had been two like her. You know what’s funny about the whole thing? I can’t remember how she started working with me, or how she left. I can only remember the middle bit. I also remember meeting one of her daughters, who she had raised to be almost as enchanting as she was. She was a bit too young for me, but I could see the echo of her mother’s struggle to accept who she was in the one conversation I had with her. I expect she grew up to be a very confident and caring person. Carol’s angry side comes a bit more from another lady I worked with who I thought was a riot. She was probably in her 60s at the time, maybe as young as 50s, I’m not sure. She was not one to suffer a fool, and she could destroy a person with her wit. She was super worldly too, having traveled and lived in a lot of places. If our age difference wouldn’t’ve been so vast I would absolutely have made a pass at her. It was hilarious listening to her handle shitty customers. She was so much faster and smarter than them she could have them apologizing for things they didn’t even do. Carol’s ten second test comes from a series of things she did to a new hire that should not have been hired. Anyway, that’s a little look in on Carol’s origins. She’s very much an amalgamation of relationships I’ve had. Probably the most out of all the characters with the possible exception of Nina. It’s hard to quantify that sort of thing.
People tend to open up to me very easily. I’m not 100% sure why, but I think part of it is my tendency to listen with an air sincere interest. I was every female coworker’s big brother, or son, or nephew, or whatever. The younger would tell me shit that they wouldn’t tell their partners, which caused me to develop emotional connections, while they seemed to look at me as a word sponge. After a while I got really sick of it. I was basically the ear their significant others should have been. It started to seem like I was helping a lot of other dudes get laid, and that’s really annoying if you aren’t even getting a thank you. After a while I tried to keep as much of a distance between myself and female coworkers who were in my age range as possible. Tried, but failed, generally.
Pretty much the only good things to come from all of those conversations was one girl making me read Harry Potter and the content I could use later. So I guess the comic itself kind of counts as a good thing too.

How old are the characters in BF?

Will we ever see Carol’s sisters in the comic?

Yes, next week, I think, and a future storyline.

It would really be interesting to see flashbacks of the Graves sisters, better yet to see those of Carol during the ascending stages of development (if you catch my drift).

Has Thomas already met her sisters ?

He has not met any member of her family knowingly.

Now I want to meet Robin, if only to “Look, don’t touch.” Carol has my sympathy; my two older brothers made life Hell for me for a while, and our baby sister could do no wrong.

I have met a ton of fascinating women in my working life; I’ve even gone out with quite a few. I’ve always been a great listener; even last year at our 40th High School reunion, one of my “Look, don’t touch” female friends sought me out and insisted I sit at the table with her — and the husband she dated and married and raised two kids with, because he reminded her of me. Ouch.

Funny that you mentioned women who were older or younger than you. When I was 28, I was going out with a woman who had just turned 40 (12 years older). She had two daughters, one 21 and one 19. The older daughter was a mess — her Mom said she took after her father ‘way too much; the younger one had her head on straight and was a hard worker, both in college and at her part-time job.

Oddly enough, that year was 1985 — the year my current lady friend was born. When we started hanging out, I was twice her age.

I knew one poor soul who was a freshman that developed like billioh. She was 14 with Fs. She got a reduction because that kind of weight was seriously destroying her lower back.

Funny thing is that I didn’t notice she had it done. Like four days after the proceedure a mutual friend mentioned it casually and I was like “oh she did?” And the friend was like “HOW DID YOU NOT NOTICE”

You are truly the one man in a hundred who honestly respects her when she says, “Eyes are up here…”

Dayum, girl must be super stacked by now.

The better question is which of the sisters ISN’T stacked, if any of them?

Not necessarily. She likely plateaued at that point or shortly after. That’s what tends to happen, barring teenage onset gigantomastia. Which can be quite unpleasant for the woman afflicted for a number of reasons.

Robin Graves? Dusty Graves? You really are fond of puns, aren’t you.

Too fucking right. Also, there was a family named Wood where I was born who named their kids Drift and Cord. XD

Yeah best not, save you a nosebleed

I always love looking at Carol’s snarky face. With the hair in her eyes. Positively dynamic.