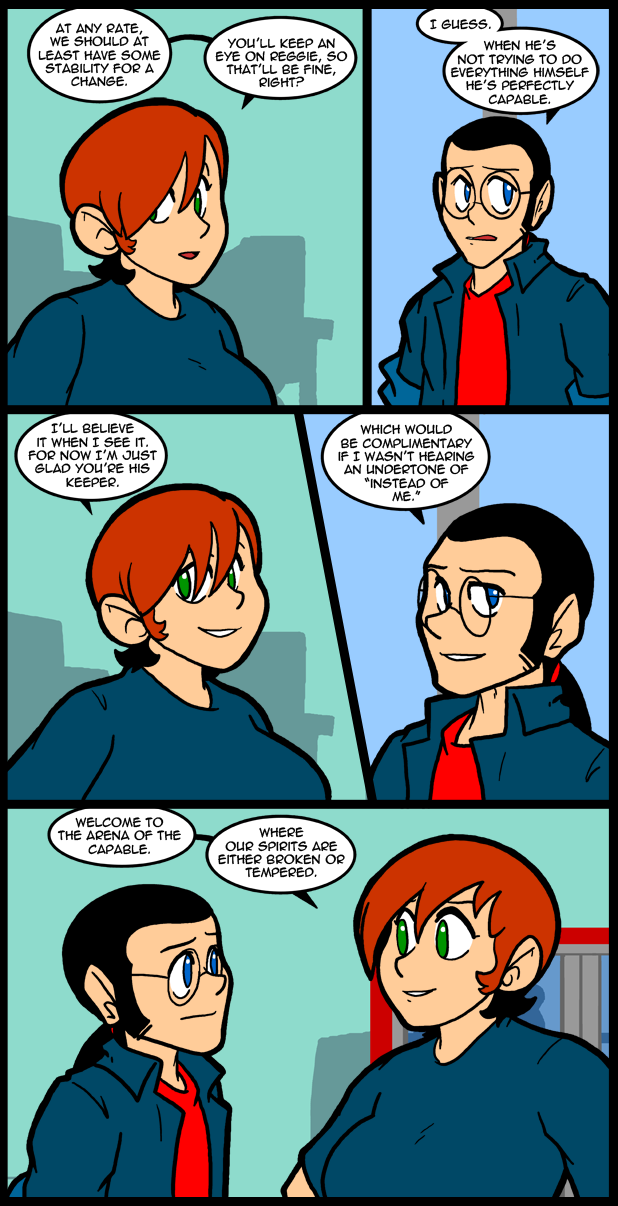 Retail has a habit of grinding down capable people. People can smell capability on you and will seek you out whenever the incapable fail them. Eventually you find yourself carrying everyone, and it begins to wear you down. Sort of like wearing a ring of power. If you get out of retail before becoming Gollum you should count yourself lucky.

I spent the last couple of days thinking it was July. How I managed to skip over a month in my mind is a mystery, but that’s the human mind for you, really. It was a relief to know that it wasn’t going to be July 4th today. It feels like it’s been nonstop holidays around here. I’m ready for some drudgery.

My Animal Crossing town is full of special flowers. Because of this I had been spending more and more time watering them as I bred more hybrids. It finally came to a point where it was out of control. You can enact ordinances that effect how your town behaves. Mine was set to night owl, which makes your city stay up late. Since I tend to play after I’m done with comic stuff it was the best choice. Unfortunately I can’t dedicate so much time to watering virtual flowers, so I told my town to fix it for me. Now flowers don’t wilt and weeds rarely appear. Basically I set the town to autopilot. I can continue my landscaping projects while not feeling like my game has become a job. That feeling has always been my problem with the Harvest Moon series, and is also why I don’t play social media games. There’s a threshold to my ability to care about virtual crops which they tend to exceed. It’s a very fine line though.

The game job problem is something that I’ve seen in other people when it comes to Warcraft. That seems to be what breaks most people of the habit. At least in my experience, and especially when it comes to what I think are called “raids”, or maybe “instances”, I forget the preferred term. At the height of its popularity within my social circle Warcraft dominated the schedule of many of my friends. Eventually they’d get sick of people taking things too seriously and wander away. Of course they seem to wander back from time to time, but such is the nature of addiction, isn’t it? I was somehow able to resist the peer pressure of Warcraft. After my terrible experience with Final Fantast 11 I wasn’t willing to give anything else a chance. This has saved me from several MMORPGs over time. The closest I’ve come to folding was Star Wars: Knights Of The Old Republic. I loved the KOTOR console games, and I’d really like to see what the game is all about, but it’s too dangerous. Sometimes it’s better to keep walking when you see a rabbit hole.

One of my oldest friends has dedicated most of his life to MMORPGs. Of course they started with text based games and have evolved into what they are now. I think Everquest was his first “real” MMORPG, which is where he met his wife. At some point I think an update ruined the world and he moved on to the first Star Wars one. That went on for years. I think Sony owned it… He finally quit that one when they ruined the game’s economy, just prior to its shutdown. At that point he finally fell into the loving arms of Warcraft. Honestly, I’m not sure if he’s still playing. Star Wars was always his first love. I’d be surprised if he hasn’t moved over to, or at least plays concurrently with KOTOR. His username was always something to do with Wedge from Rogue Squadron.

I should probably talk to him sometime… XD

I just got Animal Crossing about a week ago. I babysit often and needed a game that was great for killing time but didn’t need my full attention to enjoy. I’m liking it so far, though trying to get enough bells to get things done is a bit annoying at the moment.

Perfect fruit, or turnips, are the fastest way to go. Failing that catching beetles on the island after 5pm is how most, non-internet, players make fast cash. I have at least one of every perfect fruit if you want one to start with. The #turnipspike tag on tumblr is the way to go for the stalk market.

Oh, the sad sad trials of the battle-weary retail worker.

Unfortunately, the plight of the capable applies to any job, not just retail. When I got out of retail, ended up in a call centre for a couple of years. They kept piling more responsibility on me until I was doing a the same thing as a supervisor most of the day, taking those “problem” calls that no one else can supposedly handle. Of course i wasn’t

making any extra for it.

That’s how any job works, use the people who can get the job done to get the job done. Those who can’t, just make sure they are some place where they will do the least bit of harm.

You beat me to this. I’m the capable one at my work, so much so I was rewarded for my loyalty and competence by being given a remote office and flexible hours. I was pulled back into the main office after 5 weeks because it was going downhill w/o me there. Sucked then, still stings like a MF now.

They’ll get along just fine.

I used to know a guy like your friend. He was smart and capable of using his computer science knowledge well when he wasn’t playing Everquest. One of his closest friends started a business and tried to get him to come over. But he was so addicted to Everquest, he refused and accepted his parent’s offer to front him for college where he wasted a year playing Everquest. I lost track of him a few months after he failed out.

It sounds like your friend just has a hobby while mine had an addiction.

Considering that Carol’s 10-Second-Test (12 Hurry Up Activated) put her at odds with Ed for a while: “You. Me. Not friends,” (46 Not Friends!) they’ve developed a healthy mutual respect.

I worked in retail part-time for about four years. I spent a little over two years at Radio Shack, and almost two years at a real electronics store, one that sold (literally) lights and sirens, stereo and computers. I had a humane, half-way competent boss at the Shack, and the second place was a Mom & Pop shop that’s still going, 25 years later (they’ve been at it over 40 years, now). The only thing that made the Shack a drag was having to dress up in a plastic shirt and plastic tie to sell plastic radios to plastic people. Well, that, and the asshole weasel of a District Manager we had.

Some of my Security jobs were more of what Jackie suggested. I had one where I entertained myself calculating what percentage of my life I’d wasted there. I was 19 at the time. Most of what would be considered the Management level — Sergeants, Lieutenants, et cetera, were promoted not for job knowledge or even time in grade, but because they had become an embarrassment and Corporate wanted them away from the customer.

I’ve had two IT jobs where I wound up carrying other programmers. These two morons were pretty much interchangeable — they’d come to me with some ‘problem’ and I’d wind up doing their job for them — until I started to refuse to even talk to them, at which time I’d be lectured by my managers for being anti-social.

In the old games, bosses would spawn in the game world, and it’d basically be a first come, first served scenario. People would wait for days trying to get the damn things.

Instances were a leap forward in that you weren’t competing against other people for access: the area where the desirable dude hung out was “instanced” for each user.

A raid is a term for a specialized grouping of players, more than are normally allowed to be grouped, to allow players to fight bosses with too much health and damage for a normal sized group to beat them. Originally, these larger groups were formed to “raid” other factions in various games, I believe, but the terminology has since evolved a bit.

My first MMO was Lineage II. There were no instances in that game for a very long time. Of course, that game focused on competition, level grinding, and PvP.

It was Lineage II that made me come to terms with the fact that I had become a casual gamer. I just didn’t have the desire to spend the time logged in that it required to stay competitive in that game.

I only briefly played Auto Assault. I wanted to see what it was about, but I didn’t know anyone who played. I decided to just run off to WoW because my brother played.

I played WoW for a couple of years. I got in about a year or so into vanilla. The Burning Crusade was the only part of WoW I played from its launch to the launch of the next expansion.

I pretty much missed the rest because of school, though I did get a chance to play about 7 or so months of Pandaria.

I got a warrior up to level 90 for Warlords of Draenor, but I have a problem. Wildstar is out. I really want to give that one a spin. The problem is I would have to get a far nicer computer to really be able to play it satisfactorily. With this computer, I still had most visual effects turned way down for World of WarCraft. It’s a more powerful computer than the one I used to play on, but most of that got eaten up by making the jump from 1024×768 (was 800×600 until I finally went from 256 MB to 1GB) to 1440×900.

The short of it is this: I like my MMO’s, I just haven’t had much opportunity to really indulge in them since about 2008.

Wait, no. I lied! My first MMO was Ultima Online, but I only got to play it for 2 weeks when I left for boot camp. I didn’t have Internet access for the next year and a half, and by that time, I didn’t care anymore.

Love the typo (in the rant). Apropos, might want to google for “cow clicker” (Ian Bogost) for some insight into “social” games.

I was about to say something about how good leaders grow their own cadre of the capable, but I wouldn’t be surprised that doesn’t work so well in retail, over and above the notable dearth of good leadership everywhere.

” Sometimes it’s better to keep walking when you see a rabbit hole.” S’why I don’t read (watch?) MLP. A lot of comic writers that I like say it is very well done. Bad enough admitting my addiction to webcomics. I don’t need to add,”Oh, and one of my favorites is My Little Pony.” I get no respect as it is. (Granted, no reason why I should, but I don’t want less.)

Working in retail, I know how that is. Being capable gets you so far, but irrationality pushes you further.

Yep, my sanity has been questioned and reined in… :(