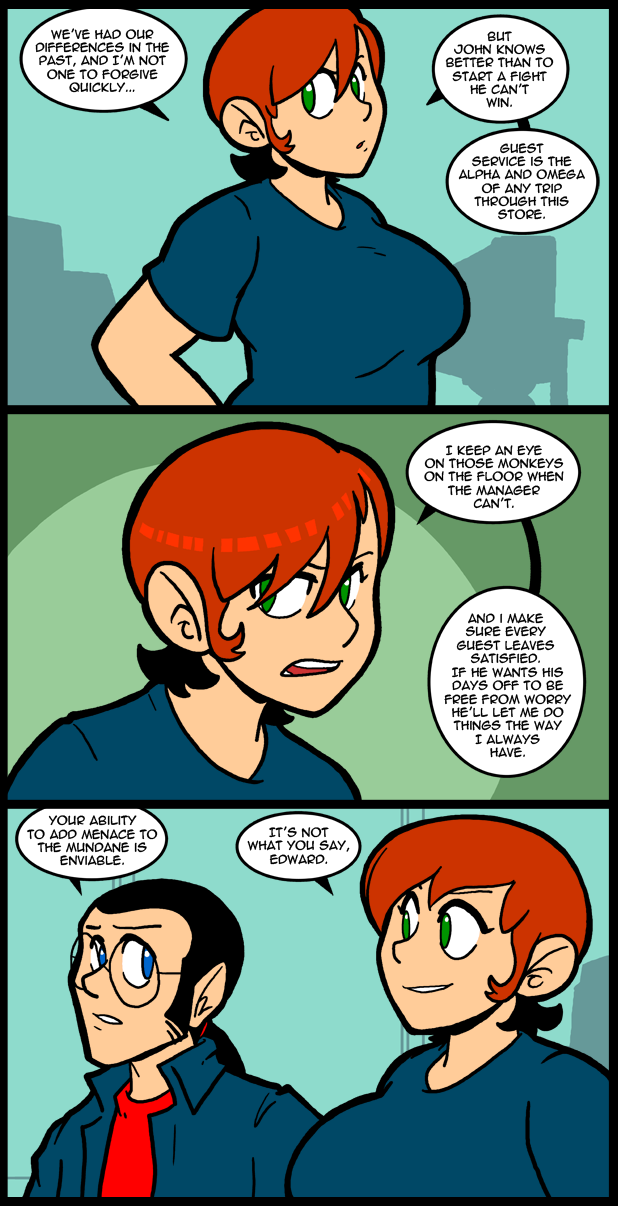 I’m still on the road. When I get back I’ll give you a report.

Today we all went to wish my grandfather a happy birthday. It was all the degrees outside and many of them managed to infiltrate my grandparent’s house. In spite of this, and having taken an allergy pill that made me very sleepy, we managed to get the job done. We also returned Rainbow Dash to her natural environment. So that’s where I was returning from when the comic went up.

A few words about Mario Kart 8: it is exactly like other Mario Karts except for being uncommonly beautiful. It is seriously one of the prettiest games I’ve ever seen, even over AV cables. It must be stunning in HD. They also came up with a blue shell defense item. EVERYTHING IS FIXED.

State Of Decay: Lifeline is very intense. The time limits for missions are extremely short. You have to pick and choose how to spend your time wisely. Every few minutes zombies assault your base and you have to actively defend it. I’ve almost never had a character die in any other State Of Decay mode that wasn’t on purpose. I lost my CO in the first siege. Lack of experience cost me big time. I went in to the game knowing that this would be a possibility so I made a point not to get too attached to anyone. Still, she was a badass, and it sucked. She went down defending someone from a big boy. I just couldn’t get there fast enough. I’ve lost a man in every other siege, and not the ones I keep hoping will die. The drunk who I can’t take on missions makes it through every time, but the capable people are getting mown down like so much lawn fodder. Anyway, it’s well worth the $7 if you have an Xbox or PC. (At least I think it’s on steam or something.)

This particular page does not stand by itself very well.

I am already somewhat enjoying the idea of Caramel Kiss. Caramel is my favorite candy, and cats are… well, … cats.

It took me some time to progress past my house in Chrono Trigger, but I did get it all out of my system by the time I left.

Sometimes a fart joke must be sacrificed for the larger narrative.

Don’t get on her bad side and you’ll be just fine.

Should be “add menace” not “ad menace” shouldn’t it?

Either that, or “ad menace” as in advertise…

Oh man, with the right TV and cables, Mario Kart 8 looks unbelievable, especially when compared to Mario Kart Wii. Divert thing is just so damn pretty (even the spinning fires of doom in various tracks can’t help but be appreciated)

Fortunately, the game pad can produce a pretty slick image, so if the TV is occupied, you can always just look down & play on that (I like being able to switch what’s shown on the pad on the fly, along with control type without needing to pause)

Wait.. since when did John and Carol have bad blood? I’ve read this thing from the beginning and I don’t remember that.

As I said Friday,

“For those of you who haven’t read the Archives recently, Carol and John’s animosity is cataloged here: /comics1/157-spider-sense .”

Their animosity is cataloged, but what of the reason for it? I’ve read through all these pages and not…even…once…is their hatred for one another given a backstory. Unless Carol just indiscriminately hates slackers, no matter what they’ve done to her, and gives John hell at every turn.

Which brings me to my next point: how dare she call them lazy, when all she does is stand around and handle paperwork?! That isn’t work, it’s fucking white-collar child’s play!

@Brandon, I think you may have answered your own question, and got it right. Judging from Carol’s own backstory as a college Party Girl, I believe when she turned her own life around, she turned her back on the slackers and frat boys with whom she used to party. John may remind her of her misspent youth, and she will tolerate no slacking off on her watch!

I’ve had two über-alpha female dogs in my life. Both of them lived for any opportunity to remind the rest of the pack, “I’m the friggin’ boss!” Carol may come from the same mold; she thinks being the boss — at whatever level, means micro-managing the troops, aso they never forget that she’s the Alpha Bitch!

That’s not what a guest service manager does. It varies from store to store, but they manage the registers, stock the consumables, make coffee, popcorn, or what have you, depending on the location. They direct guests and staff to the correct areas, assign duties in the absence of a manager, do the final day count… They are either the first one there or the last one to leave, almost every day, and never get to leave the front of the store. In my opinion it’s one of the worst jobs in the store. They have to run register all day, deal with shitty customers, and never get to wander around. Once you do all the cleaning, on slow days, the job basically becomes standing there. In most stores the gsm is the defacto assistant manager, and sometimes, in the absence of a manager, do that job until the position is filled.

Carol has distilled the ability to strike fear into the hearts of clerks into a single glance! And yes, delivery is half the message.

I’ve never hooked up a game to my HD, — my latest console is a Mattel Intellivision from 1982 — but I have a Home Theater Personal Computer (HTPC) hooked up to my HDTV. The PC connects via HDMI cable (my keyboard is running low on Hs, now) and the images are stunning. I’ve still been running the TV audio through 1950s-technology copper AV cables with RCA connectors. Last week, my brother ordered a 20-foot optical fiber cable; we shall hear if there’s a difference…

l like how Carols looks in panel 2, her hair is so cute I love it.

How do you expect anyone to stand up to carol with her boobs and sincerity sticking out like that.

I don’t see how anyone gets into a fight with Carol, without her starting it, as everyone would most likely hit on her.

I agree on mk8. Best mario kart yet, we still need more blue shell defense, and the item randomizer needs a look over, all I ever seem to get is coins, bannanas, and the occaisonal shell or shroom. But the courses are well made, prevent snaking pretty well, and are beautiful. Overall a grand expirence.

I keep reading this page as Carol and John trying to lay their claim on Princess Thomas. I’m awaiting the jousting match between the two to settle this once and for all.

She has the scariest way of saying “I make sure every guest leaves satisfied”! :D I know Ed kind-of said that already, but I felt like picking it out.