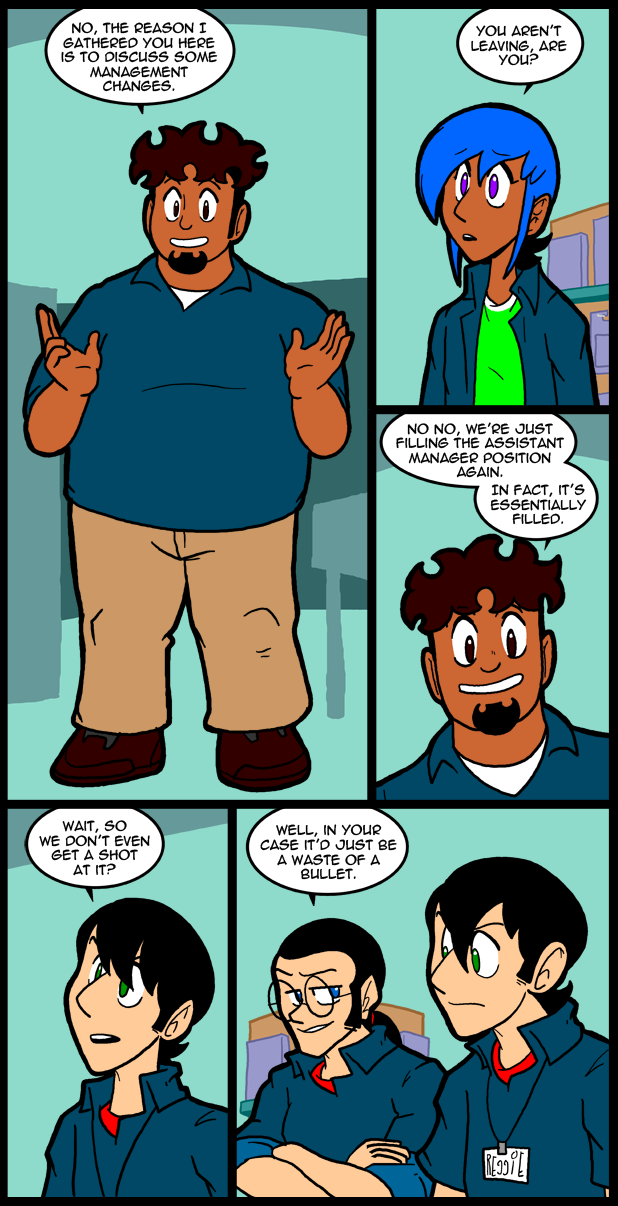 Ed is such a smug bastard sometimes.

I made a mistake the other day. The teen made me play video games in her room, then got distracted by teen drama, so I played State Of Decay: Breakdown on her TV in HD. I could read the text! Now that I’ve had a taste I want it all the time! Why did I do it!? WHY!?!?!?! My TV can do HD too, but it’s that first generation of it with the RBG wires, and there’s only the one input. It’s a hand me down, so it’s a bit outdated by technology standards. I don’t have the RBG hook ups for my 360, but even if I did I’d have to switch it between my DVR and the Xbox, which is almost impossible since the TV weighs a billion pounds. Once I got the thing in the stand I almost couldn’t get anything hooked up to it because I couldn’t shift it without help. I can practically juggle flatscreens since they’re so light.

Another thing that happened is that the headphone jack on the old TV suddenly stopped working with certain headphones and cords randomly one day. It also happened on my PC and I can’t figure out why. Except one day I was barefoot and the extension cord was plugged in without the earphones and a spark jumped from it to my toe, which I’ve never seen happen before. Even then I have no idea why it would ruin the unattached headphones. Maybe it’s just a coincidence. Other headphones work, but not with the extensions for some reason, and the extensions work on some other devices. It’s totally insane. I always use headphones so as not to disturb anyone since I keep odd hours. It’s a real problem.

My sorting and cleaning got disturbed by other life events, so I have little piles of old games and stuff here and there. I have some spare third party Dreamcast controllers for sure. They look janky, but are in good shape. I have no idea why I bought them. I don’t remember ever having 4 friends who would play Dreamcast with me. I found all the parts to Hey you, Pickachu, so that can be sold all together. Not that I expect it to, but whatever. I may even have the box someplace. I got it from a Hastings so the box looked like shit when I bought it. I’m pretty sure I have all the things for Occarina Of Time. Since there’s a ton of ways to play it I’m not worried about not having it. I’m pretty sure I have Majora’s Mask as well. Not as much about the book and box for it, but I do have a Gamecube disc that plays both of them, so that’s safe. I’ve got all of Ogre Battle 64, which I think is rare, but I haven’t looked. I bet with the box and book it is anyway. I’ve got at least one spare N64, but I’m not sure where the jump pack is. I know I had an extra at one point, but it’s location is currently unknown. I have a stack of old NES games to get rid of. No extras though. All three of the Double Dragons, with extras of 2. Shingen The Warrior? I forget the exact title. I’ve been considering selling the Megaman collection too, but I’m still on the fence. I have all of them. The only incomplete one is Megaman. I got it used because it was already out of stores when I got Megaman 2. Anyway, the whole storage situation looks like an explosion at the moment. I’ll have to get back to that when time allows.

How will Reggie comeback from that one? (Probably with some assassination joke)

And then Reggie returns fire with a tactical nuke.

You’re god damn right, he will!

But he’ll bloody his own nose in the process.

Emphasis on the word, “fire”.

I wonder who will assume the assistant manager position? Also, if it’s Carol, who will replace her?

We could be seeing Jess on the staff.

I thought that earlier it was mentioned that there was no more room to hire more staff, which is why a current staff member needed to be promoted?

Please tell me you have not gotten ride of Ogre Battle 64 yet?
How can I go about purchasing that from you?
Is there a way we can communicate this through so that we both walk away with something amazing, You with some extra $$ and myself with Ogre Battle 64.

You can get my Email from my name, PLEASE, I am begging that you contact me.

I emailed you, but typically it’s the other way around. XD My email is in the about section.

Yeah, well, Reggie had it coming. He’s been, shall we say, less than civil to Ed, really digging in with the ‘short’ jokes.

I miss Wesley Asel. But my aim is improving…

Regarding your headphones you will find that electronic components are *extremely* sensitive to static shock (ESD). The static shock you feel when you touch something, not the kind that hurts, just the kind you are conscious of, is around 3000 volts. You can do major harm to unprotected electronics with less than a tenth of that. Whats my point? That if you saw the arc (much higher voltage) between you and the cord, then there is a high chance of damage, even if it wasn’t plugged in. Fried electronics can be flat out broken, but they can also become very unreliable, working sometimes and not working others, things like that.

Just an IT guy’s two cents.

Is it possible that your TV just doesn’t work with headphones and earbuds that can control volume/have a microphone? If you look at the jacks of there kinds of headphones you’ll see that there are three rings rather than two. It’s called TRRS and some devices really hate them

Static is very unforgiving to older audio systems. If you are up to it, check and if necessary repair / bulk-up all the connections. Over time solder connections can and will crack between connectors, wires or circuit boards. The more common and annoying point of failure is the actual jacks themselves where the spring contacts either get loose in the housing or lose their ability to always make a good electrical connection. Easy enough to repair or upgrade with basic solder skills depending on the configuration.

Yeah, especially the cheapest components. Of course, ports can be tough to solder properly since the circuit boards are multi-layered, and if you solder it wrong you ruin other components or the whole board.

If you’re still willing to sell any of those games, send me an email. I’m interested in all of them.

I love that smirk. I wish I looked half as devious as that when I grin.

Oh noooooo!!! I’ve been archive binging your webcomic for about two weeks, having seen an ad for it on QC, and I absolutely love it! But now I’m up to date, and I have to wait for regular updates like a normal person! Woe unto me!

Same deal with me, but about two months ago. its okay, this comic is worth the wait and really well done, plus it juggles well with QC

Hey Crave, just out of curiosity, can we get a rough time frame from comic #1 to the present?

Where is Wes? Has he been given the sack or someting?

Man he’s wide.
Like the sun. Orbiting over our heads providing vital energy and light to our slowly dying planet.

I read the first book back when I had a girlfriend. I realized two things pretty quickly:

1. I had not read a book written in first person before.
2. It was weird being a teenage girl.