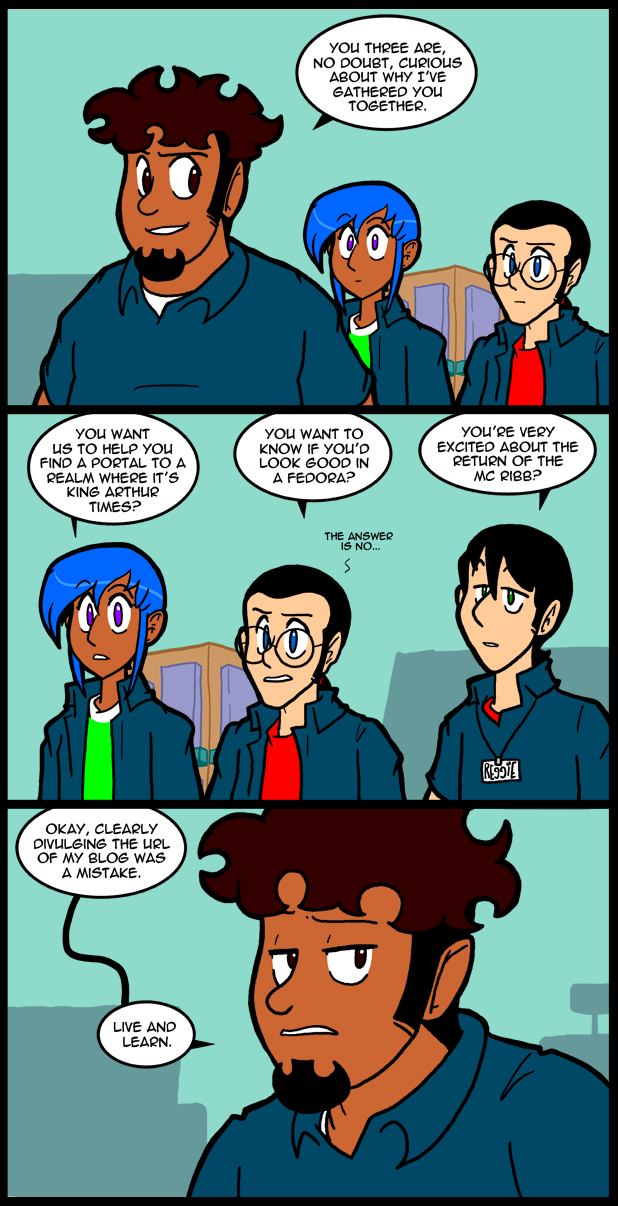 First of all, thanks for all kind words on the last page. I didn’t have time to reply to most of them yet, but in case you never go backwards in the comments please know I appreciate the support.

I watched Ghostbusters again the other night. I hadn’t watched it all through for a very long time. The passing of Harold Ramis made me think about the film a little deeper, in spite of the teen being unimpressed. Subtle humor tends to be lost on her… Anyway, I took a lot of stuff from that movie as a kid. Copying mannerisms I saw eventually became part of who I am. This is true of other movies of the day, but Ghostbusters was never tarnished, or revisited in a way that changed my perspective on it. As opposed to Star Wars. Which now has to be viewed through the prism of prequels and piles of expanded fiction. (Most of which isn’t even “real” now.) Ghostbusters remained basically how it was after the films stopped and the cartoon ended. The second movie matched the original tone, and even the video game eventually did the same. I’m glad it remains unruined, for now…

I finished Link Between Worlds, by the way. I kind of did it on accident because I thought I’d run across the red mail before the end boss, but I just breezed right by and defeated it without realizing that there wasn’t going to be a further twist. So I beat the game with the blue mail. I might go back in just long enough to get the red mail, just to my street pass Link will be fully powered up.

Just what is his blog’s name I wonder..

Ooh maybe a fictional blog should be made for Mike as the writer. The hilarious possibilities of the mind that is Mike.

I think you just named his blog

This lifted me out of a sicky, sniffly, hacking cough gloom. Thanks.

I agree with you about Ghostbusters, though. I love how it’s been left alone…the remake happy Hollywood makes me worry though. I really hope they don’t decide to destroy it later on. I almost would have expected the teen to like it, maybe it had to be something you grew up with? I don’t know…how does you two feel about Robin Williams movies?

I like them on balance. I don’t think she’s seen any of them. I might be able to get her to watch Dead Poets though. Kind of up her street as far as drama goes.

Depending on your tastes, my suggestions are Patch Adams and Mrs. Doubtfire…Mrs. Doubtfire definitely isn’t subtle…Also, what are your thoughts on the Back to the Future movies? …heh…I’m realizing I’m actually a little young for my own favorites at the moment.

I actually like all of them. I don’t think 3 is as weak as some people do. I mean, they were never Shakespeare. I don’t think remaking them is a good idea for the most part, but I feel like at least one will be. If they manage to make it hold up as well as the original I’d be surprised.

I really like them all. When I was younger, part 3 was my favorite, but I wanted to be a cowgirl when I was little. It’s hard to have a favorite now, since I feel incomplete if I don’t bingewatch the entire trilogy in a sitting. Remakes to me usually feel like a bad idea, as a general rule.

Heh. I’m derailing the topic a little bit, but I liked Robin Williams in Pop-Eye. I got the DVD a couple of years ago.

Honestly, it’s a really slow-paced movie. The only really good part is the climax, but they did do a good job with it. Okay, there is another good part. Pop-Eye has always been known for his quips he makes that you really have to listen for or you’ll miss a good joke. The movie kept that going.

I think I know why the movie wasn’t quite as good as it could have been. I got a very strong sense that it was put together like a stage production, but it was put on film. Having the camera focused on a small part of the set made me feel like I was missing something that was going on elsewhere.

I don’t see it as derailing, I mentioned Williams and we’re just taking movies, so no harm done. I’d never seen Pop-Eye, I’ll have to look it up.

It’s actually very true to the source material. Popeye was a breakout hit in the comic Thimble Theatre and eventually surpassed the original lead character, Harold Hamgravy. Harold actually appears in the film along with several other mostly forgotten characters.

I find it fascinating that Robin Williams played both Oliver Sacks in Awakenings and the title character in Patch Adams. Both great movies, and they helped me to appreciate Williams as an actor — but a little unusual he chose to play two sympathetic doctors as characters. He really nailed What Dreams May Come, too. What a beautiful movie, and he gave it just the performance it needed.

Sort of what Jim Carrey and The Truman Show did for each other. And that might be an interesting movie to watch The Teen watch, if it didn’t bore her to tears.

I actually took the opportunity to see The Truman Show in the little $2.00 base theater when I was stationed at NAS Pensacola. I liked it quite a lot. I decided to buy the soundtrack, but I never bought the movie.

I have to admit, it was nice seeing Jim Carrey in a movie where he was supposed to be taken seriously, and he managed to pull it off.

Um… I’m assuming you’re not aware of the Ghostbusters comic book by IDW?

The last time I read it, it was awesome. I have no idea if it’s still running.

That’s too new and didn’t really capture the spirit of the work, I felt. At least what I saw was that way. If it’s ongoing maybe it pulled itself together. It’s always been to hard to get comics out here.

Those were some nice, varied answers.

What’s a McRibb? I’m Australian and it wasn’t released down here.

It’s beef slurry shaped into a boneless rib shape, covered in a bbq sort of sauce, and placed in a bun. It’s the mcnugget of beef.

Not sure if that’s good or horrifying.

Oh. I was under the impression it was pork-flavored Pink Slime. On a bun.

A few years ago, I don’t remember where, there was an interesting article out there on the economics of Mac Ribb. Seems it has to do with really low pork futures prices, and more. If you know what economic indicators to watch, you can predict the return.

I really thought it was beef, goes to show you how little it resembles whatever it starts as.

Wow. That is so accurate. Except the McRibb is kind of tastier than a McNugget.

Which reminds me of a great SNL sketch that had the line, “If the McNugget is where I think it McCame from, I don’t want to McEat it!”

(And of course, “Who were the Ad Wizards that came up with this one?”)

It is a ground, chopped and formed pork patty pretending to be BBQ ribs. (No it is NOT beef, contrary to what was written by others here, I used to work at McD’s when they came out, and in the pre-cooked form it’s more obvious) covered in a brown sauce with too much salt and cheap spices and high fructose corn syrup, pickles and a creepily crappy bun. I’d recommend it be fed only to your VERY worst enemy, as opposed to the rest of McDonald’s menu, that I don’t recommend be fed to anyone.

I think Mike would look fine in a Fedora, I know I do.

Everybody knows that Plaid Cabbie Hat are where it is at. ^_^

Mike with a blog — heck, why not? He’s an interesting character; into the whole sword-and sorcery thing, a little older than the rest of the crew, but not and old fart who remembers the world before D&D.

Even my 15-year old niece has a blog — I won’t post the URL, because that could allow some skulking stalker to watch her — that would be a a bad thing (I also think it could be used to backtrack my offline identity, which could be a bad thing, too). I happened across it yesterday, and it surprises me a little how lucid and imaginative she is. I mean, I knew she was smart (you should meet her parents — both University graduates). Already a noted actress and ballerina. She’s heavy into everything from Homestuck to Harry Potter, with a heavy dose of the Doctor. Which reminds me, I need to stock up on Studio Ghibli for my next visit…

Somehow I have trouble believing Reggie took that much interest in another human being. That isn’t Nina.

Heh, love the smart ass answers. He should know better than to ask a question like that.

I still haven’t learned not to ask two different questions in one sentence. I normally get one answer, and I either have to ask again, or wonder which question the person answered.

Speaking of Ghostbusters, I gotta ask you Crave, and all you commenter guys of awesome, what’s your favorite quote or moment from the movie? <3

“If someone asks you if you are a god, you say YES!”

Forgot to drop mine in here.

Know I don’t qualify to reply, but here I go anyway. “EEWWW. Somebody blows their nose, and you want to keep it!?!?”

“Well that’s what I heard.” It’s a subtle line in the middle of a lot going on, but it’s also Bill Murray at his finest.

I sometimes catch myself saying this in place of profanity.

“Let’s show this prehistoric b1tch how we do things downtown.”

When I finally graduated from College, my brother had a shirt made up that said, “Back off, man. I’m a scientist.”

My quote is actually the line right after the “no dick” line.

I’m not sure what my favorite line would be. Most of the dialog is quotable. I think one of the best scenes as far as character development is the one where Ray and Winston talk about the book of revelations. It shows that Ray, more than the other team members found a kindred spirit in Winston. Peter is one of those male friends that’s kind of bad for his other friends. On the one hand he looks out for them, but on the other he uses them. Winston treats Ray more as an equal. They carry this theme into Ghostbusters 2, which is why I think I’m not off base with it. At the end when Winston says “Ray, has it ever occurred to you that the reason we’ve been so busy is the dead HAVE been rising from the grave.” is the most chilling line of the movie and I think it’s significant that Winston is the one who sees it first. Ray’s reaction to the statement speaks volumes without actually saying “Oh shit… you’re right…”

he lies Mike would look good in A Feodora.

Hooray for the return of the bat-goatee!