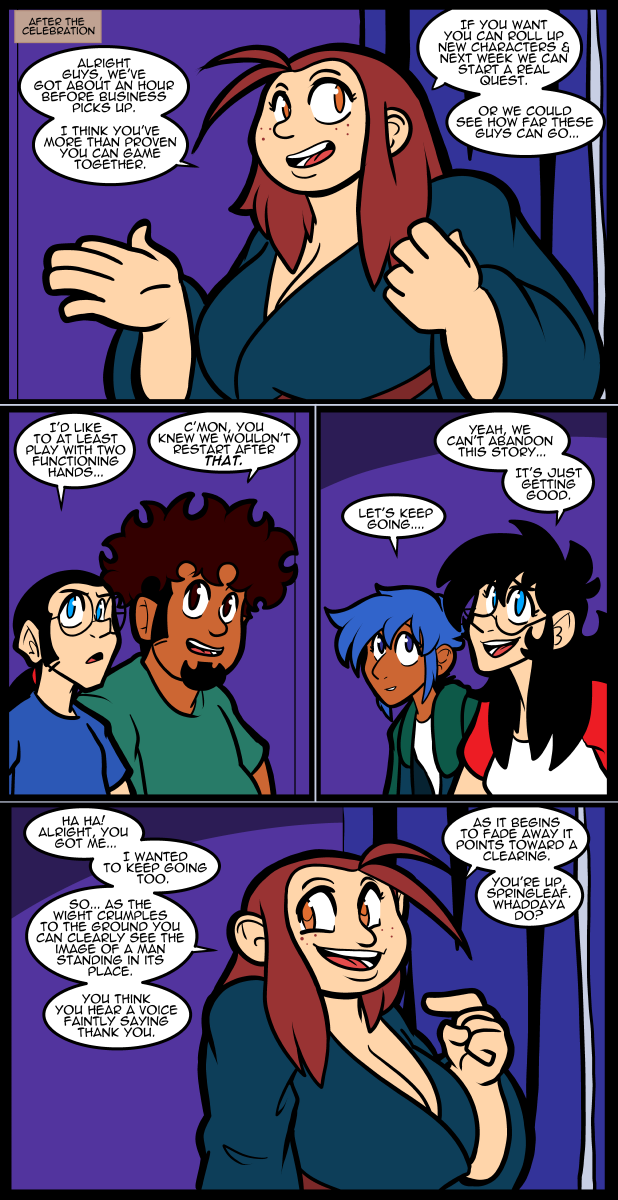 All these page numbers remember me of the years I was a small. I wonder what was going on in 1988… I think this was just before the gulf war started. My memory is more a mish mash of events than dates connected to things. I just know this was kid times for me. Soon there will be more pages than years our society has been counting years.

I prefer to say things in interesting ways if given a choice.

Some jokes improve with a bit of revisiting.

“I love it when a plan comes together!” – George “John ‘Hannibal’ Smith” Peppard

What roleplayer worth their salarium wouldn’t keep going at this point?

The Gulf War (Round 1) was ’90, wasn’t it? I was in my 2nd last year of high school, & a bunch of teachers cancelled classes so we could gather around a TV to watch CNN reporting of it as the first air strikes went in.

I think the big thing in ’88 may have been when the Warsaw Bloc started to come apart, or was that ’89? The writing was on the wall by that point, certainly.

The Berlin Wall came down in 1989. I know that for sure because I visited the site two days after the big celebration with my high school tour group and it was surreal. There was a huge hole in the wall, with Soviet soldiers in guard towers yelling at us to stay away since they had been abandoned by the Red Army and were awaiting orders to leave (so they were really paranoid and worried). There was a few pieces of newspapers blowing around the street and lots of painted graffiti everywhere. Other than that, the plaza was empty and quiet. Hard to believe that just days before, there were rioters and celebrations going on as people tore the Wall apart.

For me, 1988 was the year that I did so much stuff because I was high school freshman. I had a real girlfriend, I was doing well in school, I was in sports and band, and I discovered the world of Krynn. Also – Information Society and the Pet Shop Boys were having the best year with their music, so it was kinda one of those “good ol’ days” you read about.

Whoops, sorry, that 1991 when I went to Berlin. Not 1989. But you’re right – the Soviet Union was starting to fall apart in 1989 when our “Star Wars” initiative drove them to spend more money than they had to counter our space program. That and their economy had a huge dump and the Bread Line Riots were starting.

In 1988, the bombing of the Scottish airline 747 that caused a great deal of attention to the Irish terrorists in Northern Ireland and the US ship that shot down an airliner coming from Iran because they made a mistake in thinking it was an enemy plane were the other two things I remember. Lots and lots of news about those things.

1988?
Well, Star Trek: The Next generation was just starting its second season. Picard still had a slick hairdo.

Welcome to your 30’s. When you realize you didn’t die before 30 like most young people say (“I hope I die before I turn 30,”) and that everything might just be okay. You’re not famous, but hey, you’re not exactly in prison, either.

Such desires to die before 30 were nothing more than self-fulfilling prophecies and in retrospect, what real end would it accomplish? Just because you don’t want to handle the stresses of life doesn’t mean you’re guaranteed peace in death.

A blazing star is born!

In 1988, Lee Atwater ran a campaign of ugly, naked racism to paint Mike Dukakis as a squishy softheaded liberal. It was so ugly and flagrantly inaccurate that the Dukakis campaign thought it was beneath dignity to respond at first–but it worked, and threw us into Bush country.

As an adult in the ’80s, the only good thing about the times was being young. A lot of good people and good things about the republic I grew up in were destroyed in those years.

Lee Atwater later died of brain cancer, and said on his deathbed that he regretted a lot of the harm he did. I’ve seen too many people die of cancer. Mostly, I wouldn’t wish it on anyone. Atwater is one of the few I have no sympathy for. If there is a hell, his table is lightyears away from the bar.

My first presidential election, and the predecessors to the neo-cons effed it up. Atwater led to Rove and …
My kids think the republic is doomed.

Well, one thing that, I won’t say [was wonderful], about that era, but I will say one that was fortunate in the Cold War, was:

1) The US + the Soviet Union did [not] have a nuclear war over the Cuban Missile Crisis, and decided to move their nuclear missiles further away from each other, [which, to me, says a lot for the human race’s ability to walk away from showdowns that would cause unthinkable tragedies, and humans’ ability for self preservation].

2) The US…and its allies, and The Soviet Union…and its allies, did [not] have a limited, or even a full scale, nuclear war from the 1940s – the early 1990s. And these people avoiding that war is also very fortunate, since this would have been a larger nuclear war, than the war that could have happened over the Cuban missile crisis.
The larger nuclear war would have destroyed even more countries, and possibly have threatened future countries, with a nuclear winter.

This is probably one of the most dark things that I’ve written on the internet, but- I agree, the 1980s, and later years, were not [a bed of roses] for a lot of people.
However, in today’s world, I think that the possibility of nuclear wars is a lot less, than the possibilities of nuclear wars that we had in the Cold War years.

There were a lot of days + years in the 1980s, 1990s, and later years, that I’m not very fond of, but there are certainly ways that the Cold War years could have ended much, much worse.
In my opinion- the Cold war years were hard, but I am veryglad that they weren’t a whole lot harder.
Thus endeth the soap box speech.

Just to clarify-
maybe I didn’t totally explain it, in the above post, but…[is there a neutral + mild way to talk about such topics? I don’t know, but…] I am greatly relieved that during the 1980s period, a nuclear war between the US and the USSR [ didn’t] happen.

I think- from the 1960s + 1970s, + after, there was a real possibility that a nuclear war /a World War 3 could have happened, but luckily, the world’s nations decided not to have one.

The cartoonist, Allan C. Ecker, in his webcomic, Umlaut House, or maybe it was in Umlaut House 2, did an essay about humans and their accomplishments, and on their virtues and foibles.
[This essay has some of his drawings in it.]

In his essay, he was very proud, and maybe also thankful, that the human race, in the Cuban Missile Crisis, decided not to have a nuclear war, a war that could have destroyed the human’s world, and possibly could have killed all of the humans, in that war’s destruction.

I do agree with Mr. Ecker, a lot, in his essay.
I am glad that the humans of the 1960s gave up this foolish crisis, a crisis that could have ended everyone.
Two nations with Zeus-like powers confronted each other, but then decided to pull back from a huge, nightmarish war. This might sound talky, but I am very glad that the world didn’t go down that war-like path. That’s all I’d like to say.
“Thus endeth the sermon”.

’88 I was 16 and heavily into D&D 2nd edition iirc. It was a heady time, give a lot to have those days back

Amen to that. :)
I wish that I had my own car, back then, so that I could have spent all of my afternoons…in pools parties, and in huge, video arcades! :D