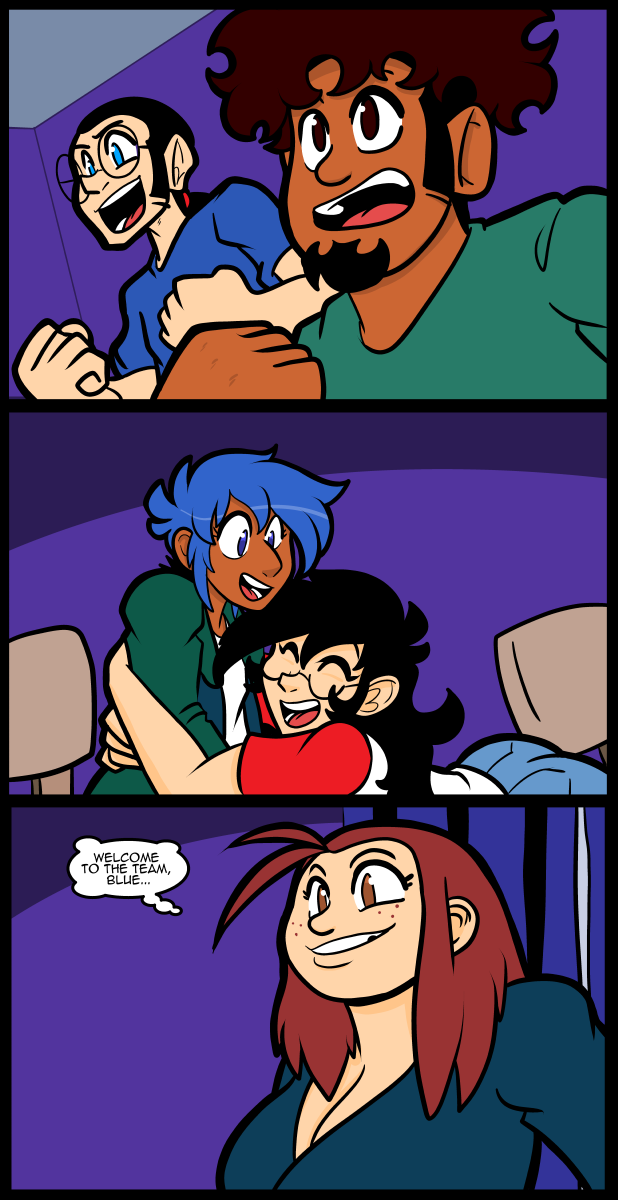 I figured you could imagine the happy sounds.

Oh, the happy sounds are playing in my head. Nice non-use of dialog in this one, Jackie.

I have no idea what you are commenting about. Blue better than red? They are just designations so you can tell the teams apart. Luke is in Gold Squad, someone else in Red squadron, blue squadron, or orange, you need a way to tell who is with which army, the colours don’t have an implied value of themselves but what you read into it. Which colour implies what varies from culture to culture. What do y’all wear to show mourning at a death, white? Or black? Depends on where you are. Be wary of asking yourself what the writer wishes to imply, if you are reading for implications.

Oh for the love of god…

Well, do they get points for word count, i mean really…

Watson on Vacation?
Missing that one board game?

Unless you’re in the old Soviet military. (Seriously.)

And the Red vs Blue series is a serious satire of that military way of thinking, and how ridic Bungie can be in telling a complicated story.

Yup, in the military world, blue is always friendly, red is enemy.

…And to REALLY confuse things- mention “the red army”, and then mention Poland’s army-like force…in World war I, named- The Blue Army.

Then Sarge would go on some long-winded rant and Church would just be done with it.

Except, of course, for the title.

Red Team: Count our corpses, go on, count ’em! (paintball hits the back of your helmet)

Reminds me of when I was a lad. I was playing a plain ol’ dwarven warrior, 1e adnd. Our dm put us through hell, two of our party members became possessed by evil spirits (One of which came from a ring I quickly identified as evil incarnate, but NOOO don’t listen to the bloody dwarf who’s background is blacksmithing and enchanting) We went through a dungeon, killed the big bad and garnered a range of loot One piece of which was something my DM called a Doom Dagger. If you hit something with it, it instantly killed the target. Miss and it’s gone forever.

Fast forward a few months. We’re up there in level, I’m near the cap for dwarven warriors, and my party pretty high up there. We run into the big bad of the campaign, a bloody Balrog dead set on ruling the world. The mages were turning out spells like it was going out of style, the ranger was trying to collect every ally that owed him a favor, and ME?

Garrick Stoneskin was as cool as could be. We walked up to that Balrog and said “Oi, ya great big git, yer messin wit me drinkin’ time. Why don’t ye come back later and maybe I’ll let it slide, eh?”

Of course the Balrog attacked. He hit me once, which is all it took. I asked the DM “Ok, so this guy’s fist is right in my face, right” ‘Yes….’ Can I nick him with a dagger? The DM, assuming I had some sort of poison said, “Roll your dex to see.” I make it by a country mile.

So I nick the big bad balrog with my dagger. The DM starts to say his next move when I say ” Wait, whadya mean he does that? He’s Dead.” No, you only did 3 damage to him. “Yes. With my only dagger. The Doom Dagger.” At which point he threw up his hands, walked out, and said “Alright you fuckers, get out, I’ve got planning to do!”

Mine isn’t nearly as good, but I’ll share anyway. I joined an really evil party halfway into a campaign. My character was a ditzy catgirl DEX monk who thought her party members were the nicest people ever. (SO much fun to play!) The DM had it in for our characters by this point, especially the one druid who would *always* transform into a sexy whatever-species and seduce people to get his way.

So, we’re going towards this desert city to do… something (I forget) and the DM throws a super-high-level basilisk at us in an open attempt to get a TPK and end the campaign. And the druid crits his Animal Handling role and tames the damn thing. (Our DM was literally banging his head on the table at this point.)

We put a hood on the basilisk and a leash and brought it with us to the desert city. The inhabitants were scared shitless of us, and we basically took over without a fight. The DM calls the campaign there, saying we were now the new lords of Wherever.

Fast-forward a year, we’d all mostly forgotten about that campaign. We were playing a heroic party in the same campaign setting, and lo and behold we wind up at this same desert city, which is in the terrible, evil grip of our former characters. They’ve all gone absolutely mad with power and are truly OP (the GM basically took them all forward 10 levels and min-maxed the hell out of them).

So, through a series of deft plot events the DM splits us all up, and makes us each fight and kill our former character. Each fight was a whole game night unto itself, and nobody minded. I was playing another female DEX monk (this one an Aasimar), and I wound up in a truly epic, knock-down-drag-out kung-fu-chick fight across the rooftops of a bunch of temples. It was actually one of the best D&D experiences I’ve ever had. Several weeks, each night just a one-on-one fight, with the rest of the party just sitting there riveted in suspense, literally gasping at every dice roll.

So yeah. That’s a good DM. I think Rulette is in that league too, but time will tell.

Not as good? I dunno, I gotta say both stories are awesome! In the few PnP sessions I ever had, nothing even close to that cool happened.

best I had, our DM allowed us to make our characters whatever we wanted, and decided on wild magic/wand of wonder for any spell mistakes. So i had a Kender Mage. low lowwwww ability percents to make spells work, and none of the correct spell components, just stuff i’d…borrowed., and making things up as i went along.

we got to a small dungeon (well, small apparently, but deep), and i tried casting a fireball at an enemy with a cone of cold’s spell requirements. ended up with a giant snowball.
another caster-type in the team melted it with a fire spell, and the DM made a few rolls… ‘well, he says, we’ll take up a new game in a week, you two just drowned EVERY MONSTER in this dungeon.’
needless to say, we never got to play those characters again

I think the word you’re looking for is “unleashed.” :P

A trifling victory….but a victory nonetheless

Any combat you can walk away from …

Or you crawl, and if you cant crawl…well you know the rest.

Ahh, that feel from when one of your peeps nails it for the very first time.

Alternative title; How do you want to Blue this?

she totally blue that critter away

On twitter, Jackie talked about the upcoming film, Joker.
My view- I’m kind of wary about [the] Joker, too.

The [director?], Marin Scorsese is very good at films like: The Aviator, Taxi Driver, and The Godfather…[granted, the G. is not his film]. But, when he does other genres, then his films can fall flat.
If the Joker’s plot does something like- the Joker’s head is very crazy before we see him, and big, tragic events, and failures, make him go 100% nuts, like the plot of Macbeth, then I’ll probably like it. It it is too [spooky or disturbing], like the 1995 film, Screamers, then I’ll probably not go to see it. *shrugs*

My problem with the new Joker movie is basically a matter of iconic characterization. It’s one thing when an actor reads every single comic book and learns some of the lore about the character so they capture the essence of the Joker (he’s a pathological liar and a sociopath who is fixated on the Batman and creating absolutely chaos for personal gain). We know it can be done since we see other complicated comic characters get good treatment (like in the Dark Knight with Heath Ledger and the writing for the Joker).

Now my issue with an ORIGIN story of the Joker is … well, if you learned anything from Heath Ledger’s Joker, there isn’t one. He consistently changes the story. There really isn’t one canon, unified story about the Joker’s past. Was he a mobster? Was he a guy who pretended to be the Red Hood once for the mob? Was he a thug who was in the wrong place at the wrong time? Etc. All those examples were comic writer embellishment to tell a bigger story about the Joker in the present day. Not that anyone knows

Heck, I don’t even think the Joker knows anymore. In his state of mind and the fact that he is almost incapable of telling the truth when it comes to his past, I think the Joker really has no idea where he came from after lying so much. Which is why he’s a great villain – he has nothing that really ties him to a timeline or a past or anything. He’s a guy who is utterly crazy who can’t bear to operate without the Batman or Batpeople chasing him. He could basically be more than one guy handing off the mantle at some point, because there’s nothing that says that can’t happen.

On top of that, he’s also brilliant and has bouts of clarity that makes people feel for him as a character. He could be any one of us if we were to go insane.

Yeah. I like your ideas. :)
I agree with your idea, that Joker can be emotionally transparent, and [a sympathetic character], sometimes.

Such as- when the Joker loses his cool after his plastic surgery, in the film, Batman (1989), I get a feeling of: Wow. He’s really sad. It’s kind of horrible to watch him feel that.

I really like how you did today’s page, Jackie! :)
The colors, [and the shading?], give the drawings a fun, 3D look.

Has Jackie ever considered running a game?