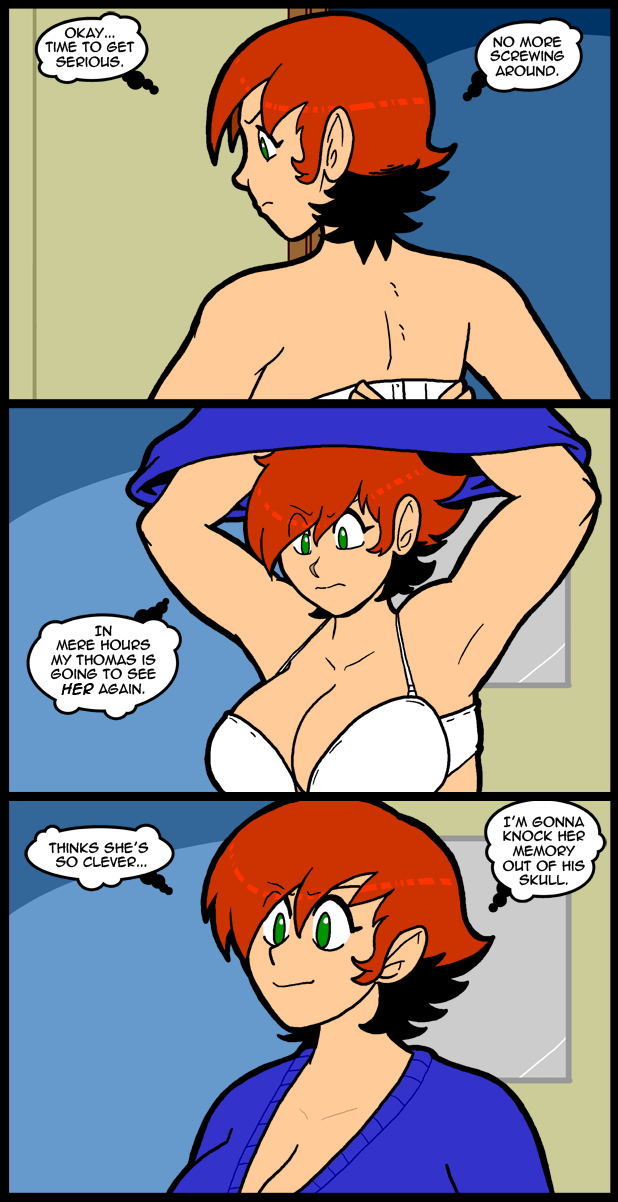 There’s really no doubt that as far as her relationship to Thomas is concerned Carol is all in. Once she decided they were going to be a thing she committed pretty forcefully. He is hers and that is that. After years of cat and mouse I think we can forgive her being so attached after a relatively short time as a couple.

I changed the color of her shirt a couple of times and I’m still not sure I like it. It looks different on every screen I view it on. Even more so than things usually look different between screens. It doesn’t really matter later on, but for just this page is kind of bothers me. Earlier today it seemed perfect, but now I think my eyes were affected by the sunset. I really don’t feel like fucking with it, and, like I said, it’s not even important later. >:| I’m just gonna leave it. I have other things that need doing.

Honestly, I don’t think this page needs to be here at all. In retrospect I think I should probably have cut this scene. I wasn’t sure when I started it, but I wasn’t so unsure that it kept me from spending the time to make it. Now I can’t bear for the work to be wasted and I need it to exist. No matter how far in advance you write you can keep second guessing right down to the absolute last microsecond. Doing the comic for so long has made me capable of accepting imperfection. It’s probably the most important thing I’ve learned. I mean, there’s a reason Jo makes her speech to John on page 584. It’s probably the best advice in the entire comic so far. Which is saying something since it’s full of little life hints. X3

Actually doing something is important. In lots of places in life. I mean, you can change your facebook profile pic to whatever the image is for the cause of the moment, but it does fuck all. Unless you get off your ass and do something the best you can hope to do is inform someone of the problem who is more likely to actually act. Pretty fucking sad. That said, you’ll rarely see me even changing my profile pic. Doesn’t mean I’m not gonna do anything. I just don’t feel the need to fuck up my brand for asspats. Of course, there’s also a good chance I won’t actually do anything, but I won’t be getting any ill deserved ass attentions either.

I like to pick my battles carefully. I try to do things in ways that suit my skillset and resources. This comic is easily the best thing I’ve ever done in my life. It’s the best way I have to try and educate, for lack of a better word, people lost out there, like I was. I didn’t have anyone, or anything, to look to for what I needed. I had to hash it out in the shit with the other dopes. Some things came close. Empire Records at least has a sort of hopeful message, more or less, but Clerks doesn’t really. In that respect I think Clerks 2 actually has a better overall message than the first one.

Royal Space Force: Wings Of Honneamise actually had a lot to do with helping me come to the message for Between Failures. I rarely talk about it as an inspiration because it’s way harder to explain than Empire Records, or Kevin Smith movies. It’s not as well known by a long shot. If you ever get a chance to watch it I think you’ll be able to feel how it affected my work. Especially the very first scene. It’s basically where Thomas’s internal dialog came from. Should you happen upon the film, try to watch it with subtitles. The dub doesn’t quite capture the apathy. They Americaned it too much. It won’t resonate the way it should. The subtitles are a little more vague and literal, and the voice acting better conveys the tone, even if you can’t understand the words. It’s a Gainax movie. That could entice you, or turn you away, depending on what bits of their catalog you’ve had inflicted upon you… For better or worse some people blame the failure of Wings Of Honneamise, and it was a failure financially, for the creation of Neon Genesis Evangelion. Alternately some people praise it for that. For my part I’m not sure which it should be. I think that Evangelion is kind of a hot mess, but the fact that everyone and their sister has seen it makes it useful for connecting to others.

For the record, if you just want to see Wings at all, the dub is free to view online legally. Two seconds on google will bring you two it. As I said, it won’t resonate properly, but it’s still pretty to look at, and you’ll get the gist of how it influenced Between Failures at least. If the sub is online I didn’t find it. If any of you want to take the time to become my friend you can come over and watch it sometime. I have the old, out of print, DVD.

briliant comic, indeed, tho im not sure what to expect from those words :o
something awesome, im sure xD

I’m getting the feeling that this mysterious ex that keeps getting thrown around, doesn’t remember Thomas, or doesn’t care at all. It seems like a lot of hooplah for nothing. Not that, I’m saying, is bad, it just feels like we’re building for a big showdown, when in her mind, she doesn’t care at all.

Seems unlikely since she specifically asked for Thomas to be present at her signing though, don’t you think? Logically she has to care at least that much.

Like it’s been stated already, she asked for him to be there…

My view is that sometimes, after a break up, you want to know you’ve made out better than the other person. Even more, you want that other person to know you made out better. Sometimes, it means you haven’t really moved on, and need the satisfaction. Just my two cents, I experienced a little something like it once, but maybe I don’t really know what i’m talking about.

I’ve always thought redheads looked good in green. Oh, and closure is important, too. But not as important as redheads.

Frankly I’m a little surprised that when you created Carol that you didn’t stick her in an orange sweater and glasses. lol

The purple looks good though. Or you could go all number-wang and switch it every panel like Carl did. hahaha.

Just wanted to say that I read the comic first page to here over two days and I find it brilliant. It might suck that all the work you put into it was read in such a short space of time, but I just… couldn’t… stop. I’ve already sent the link to half a dozen friends.

I haven’t read through the rest of the site yet to see if you continue the comic (fingers crossed), but thank you so much for the work. When I get the $$ I’m going to follow the Book link, and see where it takes me.

On a really nice connection a person can read the first 300 pages in 2 hours, so I’m used to the archives getting blown through pretty quick. XD I’m glad you enjoyed it enough to share. You have my gratitude.