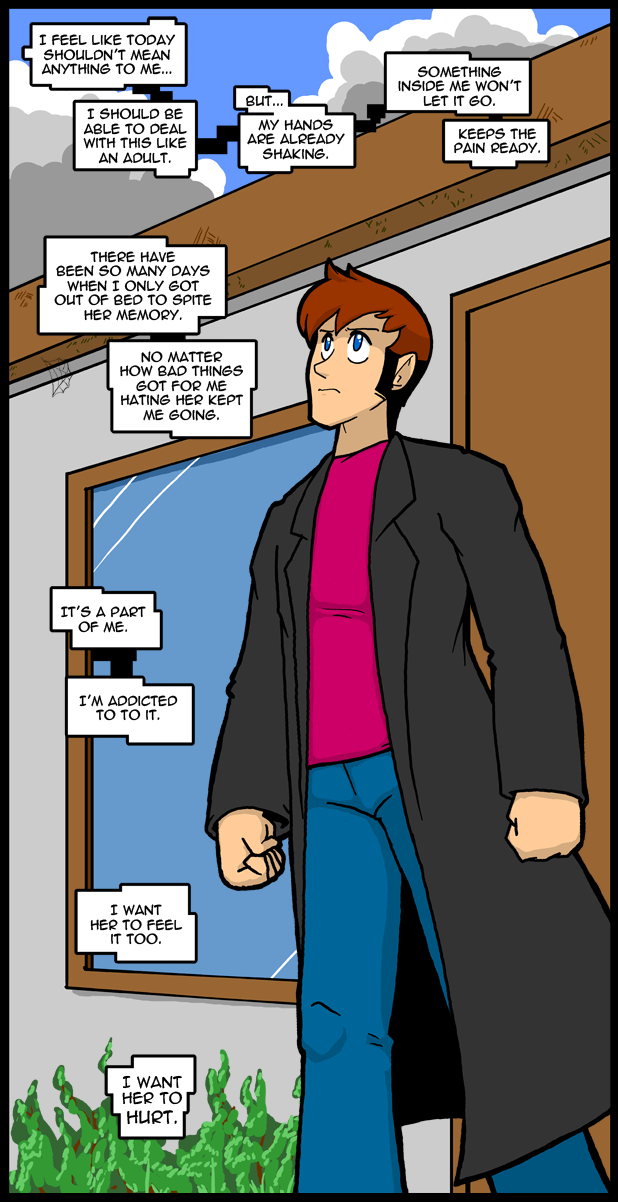 Just the other day someone was telling me that they would change the parts where you look inside Thomas’s head if they could change anything about the comic. Apparently it had no effect on me.

There are things about this whole arc that cast at best a poor light on Thomas, and at worst vilify him. He is young yet, and still has a vein of angry inside that he hasn’t come to terms with. His great disadvantage when placed before you is his mind being laid bare. That said, his actions aren’t likely to help anything either.

Of late the interface for loading the comic has been acting strange. the arrow keys, for example, do not function in the text box. There are other odd annoyances too. I don’t pretend to understand the why of it all, but it vexes me and I feel it should be blamed on persons other than myself.

My Scooby Doo calendar is also Velmaless this month of April. How I am to endure this trial is beyond me. Scooby Doo without Velma is barely worth casting an eye to. Maybe I should print out an appropriate Velma and paste her on…

For love of god! pull stick outta your ass tom beat the bitch with it!

Hah, yes that was me who said that. Didn’t mean it as a request, recommendation, or complaint, just as a comment on how I’d do it. If, for example, I wrote webcomics instead of being a student trying still programming his first publishable video game. But that would be a different webcomic that I’d write, and art is a difficult thing to truly call better or worse.

The first-person narration suits the tale you’re telling, stick with it. Sure, it feels a little uncomfortable, but its part of what this comic has become, and more importantly it adds to the work itself. Much like writing a book in 1st or 3rd person.

Sorry if it sounded anything like an attack on your work. If it makes us even I’ll send you a link in the next year or so to what I finish for you to pick apart! ^_^

But until that time I try to join you on the stage between failures, good luck to ya.

I didn’t take it as any of those things. I just thought it was funny since I was sitting there recalling that very device while reading your message.

Here’s the answer to your Velmaless month. First cut out an entire page from the previous month- which ever page has your favorite picture and you feel like you could live with seeing again, then superglue the edge to the center binding, thus completely covering the velmaless picture. This way Velma won’t just look out of place in a picture that she wasn’t intended to be in.

I am not now, never have been, and likely never will be a Scooby Doo fan. That said, Velma made the show worth watching (skinny sucks, and smart is sexy). A Velma-less calendar month, when the alternative is Velma-filled, is just too dismal to contemplate. Hmm… Miss April on the calendar over my desk is a Gray Wolf with gently amber eyes, sunset backlighting the fur of her ruff…

Better idea — why not create a Between Failures calendar to sell in your store? I know CafePress makes and sells them. Hey, I bought Ozy and Millie junk; I’d definitely buy yours. Brooksie, Carol and Nina would definitely be an improvement over carnivorous land mammals.

THIS! A Between Failures calendar would be awesome!

I should have wrote “the school teacher with a gambling problem” but in “Girls with Slingshots” there is a librarian….similar situation…bleed over…

Also, I lol’d at FSoG, its just so TERRIBLE. Like Twilight with Bondage Lawyers.

Incidentally, I failed at being a sub. Seems I have too much of an innate sense of sarcasm.

Never said there was anything wrong with it, but it does fall under the category of things you may not want your co-workers or the public at large to know.

dude, dont do it

Wow, it’s been so long since the last time I even spent a thought on Scoob & the Gang. I can’t even remember if Velma was the good looking one or ? The only names I can confidently pin to characters are ‘Scoob’ and ‘Raggy’. We always got a big charge out of Scooby-Doo being such a big fraidy-cat.

Fun ‘toon memories, along with Josie and the Pussycats, and Whacky Races. I always thought Penelope Pitstop was a cool character name.

I can’t quite tell if you’re just being a troll or if you’re really so oblivious that you can’t remember the names of some of the biggest most important cartoon characters in history who happen to be an integral part of just about everyone’s childhood.

Maybe it’s just because he has taste. All of the Scooby-Doo shows, with the possible exception of the new one, are just awful. Not that I didn’t watch them, tho. I watched them because they were usually on right after something that I actually wanted to watch.

I wanna say that comparing this to #2 is kinda awesome to see both your evolution in art and writing and Thomas’ evolution in terms of his strength of character and determination… or maybe it’s just a different face?

Either way, I’ve liked this since I first found it, and I feel like this is pretty damn awesome.

Ah, Velma. I’ll never understand anyone who says they like Daphne more.

If you can’t hurt her with your words, you can charge your playing cards with kinetic energy and blow up her car.