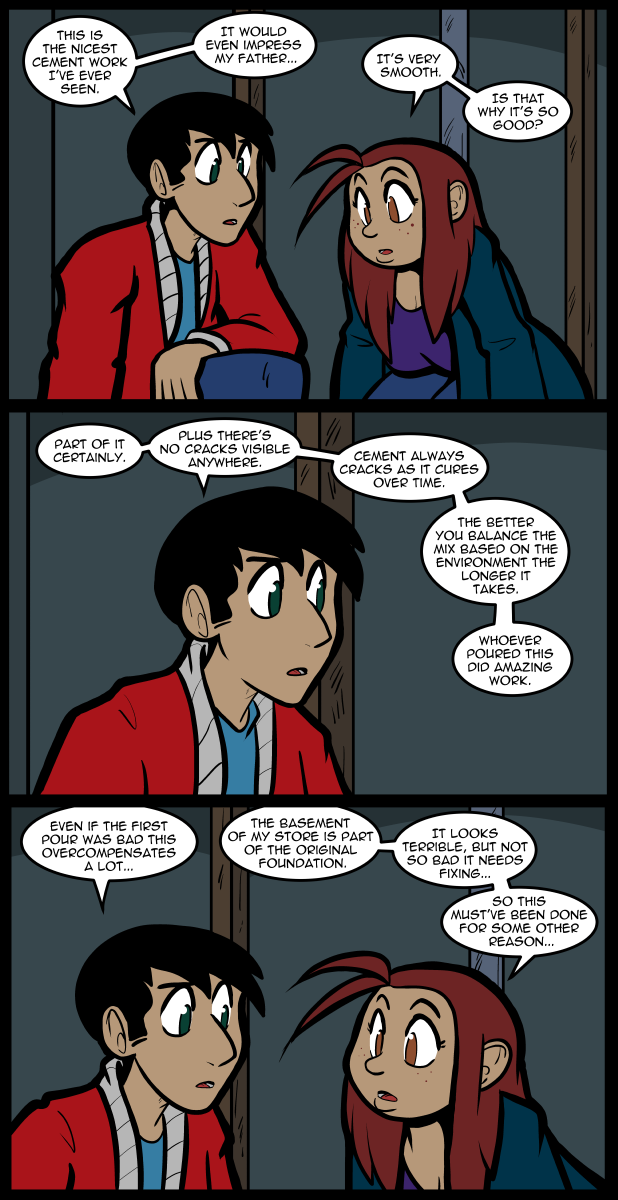 Cement & concrete are so much more complex than a layman realizes. I just barely scratched the surface of information about it & you’d be surprised how much goes into getting it right, doing it well, matching it to the environment. There’s theories & formulas, lost techniques people are always trying to rediscover. Reggies is speaking VERY broadly. Even saying concrete, or cement, doesn’t mean just one thing. Construction is one of those jobs that doesn’t get the respect it deserves because it’s manual labor, mostly done by men. The technicians are highly skilled at the top levels, doing the best work. It’s just like anything, there’s levels.

I’ve been thinking that since Xmas is a Wednesday that I might post the comic for that day on Thursday instead. There’s usually very little traffic that day. Although I’ll probably just post it like normal, just like every year even though I think about actually taking a day off. I can barely function if I don’t do the things I usually do when I usually do them. My person is so tied up into this comic that I don’t feel right unless it’s being taken care of above everything, including myself. I suppose that’s going to lead to regrets down the road, but at this point I’m never going to avoid regrets anyway. Mom has been taking care of my sister’s family almost the entire time of the last two months, so it’s just dad and I here. It gives life a feeling of every day being the same with reduced perception of the passage of time. When I realized Xmas was in 5 days my brain was like “I’m not sure that’s right…” I had to look at my calendar to make the reality of it sink in a bit. I guess it’s better this way since all the modern artifice of the holiday just makes me sad or angry anyway. On the internet no one is being kind to their fellow man. They just shout things at each other and try to ruin whoever says anything they don’t like.

Alas that these evil times should be mine.

There gonna find a body calling it :P

Well, it’s become “Chekov’s cement floor” now, so something must come of it! ;-)

I’m guessing it has something to do with those tunnels to the whorehouse. May or may not involve corpse(s).

There’s no such thing as “unskilled labor”, only under-valued skills

There actually is such a thing, but you’re quite correct in that the phrase is extremely overused and misapplied.

…..And those who make pancakes, without the proper instruments, are called-
unskilleted labor.

I’m always fascinated that it’s popular to deride the working class as low intellect drones. Nobody wants to live in the dark or shit in a hole, but somehow electricians and plumbers are not respectable people?

Even skilled labor people who work in factories are looked down upon. I’m a press brake operator, and I challenge anyone without the necessary training to even attempt to do the more technical aspects of my job aside from the button-pushing part (like setup and programming). Welders are even more skilled; one of my best friends is a welder, and he can pretty much write his own ticket due to the need for skilled welders out there. Yet SO many snooty creatures can’t get past the “Oh, you work in a FACTORY (eeewww!)” part.

I agree with what was said above. It’s true that many factories in the past were smelly, dirty and dangeous places to work. Read Upton Sinclare’s “the Jungle,” if this isn’t clear. Oh, wait, they still are. Copper refinery. Gah! Smells like sulphur. The guy who delivers my diesel fuel smells like,…huhn? Diesel? So high society turns their noses away.
But High society is too drunk to notice that they really don’t contibute anything but money, and if they weren’t there, the money they think is so valuable would just come from a different investor. They feel powerful because they could buy or sell my entire neighborhood. In fact it’s their money that can. It’s the money that has the power.
Know what happens when concrete gets poured? You wait. Inspectors are provided with three samples of product, they put it in a press and test the compression strength at 7 days after pouring, at 14 days and at 28 days. If it fails any of those tests, you havve to fix the he structure, tear it down or it cannot have people in it. Building inspectors are really important. Concrete is fascinating. Read about Roman concrete at Wikipedia. Why do we have to tear our concrete buildings down after 150 years, but the Roman viaducts are still carrying water?

That last point is mostly due to keeping oneself employed and selling product. Problems due to lack of maintenance, exposure to salt when not designed to be exposed to salt, and good ole graft.

Look at light bulbs.
The classic filament ones made early on are still going strong and only stop working due to accidents, whereas the last generation ones were made so shoddy they didn’t last the quoted lifespan.

Modern LED lamps? Same issue. Anyone working with LEDs knows they can last 100K hours or longer as long as you do not over drive or abuse them.

So what did the BIG companies do with the first generation besides delaying them to sell dangerous compact fluorescent bulbs? They over drove them to achieve high brightness withe the cheapest build. Those things ran HOT and barely lasted as long as a Walmart special.

Industrial lamps can get the full expected life because those guys buy more up front and punish manufacturers that don’t meet spec. Just running a LED lamp at 90% of it’s rated power multiplies it’s effective life ten fold or more.

I work in the industry, and mixing, placing and finishing concrete well are highly skilled occupations. If done right it can last forever, screw it up and it is expensive paste and gravel, and there are a lot of variables involved in the equation for a successful pour.

I think the spectacular endurance of ancient Roman concrete is because of the mineral composition of the volcanic sand they used. Top-grade materials in addition to unmatched skill.

I’m white-collar by nature, education, and avocation, but I’ve had enough experience with physical work to respect it very highly. I mean, shovel a driveway once and you learn to respect labor.

No kidding, I don’t want to be the one who services the sewage system, maintains the power lines, or hauls away the garbage, which means I highly appreciate those who are willing and able to do it. Same goes for people who serve food at restaurants. Why be a jerk to people when there’s no reason for it? I just don’t understand.

Skilled trades aren’t any easier or harder than admin jobs, just different. From my experience, the most prominent difference is a low tolerance for other people’s behavior. Machines follow specific rules, and most of them come with a manual that tells you what those rules are.

There may also be a certain amount of masochism and misanthropy involved, but the same could be postulated regarding sales, or human resources managers.

Returning to being serious for a moment, though, I have to admit that white-collar jobs are as necessary as blue-collar jobs. Most of the guys who weld or bend conduit, or mix concrete, have no interest in accounting, inventory control, purchasing, hiring, or any of the other adminstrative roles that have to be filled so that they have the tools and raw materials to do their jobs.

My co-workers and I are as rough on the admin staff as anybody else. But if we’re being fair and honest, both jobs would be in trouble without the other.

In spite of the fact that the passage of time, is quite possibly the most measured and most predictable thing in the universe, I am often caught off guard by it. I have been retired for over a decade and I now very seldom know even what month it is. Living in Canada, I can at least tell the difference between winter and summer, but that is about the level of my time keeping accuracy at this point.

Good for you. I only keep track of the days of the week so I know when to come to work and when to stay home.

Yea, I am in the same condition. I am frequently ambushed when holidays arrive, usually only realize that a day off is coming a day or so ahead.

These conversations put me in mind of one of my high school buddies. He is just a farm kid from Oklahoma but he is also “The Guy who Knows how to Make the Machines Run” at a large tire factory. He never went to college but gets sent all over the country to set up manufacturing machines or to figure out why they aren’t working. I’ve known the guy for over 40 years and only just found out that he was in the running for class valedictorian. I’ve made my living in a white collar field but I have known farmers, ranchers, mechanics and machinists who ranged from adequate to god-tier expert. Many of them were every bit as much deep thinkers as any of the college educated people I have known and worked with.

Blue collar job folks also tend to appreciate the simple things in life more than those who are monetarily wealthy, because they know the value of their labor and what it takes to keep the wheels of industry running.

This is why politicians fail at almost every turn: they make a career out of politics and have no other appreciable value from a labor standpoint. The original members of the US Congress all had businesses to run and understood the value of time and money far more than any of those who “serve” now.

Six years working as an on-demand laborer taught me who the most important people in an organization are: if the CEO of the company goes on a junket to Fiji for 6 weeks, maybe 6 people are affected. But if the guy who changes the toilet paper is sick for a day, the whole place comes to a screeching halt. So tell me who is most important? Who gets paid more?

And it just ain’t true that no one on the internet is being kind to their fellow man. Look right here at your own comments section.

I know- this is unasked-for info, from an internet guy who knows little about you, but-
In my opinion- Jackie, please don’t worry about your being an artist, + your art job, being your main focus.
IMO- as long as: you keep your body healthy, and do every you need for your daily life, + you have healthy friendships…um…with your friends, and you have a healthy friendship with yourself, I think your focus + activities are totally OK + healthy activities.

[ Oh, and also- Happy Holidays +/or Merry Christmas, and Happy New Year, to You Jackie! ]
:D