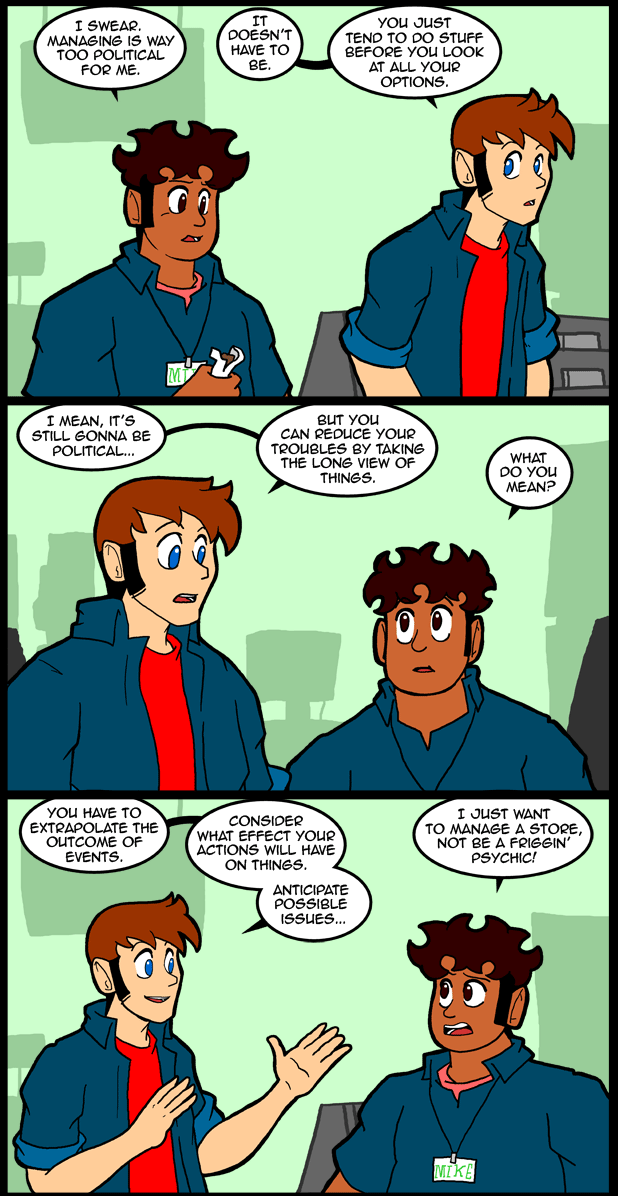 The weather’s supposed to get crappy tomorrow and the next day. I’m not fan of inclement weather, but not as much because of the conditions as how they cause people to LOSE THEIR SHIT. In bad weather people seem to forget how to operate their motorvehicles. It is intollerable. I worked in a strip mall at one point. The kind where you can just look out into the parking lot from anyplace in a store. When it would snow it was like having a window to stupidity. If the snow got very deep the mall would spring for a bulldozer, or what have you, to move the snow into piles. Which was good because people would drive their low riding sedans into drifts and get stuck if they didn’t. Of course this led to the uncovered snow melting and refreezing into black ice over the course of an afternoon, so the view became half America’s funniest home videos and half real stories of the highway patrol. One day I watched someone very nearly get run over because they stepped on to the ice, fell down, and then an oncoming car couldn’t stop. Of course if they hadn’t been able to slide away they could have just put their feet out and let the force of the car hockey them to safety. I watched a car speeding across the lot hit a parking stopper because they forgot they were under the snow presumably. It kept on going after it bounced up, but you could see a trail of fluids even from as far awat as I was. It clearly cracked something. Not something important enough to stop them fromm speeding, but I bet they had to get the thing serviced in short order. Couldn’t tell you how many minor dings I saw.
I try to stay home if at all possible if the weather is bad. About the only way to go anyplace out here is dirt roads or highway. On dirt roads you get stuck and on the highway people drive like they want to die.

Did I tell you guys I managed to fix that broken portal of power I got with Skylanders Giants 3DS? I had to soldner a wire back to the board, which I’d never done before, but it worked out okay. Now it functions more or less properly. I found a $5 soldering iron so it’s not like it was a lot of added expense and, in theory, I can use it to fix other stuff too. There have certainly been many occasions where I thought I could fix something with a little hot metal, but none was available. Besides, if a thing’s already broken there’s no harm in at least trying to repair it yourself. It’s not like you’re going to make it that much more broken.

I watched several how to videos before I started. The net is pretty handy if you want to learn simple repairs anymore. I took my DS completely apart and fixed a shoulder button after watching a video on youtube. It worked better after I messed with it then it did the day I got it… Wich is kind of sad. There was one scary part where I had to dislodge a wire from the connector. the video said it could be stuck on really tight and cause a problem, but mine practically fell out. Which makes me wonder if that was part of the problem all along. It didn’t seem to be seated well at all. Anyway, I’m sure I talked about that already. I didn’t even need my special screwdrivers to open the DS. I guess they went with regular screws for some reason. Maybe they finally just gave up on trying to keep people from moddin their shit.

Of course, all I have backing me up on this is the experience on hearing from dozens of people who didn’t need to drive complaining about how bad it is/was every year since I was three.

Good on you fixing your own stuff! If more people were willing to learn as you are, the world would be a much better place.

Also, this comic is one I love… It always bothers me when people don’t think about their actions and the like, and then they wonder why the world is falling apart…

I grew up where it snows every winter. Either you learn to drive in the snow or you have to sit in your house all winter unemployed and starving to death. Unfortunately we had a fair number of people – especially college students – from places where snow was uncommon who had no idea how to deal with it. The first snow of the season the tow trucks would be working double shifts to keep up with the people who slid off the road or rear ended someone or got stuck in a snow bank, etc. etc. etc. To me it wasn’t a matter of having an excuse to complain about how bad the road were – it was just a matter of “I want to go from here to there and oh, by the way the roads are snowy and slick so I’d better go into driving-in-the-snow mode so I don’t have an accident.” One kind of weather that DOES keep me in the house unless I have no choice is ice storms. I encountered my first one in Michigan one winter and then not again until I moved to the south-east. NO ONE drives well during or after an ice storm. Experience can’t compensate. There are no techniques for compensating. When all the surfaces are covered with an inch of ice they are completely unpredictable. Snow is one thing – ice is another.

Meh, I’ve driven a Ford Econoline through an ice storm. Opposite-locking through town in a full-size van is, um, interesting.
Where I live, we get snow often enough you’d really think people would know how to handle it. And yet, every year, at least the first snow fall of the year, I can’t seem to drive to work without seeing at least two or three monkeys in the ditch or the interstate median. Worst part? They’re almost always AWD SUVs. I just giggle in vicious schadenfreude as I cruise on by in my tiny RWD convertible.

*what effect your actions

For someone who claims to know his limits, Thomas seems to be way better at this job than Mike…

We had a terrible blizzard here a few years back. The weathermen predicted a terrible blizzard, so it was a huge surprise. I got stuck on the way home from work (should never have gone), and called a friend to see if he could come pull me out. He replied that he’d love to if he wasn’t also stuck. He was stuck there for three days. Everybody knew where he was. Talked to him several times before the phone service went out. (land line and cell phones) A farmer pulled me out with a tractor. I got stuck again about a hundred yards from the house, walked in and managed to stick my 4 wheel drive pickup, my diesel, and a 930 Case tractor in short order. We were snowed in for three days with no electricity for most of that time until they cleared the roads with D9 bulldozers. Ever been snowed in for three days with two other people who smoke who run out of cigarettes? Ever seen the Shining? When the dozer pulls out your 4×4 you WILL go to town for cigarettes. My friend made it through, his diesel pickup was able to idle for two days, and he walked out on the third to the nearest house which was over a mile away. (Might as well been as far as the moon during the worst of the blizzard)

It sounds like where you lived people were not used to blizzards. Where did you live at the time?

I mus say that’s some real talent to get all those vehicles stuck. What tricks did the farmer who pulled you out know that you didn’t?

Glad to hear that your friend had the presence of mind not to go wandering blindly around in the middle of the blizzard. People die that way.

Well, we’re not used to blizzards that leave 15 foot drifts in places and where the National Guard is called out (and can’t do a thing on the ground until the dozers go through-it had to back up and scrape some more so the Hummer could get through). Was pretty neat watching the Skikorski (spelling?) heavy lifters flying around dropping hay to cattle-that they mostly couldn’t reach till the snow melted. The last blizzard like it was fifty years ago, and probably thousands of cattle died piled up against the fences. And if my friend was very bright he would never have gone out anyway.(Just like me) You could walk over some of the old grain trucks around here for weeks.

You have to give it to Mike, that Thomas does make it sound hella complicated.