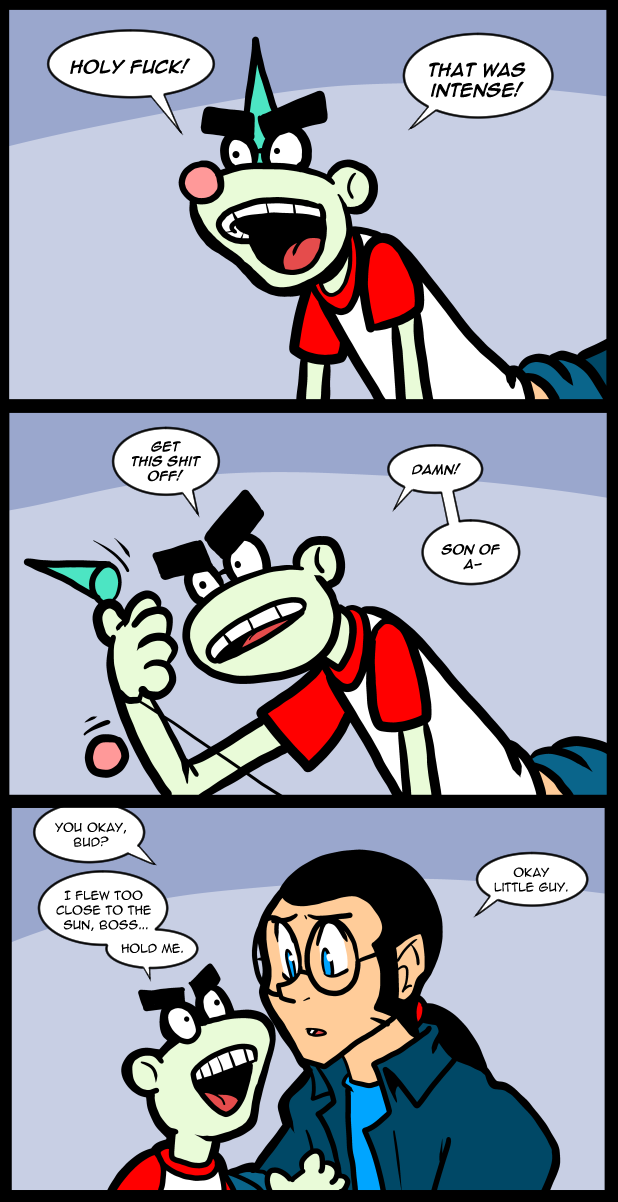 Ronathan is one of my favorite creations ever. He’s such a weird little gremlin. Bouncing from aggressive to loving on a dime. Maybe there’s a little too much of me in him. XD Eventually we’re going to go back to regular stuff about the normal cast, but I think it’s basically decided that Ed and Mike are going to make puppet content as part of Jessica’s internet plans. And who could say no? I would watch these two do stuff with Ronathan and Donathan even if I wasn’t making it myself. That said I’m not going to suddenly QC my comic and make everything suddenly be about puppets. It’s just something that’s gonna be in the mix from time to time.

Anyway, if you like my work, and want to support it, please refer to the links above. Maybe someday I’ll find someone to make a real set of Ron & Don with the money I get. XD

Puppets have been making a comeback on the internet. Either that or my algorithm has been directing more and more puppet material my way on youtube.

There is a good Twitch channel for that: http://twitch.tv/robotco_op

The guy who runs it goofs on video games with his robo-puppets and some of the stuff they do is downright hysterical. :D

What does it mean to “QC” (“quality control”? probably not…) your comic?

To deviate from the heart of the work to the point that is detrimental.

I think QC stems from Questionable Content going off the rails so much that it destroys the comic’s popularity.

Seriously? The absolutely brilliant webcomic I’ve been reading for nearly 20 years now and is still the first thing I read every morning?
Nah. It’s as great as ever. If it had stuck to the original formula it would have been boring by now.

I agree. If I’d found that comic before robots became more common in the story, I might not have stuck around.

Calling it brilliant is a bit of a stretch.
Pandering to the lowest common patreon is probably more accurate

It’s not wrong to show awareness of the downside to that concept, whether or not the upshot outweighs it.

Out of curiousity. If Ron and Don had an animated show who would be your ideal voice actors? Provided money wasn’t an issue and we could revive the dead in case said choice was already deceased.

Myq Kaplan for Ron and Markiplyer for Don.

Huh didn’t think about Kaplan. And yeah I can see Mark voicing Don. Now we just need to get him to say “Felt Job”

With current or near-future AI, we migbt be able to revive voice-actors’ voices.

And this is the point where Hollywood star stop being a thing.

My hwadcanon is that in addition to Jessica and her “sins” someone let go a fart*. The cumulative effect brought him here.

(*Take a now, the reader who predicted that.]

Oh my God, these two are so precious!

Just wait till Nina learns of this. Dude’s getting a Ring.

As is often the case, the puppet gets to drop the f-bombs and other blue language. I don’t remember Ed talking like this. Good on him.
Crestlinger may be onto something – Nina will adore this side of Ed.

Did you ever watch Glove & Boots?

I’m not familiar with it.