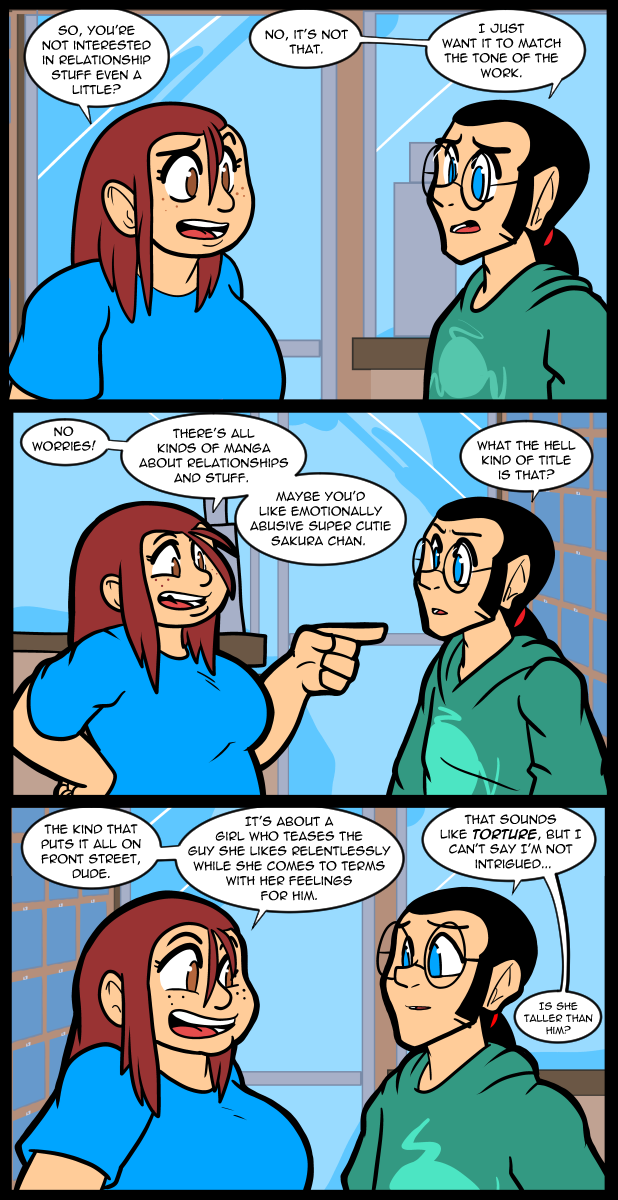 Being sick with an endless cough & passively looking after a doddering old coot is not a way to spend a week that I would recommend. I was so out of it one day that I gave grandpa all his pills in reverse order. It didn’t seem to have any effect on him, but in the evening when I realized what I’d been doing it was like “Well, I guess I may as well finish out the day backwards.”

I’ve only forgotten his pills once. I set the noon ones out to give him after lunch and just totally forgot about them. It was time for the next ones by the time I realized I’d never handed them to him, so I just skipped them. I don’t know what would happen if they got doubled up so I decided not to risk it.

I’ve been having an extremely hard time getting up in the morning to feed him & start the day. It can take up to 30 minutes to muster the energy to get up off the floor. The strength just isn’t there & it takes a while to spin my insides up enough to get the job done. I feel weak. Tired I’m used to, but weak is something different.

I also took a chance on some food that was a little older than I would normally try. It was a mistake. When my body decided it had to be removed it was quite a draining experience. Literally and metaphorically.

If every cold and flu from now on is going to be a rough as this I think it might just be time for humanity to pack it in. We fucked around too long and now we’ve got mega viruses that won’t be put off with a glass of OJ and some supportive words. Or possibly it’s just me who has gotten to old to shake off a bug like I did in my youth. Either way checkout time is coming for some or all of us.

I’d really like to get back to the actual story I want to tell instead of this random stuff, but the energy jut isn’t there with the sickness & half assedly making sure grandpa doesn’t die. I don’t understand how he can tolerate existing in the state he’s in. Maybe it’s just that he’s impaired so much it doesn’t register, but if it were me I’d be flinging myself down every flight of stairs I came across. I’ve just got a tough cold and I’ve been looking longingly at the basement stairs when I go to get cans of soup.

I have felt like I’ve been at my absolute limit several times this year, even before this year really, and yet I never quite seem to actually hit it. There’s always a little more limit. How long is the health bar? How much HP do I actually have? I don’t know, but I sure would like a potion before I need a phoenix down.

There’s a chance that things could get even worse in another week. I don’t even like to think about it, but even when I just skirt the edges I know it’s a possibility. One that no one in my family is ready for. I think that might be the actual limit for more than one of us. Maybe all of us.

I would like to think that when my time comes I’ll be able to embrace it with some dignity, but I haven’t done anything else in my life with much dignity, so I don’t know why my death would be any different. I guess it’s just a hope. Maybe my last words will be cool at least. It’s a low bar but a lot of people crash under it.

Anyway, I guess we’re starting another week, in another month, and the future will be what it will be. It’s not promised to any of us.

I know being sick is no fun though, so i’d definitely share a Remedy to remove any negative status effects if i had one, even it does mean the end of this Sick Forever series that is surprisingly enjoyable.

Whether it’s a feeling of obligation or just your personal desire to avoid creating a bad habit of neglecting the comic whenever you feel demotivated, thank you for continuing to entertain all of us anyway.

As much as i like other comics, this one is the one i look forward to the most every week, so thank you again.

Full title in English: _Don’t Toy With Me, Miss Nagatoro_

I watched that and enjoyed most of it. The first episode, I almost gave up on it… Nagatoro teases the main character so hard he starts crying in front of her and it was hard for me to watch.

But if you stick with the show, it becomes clear that she actually does like him and is doing the thing where you are too shy to give positive attention to the one you like and instead give negative attention. (One of my favorite moments… the main character sees a guy trying to hit on her, and he’s just waiting for her to start belittling this guy. He knows from first-hand experience how sharp her tongue can be. And… she doesn’t. Instead she just treats the guy like he doesn’t exist. Like the guy doesn’t matter, she couldn’t care less about him. And I think that this helped the main character figure out that maybe she does like him.)

“Don’t Toy With Me, Miss Nagatoro”

Interesting. I’m reading the manga version titled: Please don’t bully me, Nagatoro. It does start of rough but her body language antics (noodle arms) and facial expressions (those suspicious eyes, lol) really bring out some laughs. The art club President must be an expressionist, lol. And her younger sister/cousin..? is pretty much the same. Both are rooting for male and female protagonists to get together and won’t let anyone else interfere.

Not expressionist ya dumb spellcheck “exhibitionist”! God, this program…

I immediately recognized that one as well. However I am reading the Manga, not watching the Anime, so I don’t know how closely they follow each other.

try my dress up darling, dude
so emo

komi-chan can’t communicate is good too, but more in a crazy fun way

uzaki-chan wants to hang out too

they all have a common point tho, it’s kind of torture seeing that love story develop while they’re beating around the bush forever, thankfully they DO get together (and they we move on to how they manage to live together it’s also fun)

If you want a good emotional journey without the torture bit, “Shikimori’s Not Just A Cutie” just finished its first season English dub. Not sure if there will be more. Based on a manga, not sure if it’s exactly the same name. Cute AF.

From that last panel, it sounds like what he is really looking for is Lovely Complex.

For real trauma…MONOGATARI. Trauma e or-reseed as supernatural overlays. The poor bloody protagonist ends up with a girlfriend by becoming her therapist and spiritual guide. And then has yo do the same thing for one girl after another.

It might mean something, it might not, but I’ll be praying for ya dude. If some things line up I’ll try to up my Patreon pledge too.

I know what the elder care game looks like, and it’s not great if you don’t have a lot of support. Longest 6 months of my life.

I have heard good things about all these shows and will put them on my (ever expanding) list.

“Is she taller than him?”. Really? REALLY?

Hopefully someone will fill Nina in about this one. Hijinks will then ensue.

And don’t worry about being sick, man. Think most of us are enjoy the random stuff just fine, so you can focus on what you need to knowing we’re perfectly content with this stuff.

I think it’s safe to say that Ed has a thing for tall girls, specifically Nina!

Those two really need to make it official!

Why do I get the feeling that’s a crack towards Sakura Haruno from the “Naruto” series? She was both physically and emotionally abusive towards Naruto for the most part, although she was just average in terms of looks and she was thirsty for the dark rival character who tried to kill her once or twice.

Hey. I don’t talk here much, but I’ve been reading the comic and paying in for a while now.

And… I’m rooting for you.
Hang in there.

I got sick with covid about 2 weeks ago and I still have lingering symptoms I am tired all the time and I am still a bit shaky and week. My husband was able to shake it off mostly with in a week but he has the immune system of a rhino. I am sorry you are still not feeling well and I hope you get better soon. I think every one understands if you need to take it easy or take a break. You need to rest and heal up.

It took me a month or two to get back to the intellectual ability I had before covid. Still chronically tired, though, months later. And I feel like my attention deficit has gotten worse. That’s an effect I haven’t seen reported.

I think the random stuff adds some depth, so don’t worry about it.

Worry and desire are quite different.

“Maybe my last words will be cool at least. It’s a low bar but a lot of people crash under it.”

I haven’t figured out anything cool myself, but I hope there is still some more time.

Most memorable: “They couldn’t hit an elephant at this dist”

J.W. Goethe (eerie): “More light! More light!” Though some killjoys ascribe him a very mundane variant of this.

Wikipedia has a long, idiosyncratic list of last words: https://en.wikipedia.org/wiki/List_of_last_words

You could reuse “Bring me a glass of Champagne.” (I kind of like that one.)
Or perhaps “May God grant me these last wishes—peace and prosperity for Brazil.”

Then again, Jackie in particular could always go for “Tell my readers that this is how Between Failures ends.”

I just want you to know I literally laughed out loud at “Is she taller than him?”
Thank you for your work.