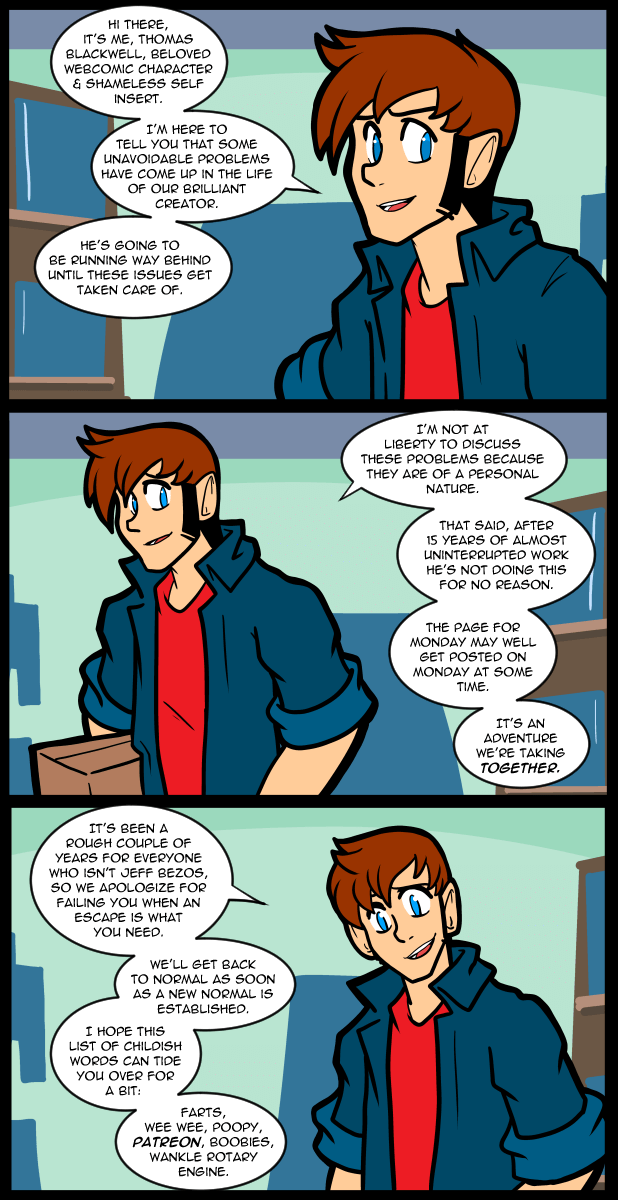 The comic says pretty much everything. I’m dealing with an abnormal level of life events & can’t keep up with it all. At the moment I’m running on about an hour of real bad sleep. That said, I think I can get the actual page up on Monday at some time. It quite literally pains me to have failed you in this way. I know it’s the kind of thing that people say to gain sympathy, but in this case it is the god’s honest truth. I take this comic more seriously than I probably should, but it’s the only thing I have in the world that I made myself, & that’s important to me. Hopefully I’ll get through all of this with limited losses & come out the other side wiser for the experience. At the end of the day though I’m not Superman. Sometimes, even if those times come decades apart, I’m going to fail. But I won’t fail to mention Patreon & subscribestar, because I’m number one at sales tactics. In this room at least.

I actually threw the comic together because most people won’t read the blog otherwise. This will probably be one of the only times where almost everyone will at least take a look to see what’s going on. So, hey, people who’ve never seen me talking down here. I’m glad you’ve enjoyed my work enough to care about what’s going on. I appreciate it.

Anyway, I’m not sure how to tackle the next few hours. I’m drinking gallons of cope juice and making my way as best I can. See you on the other side.

I’ve been meaning to post for sometime. I used to work for a mediplay, a big box book/Music/Video store, about 25 years ago. Thank you for bringing back some many wonderful memories. I swear I worked with half the cast. Take care of Yourself. I’ll be here when you get back.

You’re doing a lot better than a lot of other comics out there.

Been reading for a couple of years now after finding the site and reading the archives. I love your work.

Take time to regroup and catch some sleep. Live, live and health need to come first, the comic can wait.

We’ll be here when you return.

Focus on YOU Jackie. You have now already given us a comic for today, the week, september, year or decade as you need.

Do your thing. We’re here.

Best wishes, take all the time you need

Hey Life happens!
Take care of yourself and get some rest.
It is no good getting yourself sick.
And thank you for all the enjoyment over the years

Hey, take all the time you need! Thank you for the years of enjoyment you’ve provided to myself and many others! We’ll be waiting on your return!

You have had years of consistent updates – you gotta take care of your mental health and take a break! Not just to handle life being shitty to you, but also to just relax and refresh. Anyone who doesn’t understand that can kick rocks. I hope everything resolves as peacefully and painlessly as possible.

… this was supposed to be an independent comment, not a reply
xD

Take all the time you need Jackie and don’t let anything make you feel like that’s a bad thing. Your health, physical, mental and emotional, is more important than a damn deadline. If it takes you a few hours, a few days, or even a few weeks to get the next issue up, that’s just what it’s gonna take. Putting the next page up late is a damn sight better than not being able to put one up at all.

I’m embarrassed this is the first thing I’m saying to you, and in an obvious time of difficulty. But I adore your work, it brings me joy, and makes me look forward to Monday/Wednesday/Friday. If you’ll forgive an unsolicited opinion from a fan, what do you possibly have to apologize for? You’ve gifted us (me) with your work and creativity while asking nothing in return. I wish you the absolute best and very much hope for the best possible outcome with whatever you’re dealing with.
Many thanks,
Pat

Take all the time you need!

Been reading for years, I’ll be here for when you get back on top of things. Take your time. You got this.

Please take care of YOU. This is not our life, but we love it and as such, will be here when you return.

A fan for some time now, Speedy Mercer

I’ve been a reader for a while now and am a Patron from Patreon. Stating that just so you know and to encourage any who can afford to chip in to do so. You’re worth it. I’ll be here when you get back and will continue to contribute, however long you need. Take care of yourself and know that you will be missed. See you on the other side.

“Will be getting back to normal once we’ve decided what ‘normal’ is anyway…”
-Trillian, Hitchiker’s Guide to the Galaxy (radio play)

I trust your judgement. It’s serious. Take care of it, Jackie.

I’ve been reading since 2015.I can’t thank you enough for this wonderful comic. Take all the time that you need. Your wellbeing always comes first.

If you don’t take care of yourself we’re all going to have to deal with a much more serious withdrawal than this momentary seperation. So, as everyone before me has said, take care of yourself and we’ll be here when you’ve got things under control and had some decent sleep!! This Patron isn’t going anywhere. I’m more than willing to read the archives in the meantime because you have some amazing content waiting for us there!!

Been reading a long while, so long I don’t even remember how I found your comic and never thought too much to post here. I only sometimes check this section.

You take care of the stuff you have to take care of. Don’t rush yourself or feel guilty. You haven’t failed anyone. You’ve been consistent for all the years I’ve been reading. Life gets in the way sometimes. I’ll be here waiting patiently for more!

Hey Jackie; I’m currently in 67057, wouldn’t mind meeting up with you

Well, I’ve been in Colorado for many years now, so you’re not as close as it might seem. XD

Fine then….
I’ll be driving through Colorado Wednesday, I think.
Have to go back and get another load

Please buy Jackie a meal! I’m not close enough to cook one. And if you’re both willing, post a checkin here and let us know how Jackie is doing/can be supported in addition to Patreon.

Take care of yourself. Without you, the world would be just a bit dimmer and quite frankly, we need your sunshine.

Jackie, at risk of being too blunt, if I have to choose between a great webcomic and your health, I’m choosing your health every time. Take whatever time you need to deal with what you’ve got to; we’ll all be waiting patiently once you’re good and ready to come back.

I’m not sure if I would go with shameless, you’re pretty open with it.

And that’s a good thing!

Take care of yourself first, it’s hard but necessary

Take care of yourself, we’ll wait.

X2. Take what time you need. We’ll be here when you get back.

It’s not a failure if you can walk out the other door in the room where misfortune is found. It’s okay to sit in that comfy chair next to a warming fire watching the rain battering the windows with a glass of relaxation and take a breather.

Shout out to Monty Python in the closing words, most excellent. Take your time, hope to pick up again when you’re done with business. Be well.

Dude, been reading you for years. take all the time you want! I’m definitely waiting for when you come back. Take care of yourself.

Take your time Jackie. I’ll be praying for you! See you soon!

No worries, take care of yourself. Thank You for all the work you have been doing to bring us some entertainment.

Well normally I’d say to take time for life first, but I suppose with so much of you bound up in the comic that it hurts to take the break I’ll instead just pray that whatever called you away from it is resolved quick enough that you can get back to it in a timely fashion. There’s something special about your brand of down to earth normalcy that brings this comic to life, and makes life enjoyable for the audience. So as far as it being “the only thing you have in this world that you made yourself”, it’s certainly a legacy to be proud of.

I have well and truly enjoyed and appreciated the comic over the years. Life happens, take whatever time you need. I do hope things resolve well for you.

Take good care of your health and may the unfortunate tides pass by like a bad dream.
I will wait for your hopeful return.

Your letting your audience know why this is happening, goes a long ways to our understanding.

Life happens, and often, it knocks the crap out of us.

Do what you need to and take care of yourself, we’ll wait…

Hope things blow over soon, wishing you the best.

Wankel Rotary Engines: Still being developed!
Here’s something in the 1400HP range to Wankel about:

Seriously, get some sleep and once you have things more or less in order then get back to telling us a story. We can handle a wait. We have the entire internet and our own lives to deal with. We will be cheerfully checking for you next update whenever it arrives. All we ask is that you make sure to remember to tell us when you need to take a break. No updates and utter silence is what webcomic fans have trouble with. You have not ever done that from what I can remember and we are grateful for it.

I’m now a Patreon backer. I invite many others to join me.

Take your time, bro. We’ll be here when you get back.

Take some time, man; you’ve more than earned it. We’ll be here when things calm down.

Hope life gets better for you, been working retail for sometime and I can say you’ve made a great comic and I’ll always be waiting for the next page even if I don’t comment much.

Please, please, please, focus on getting past what you’re going through. We love your work, and we want you to be well. Don’t worry about getting behind, we’ll be here when you’re back. I’ve been a Patreon subscriber for years now, that certainly isn’t going to stop now when you might need it the most. Best wishes.

You had me at ‘Wankel Rotary Engine.’

Hope you get better soon. Take all the time you need.

Hey. Dude. You’re not a failure on any real meaningful level. You make something relatable that people enjoy and you get to have people engage with you on.

Hoping things improve for you sooner rather than later.

Hee Hee, He said, Wankle Rotary Engine.
He is a naughty boy, he is.

Apologies for being away from the strip for so [bleeep] long.