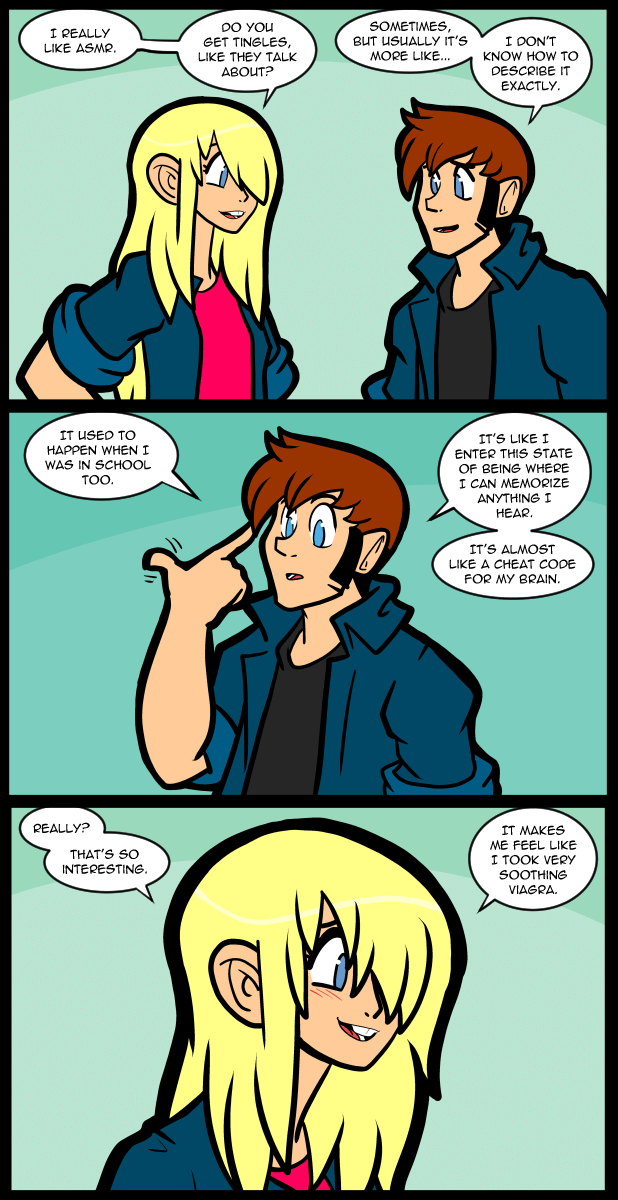 I’ve talked about ASMR in the blog before. This is basically me expressing two different reactions to ASMR that I have. Which is fine, since Nina is as much a version of me as Thomas is deep down. ASMR as a concept isn’t just one thing any more. No more than furries are just one kind of person. It’s the insane spectrum that humanity brings to absolutely everything. From saints to serial killers. I’ve enjoyed several ASMR creators over the years. intentional and unintentional. Gentle Whispering is probably my longest enjoyed channel. I’ve seen her evolution form immigrant to American, maiden to mother, and beyond. My most recent favorite is Reiki With Anna. She’s an nutty lady who waves stones around like magic is real, but I don’t care. Even if magic isn’t real the calming sensations are. She’s very mindful of inclusivity of belief, so even though I think it’s mostly mumbo jumbo she always makes a point to welcome people who think that, which is a kind of inclusivity that is much more genuine than what has become popular. She has an actual ASMR roleplay channel, but it doesn’t work for me as well as the magical rock wiggling. That said, her roleplay videos are extremely high quality. Like, I think she could be an actress if she didn’t want to waggle rocks at people on youtube. I’m glad she likes to waggle rocks though. I have come to learn the value of kind people who waggle rocks.
There’s a German lady I listen to sometimes who only does the pg stuff as a gateway to her sexual content. She always says “Hello, its me. Amy.” But I can’t think of her channel name… ASMR Amy. Of course. I like Valeria ASMR sometimes. The only male voices that works for me is a guy named Dimitri & Bob Ross. Slight Sounds is the second newest channel I like a lot. Anyway, I have to do something now, so I’m going to stop editing this post.

It’s been a really long time since I’ve felt so terrible for so long. In some ways the familiarity of the misery makes it easier to deal with because I know it didn’t manage to kill me before. Of course my quality of life was severely reduced, but win some lose some, I guess. These last couple of weeks have been like 2020 on crack. The really scary thing about that is that I sense that this isn’t even close to as bad as it can get. This is life just kind of dangling the absolute maximum level of misery in front of me me & going “Hey, check this out. I could do this if I wanted to. Wanna see me do it?” In this scenario life sounds like that kid in school that always had fireworks all year round & died at 19 while showing off on a carnival ride.

I spent half an hour this morning just sobbing with worry. Big, snot nosed, ugly, Kevin Smith sobbing. The kind of emotional outburst that makes a woman break up with you for being a huge pussy. I didn’t feel better when I stopped. It was just over and everything was exactly as bad as it was when I started. If it’s like this for me it has to be worse for everyone else & the only thing I can do to help is just shut up an endure. So that’s what I’m going to do. Endure & wait to see what the new normal is going to be.

I hate that you’re suffering, and I hope life quits kicking you in the balls soon. I hope things get better for you, and I hope you endure. Thank you for everything you do.

I wish I could say I feel your pain, but I do t know what your going through right now, I just want you to know that there are a lot of us out here who really do care. I don’t know where you are, what your doing, or what has brought you to this point in your life, but if you need to talk, if you just need to vent, or reminisce, hell if you just want to hang.

We are here for you. You’ve given so many of us brighter moments in our darkest hours, let us be there for you like you have been there for us.

Never forget your not alone.

Hey man. If this mess has beaten anything into me, it’s this:

Trite? Sure, a bit. But it’s true. You don’t have to suck it up and endure it in silence. Being a wreck because of all this is a perfectly reasonable and understandable response.

If you aren’t already, talk to someone. It helps.

Meanwhile to me ASMR feels like someone has taken some ice-cold knifes to the top of my head and is gradually waking them down the back of my skull and into my spine. It is just about the most painful thing I have ever experienced in my life, and that includes the time I got trapped in a burning building and barely made it out alive.

I am told this is not what ASMR is supposed to feel like.

That is certainly not what ASMR is supposed to feel like, though that is what the progression is supposed to be (start at top of head and move down the spine). I’m curious and unsure of how it’s manifesting as it is, but if it brings you pain then definitely avoid the genre like the plague.

Lulu, you’re not alone in having ASMR cause you to react in the exact opposite way it’s supposed to have you react.

What it makes me feel is like I’m walking through enemy territory with an empty firearm and a broken knife … and I can hear the trees whispering.

Yeah, just another thing the quacks at the VA lose sleep and hair over in regards to me.

ASMR reminds me of how it feels like I’m about to get a headache from the sounds, so I always have to stop before I get an actual headache…

Soothing Viagra? Does that give you a boner that somehow relaxes you?

What a limited world you must live in.

*snort!*
It’s just my view, but- [guys] talking about their need of viagra, or any other meds from their mundane-looking bathrooms,…holds (very little) interest, with me.

That’s a big surprise, I suppose?
*does a mischievous chuckle*

Well, come to think of it- please disregard my comment, above.
Sorry about that.
My family has had some bad news, recently.
Arguing or doing odd comments on the web, isn’t something that is helpful to me at the moment.
Please pardon my odd behavior.
Cheers, TRA

Come to think of it:
We [all] live in a pretty limited world.
Strive an accomplish things, if you so desire, (that’s good).
But jumping has its limits, and it won’t get my little sister over to Hong Kong.

As a recent discoverer of asmr, I personally enjoy the ambient environment ones. Why sleep in a silent room, when you can be asleep in a treehouse above a jungle populated by dinosaurs, or leaning back in the seat of a spacecraft as it hums through hyperspace. Rain and fireplaces are nice too. One of my recurring favorites is an underwater bedroom. Hums and bubbles, but it gives me something to both focus on and tune out.

My ASMR experience when it happens is a sort of dancing tingle right between my shoulder blades. Almost like a romantic partner softly trying to tickle me, but without it being strong enough to actually tickle.

Problem is that mine is triggered mostly by proximity. Growing up I was mostly familiar with it from going to the hairdresser or when a teacher would lean over my desk to go over some of my schoolwork. So all these wacky visuals and soft noises rarely set it off (I’ve had some luck, but it’s inconsistent). For a while I was convinced that I couldn’t get it from videos with any regularity because there’s always that barrier of the screen.

Recently I also came across Slight Sounds, and she’s the most consistent person I’ve ever seen in the medium. I think it’s because of how she plays with the camera, always bringing her hands up close. It’s able to trick my brain into seeing actual proximity or something.

Anyway, there’s a logical fallacy noted as Relative Privation. Also called Appeal to Worse Problems and “not as bad as” Fallacy. It basically goes “well yea, A is bad, but it’s not as bad as B is, so A doesn’t matter”. But suffering is suffering, regardless of the severity. Your pain is valid

Dude, we love ya, but see someone. Talk to someone in real life. I know there’s been times the last few years when I really could’ve used more support, and I appreciate that my sister really stepped up at the time, but even then it was rough. Not saying see a professional ( I haven’t, so I can’t really say), but really talk to someone. I’m sure the comic is kinda therapeutic for you, and we love it (I know its kind of therapeutic for a lot of us), but maybe its not enough. Maybe it even counterproductive sometimes. We need you healthy and balanced so you can do this for a long time. What would Nina say to you?

Life, the world drew first blood from you a long time ago, and has asked you to bleed over and over and over again. I think now you’re more than justified to declare war on life/the world and fight back.

I feel obliged to plug Aftynrose here. No particular reason beyond her being the only ASMRtist I find good enough to support, and she seems like a pretty cool person too.

That is correct. Her worst habit is being a perfectionist; she doesn’t want to record if everything isn’t just so, and even if she does, she won’t release vids if they aren’t good enough in her eyes. She’s been remodeling her basement and it’s been a huge interruption. But all that said, she never charges while she’s not making content. And she apologizes and feels bad for the delays. She’s flawed as a content creator but I respect her much as a person for that, and there’s no doubt she isn’t, you know, “another ethot preying on lonely men for an easy payday.” Hell, she even LOWERED her Patreon prices last year. She’s adorkable and honest, so that’s why I wanted to throw her name out there for anyone interested in ASMR (and she has a decent sized backlog to watch, even if nothing new has come out for a while).

I hate ASMR it makes me feel uncomfortable like in a nails on a chalkboard or on the back of those old bus seats from school. I cant listen to it for more than a few seconds.

I’ve never understood ASMR. I like ambient noise like rain or music for atmosphere sure, but the people whispering loudly is just irritating? I don’t know. It seems incredibly stupid to me, but whatever works for you I suppose.