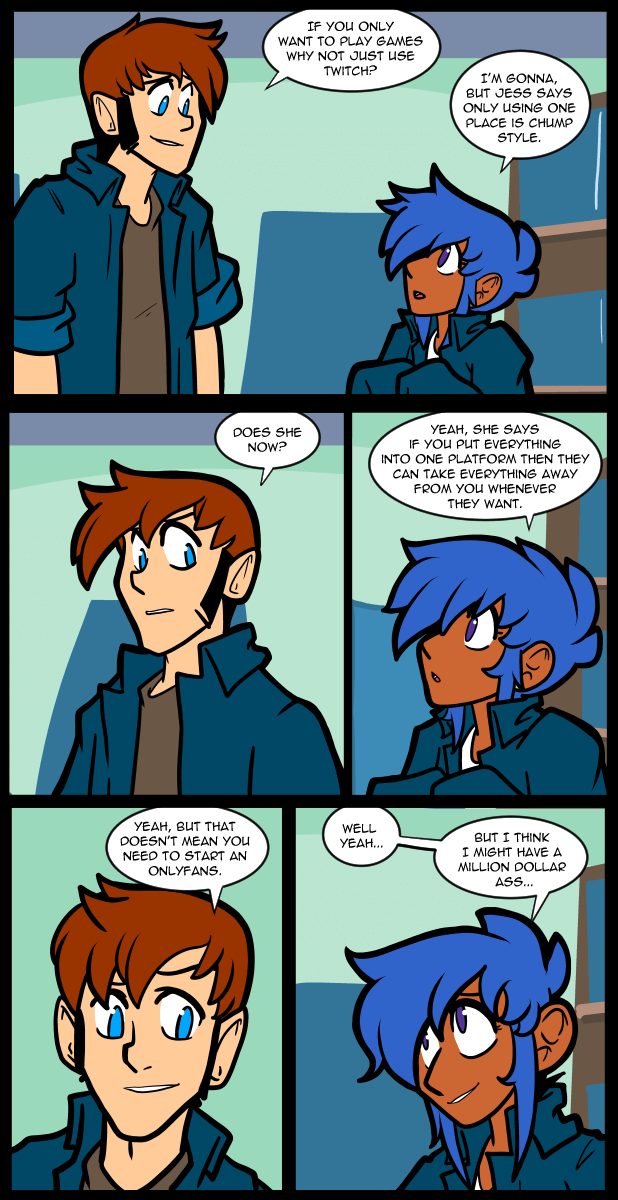 I feel so fucking shitty right now. Just gotta do a couple more things then I can sleep. I really appreciate you guys being supportive even though you don’t know what’s going on. I’m still going to keep updating with whatever I can throw together, but it’s nice to know I don’t have to. I feel like you guys have always supported me more than other creators because I take this seriously & don’t take time off every time something has disrupted my life. From basically adopting my cousin, to going to the hospital twice, & the years and years of misery that followed that experience, right up to now you’ve always been good to me. It means a lot to me.

My success has slowly surpassed almost every creator who used to be doing much better than me. It’s been a struggle for sure, but I take malicious pride in knowing I stood the test of time while others failed. There are some I will never surpass, but I’ve done well. Even though I had to sacrifice a lot to get to this point. For someone who has always felt like he was being laughed at it’s nice to have a mean chuckle once in a while. Sometimes it’s good to indulge the petty side of your nature. I think you guys reading this understand that the imperfect can still be good. You have enough love even for someone who is true neutral to chaotic good. XD

Deep breaths, slow motions and determination. You have this, we support you, don’t rush and just take it as it comes. We will wait for you, please don’t worry.

Well, see, Jackie, I gotta disagree with you here. This is way above “thrown together” level. Character art, their voices and dialogue quality are at the same (great) level as ever. We’re getting what might end up not being a 100% canon interaction, but because your characters are so consistent, this gives us insight into Thomas and Jo just the same as any other comic.

Honestly, to me this is just an intermission, a snippet of another day either in the past or in the future. So much so that I think you could very well segue seamlessly back into the main continuity with this being a memory of Thomas or Jo if you wanted to.

All this is to say: how could we not support you when you yourself have been giving us so much for so long and so consistently? Even those of us who can’t contribute by pledging to Patreon or subscribestar right now (and hey, if you’re a fan and reading this, you should give it a thought!) are grateful and appreciate your dedication, no question about it. Through your comic, your writing and your blogging, you’ve been here for us for a while. The least we can do is show support and dedication back, however we can.

I hope your circumstances get better ASAP, and meanwhile that you’ve been able to deal with them as well as you ever can. Thanks for all the good times so far, and I hope many are yet to come to all of us.

You have my best wishes. Take your time and I hope things get better. I can always use this intermission time to go back and re-read, haven’t done that this year.

We all support you because you treat your art with both passion and responsibility. So many will have one or the other, and we’ll get boring dreck day after day, or wonders when the stars are right but nothing to really follow. You put yourself into your work and it’s so clear to us that your comic is your respite from a cruel world around you that it invites us to take shelter in it too. And it’s a comfort that many of us have come to enjoy.

And of course I really like your art, your characters, your stories, and your dialog.

I hope things get better for you. Keep up the great work.

I genuinely don’t mind if you miss a few days or feel like doing an easy side-story for a bit. Seems like you’ve got a lot on your plate, so a break of any kind is 100% OK.
This “Jonlyfans” side-story is amusing, and seems like the kind of banter that my own comrades in retail engage in, so I’m enjoying the ride.
I’ve got a folder in my comics bookmarks for “on hiatus/dormant” that I still check every now and then, so if you do decide to take a break, I’m unlikely to miss when you come back by very long.

And btw on the business side, why not make some JonlyFans exclusives for your subscribers? Or put it on the todo-list, of course. Then follow up with MST3K commentaries on the same by the gang the month after.

As far as what you have “just thrown together”, a seasoned fan of your work could totally see Thomas and Jo bantering like this because they absolutely have that kind of dynamic. I would not be surprised if this interlude makes its way into the story canon somewhere along the way.

But still, as far as fixing your shit goes, take whatever time you need to. I know that, especially now, things are going tough, and whatever it is you are going through, I hope you come out on top (or at least burst out of its chest, like in Alien).

Take your time; get it right.

You say sacrifice, I say investment. Success doesn’t come from nowhere. Even if it is taking advantage of circumstances in the moment, that is still opening one door and closing others. Focusing on one skill set over others. Taking on job over another. Pursuing one relationship over others. All of these things are/were investments into whatever becomes our reality. If you look at the TopWebComics vote button you can see tons of comics, some of them quite good, that didn’t have Jackie’s staying power.

Hey, do you have a PayPal address I can do a subscription to?

I’d use Patreon, but their changes a while back pissed me off enough to leave their platform. I’ve got a couple of other creators I’m supporting via PayPal, so I know that’s a possibility.

The RSS tab has a subscription thingy with a bunch of options. As far as I know it still works.

“I feel like you guys have always supported me more than other creators because I take this seriously & don’t take time off every time something has disrupted my life.”

Yes, pretty much. “Regular updates” are among the last words you see in connection with a webcomic artist’s career. Just ask any Dead Winter reader. Or Shotgun Shuffle. Or most anyone else. Their stories are wonderful, their art sometimes downright amazing, but you can never actually count on an update showing up anywhere near where it should.

Between Failures, though, updates with almost mechanical regularity. So when something goes truly wrong, a LOT more slack is ready to be cut. It’s easy to fault the guy who vanishes for weeks at a time and gives some half-hearted update about how life got in the way. It’s another matter altogether to fault the guy who’s in every day at almost the same time.

And on another note, I’m genuinely surprised that the obviously shy Brooksie is willing to promote her backside online. I figured the concept would have her hiding under the bed in terror.

I confirm that I would pay $1 million+ for Jo’s ass.