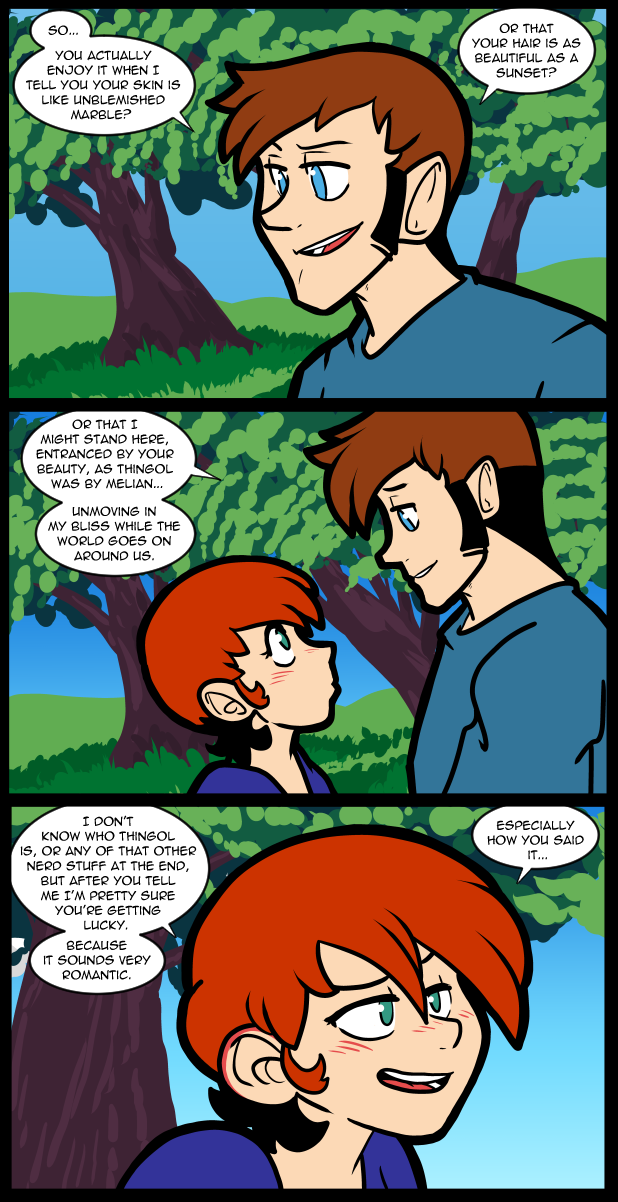 The dumb nerd stuff Thomas is referencing is from the Simlarillion by Tolkien. Thingol was an elf king who chanced upon a literal angel in the woods. They both fell instantly in love and stood, transfixed, for years, looking at one another. Since they were both immortal beings it didn’t matter too much if they just stood around for a century being DTF. Thingol married this angelic being, named Melian, and sired Luthien who was the… great, great, great (?) grandmother of Arwen. I think. Anyway, if you love ridiculously romantic nonsense, which both Carol and I do, (although admitting it might be harder to get her to do) this is like emotional catnip.
The other elves thought this fucker was lost forever while he was taking the ultimate leer as who was agreed to be the most beautiful being who ever existed in Middle Earth. So I guess he can be forgiven. He must have been hot stuff too since she was having an epic leer as well.

Kind of goofy on a logical level, but that’s fairly stories for you.

I think we’re on the verge of Super Sexy Fun Time!

As a massive Tolkien nerd, this is officially my favorite comic page ever produced.

Always down for a Silmarillion reference, right on

Just finished listening to an audio book of The Silmarillion in time for it to be referenced in one of my favourite welcoming. Fate is freaky some times.

“Auto-correct, stop messing with my curs words, you mother forklift!” (wrongcards.com, I think)

Ja, that Thingol/Melian comment is basically the ultimate compliment.

if he has to step up still, she will be Luthien who’s very visage healed him in while his soul was Barren, returning life when all was shadow

Carol every time Thomas talks: ”I like your funny words, Magic Man!”

If I remember correctly Tolkien had his and his wife’s grave stone marked as Thingol and Melain. The story was written for her and was his love letter to her. So that was his way of showing his undying love for her, because he knew that the book would go on after he was gone and his love for her would never fade from this world.

And that is why you will always have my respect good sir.

I always found it ironic that Thingol had managed to win the heart of a superior being, but was down on Beren for trying the same thing with Thingol’s daughter … which is fairly typical dad behaviour I guess.

I don’t remember an agent Smith kn Middle Earth. What does this refer to?

Hypocrisy is a parental trait, unfortunately.

I always thought of it more as: “Don’t make my mistakes. There’s plenty of time for you to make your own!”

I don’t see it that way. I just look at it as a double standard established by an arbitrary hierarchy in the name of respect.

Being a parent means setting an example, even if the example requires you to go against your own inner demons to make your child a better function of society. Something parents still need to understand.

Actually, in the books, Elrond wasn’t entirely against the Union. It was more “you need to get rid of Sauron so this doesn’t become a huge waste of time. Otherwise, we cool.”

Okay, I would have had to ask Spousal ValdVin about those names.

All I know is that Thomas’ expression is 200% sincere in panel two and she is eating this up thoroughly, as she should.

My nerd cred isn’t high enough level to have understood that at first glance. I read the Silmarillion, but I was like 15; so really I didn’t get much from it. I honestly though this was about that musician who played music so beautiful he convinced the rulers of the underworld to give him a silmaril (if I’m even remembering THAT correctly), and that “Thingol” was a half-remembered name – like Whosit or Whatsisface. That’s a pretty great reference though, seriously.

“Your legs look like two rolling pins, rolling in pizza dough….”
-from a cartoon from Mr.Vaughn Bode.

(This line was said by a lizard. This lizard maybe was in the 1970, printed cartoon or comic strip- Cheech Wizard.)