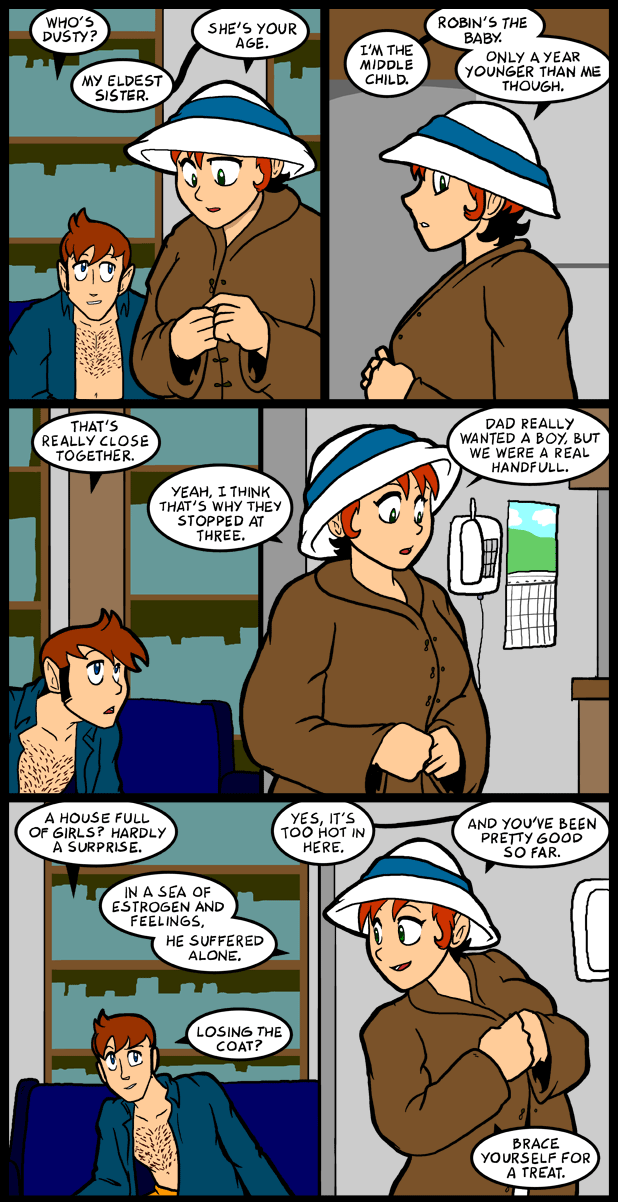 I was having a really strange dream when I woke up, but the sound of wind caused me to forget it. I just have this knowledge that is was a fucked up dream and that’s it. The wind that woke me up was quite strong. It’s torn up a lot of stuff around here. Such as the power pole in my parent’s back yard. It’s also kicked up a huge amount of dust. It’s super dry around here and it’s come close to being a full on dust storm a few times today. Even inside the house there’s a thin layer of dust on everything. Not regular house dust. Gritty outside dust. Plus, you can smell it. Every breath pulls moisture from your lungs. It’s unpleasant.

I never did find those sketch cards. Tore up everything looking for them. So you pony fans will likely be getting pages from my sketchbooks instead. I have other paper around, but I don’t like it. I’m gonna box it all up and send it to other artists because we are all poor and should share.

The other night I saw someone call the John Carter movie Star Wars for a new generation. Here’s the thing: it just isn’t. That phrase is trotted out every few years and it’s always for some movie that has no business being associated with Star Wars. And I’m not saying Star Wars is fine art, or anything. It absolutely isn’t. At some points it’s genuinely terrible, but it’s still apart from other things in the way it changed movies.

The last time I heard that phrase it was because of The 5th Element. While it is a gloriously terrible movie it’s hardly worthy of being compared to Star Wars. It’s practically a romantic comedy, and certainly more a deconstruction of the genre than an earnest attempt at it.

She’s either starkers or in a bikini.

Playing on today’s title, and what everybody hopes is coming:

My college roommate would say, “Anything more than a handful is a waste/”

I would argue back “Anything more than a handful is wonderful.”

I agree with your roommate, only when using the following picture to visualize “a handful.”

Boobs are for heads more than hands.

She’s got something on under the coat. The top edge of it is visible in one panel last strip.

Wow. You noticed that little tiny piece of white where her cleavage should be? You have the eye sight of an eagle

I noticed that no problem, and i’m half blind. even with visual aids. it was actually kinda noticable. At least in a specific panel. And more to the point; there’s more hints than that. “It has EVERYTHING to do with the hat” remember?

None of the things anyone has guessed so far has had -anything- to do with that hat. Just what they wanna see. …not that there’s anything wrong with that. Heh.

You’re right. Further, it’s outlined in black. It’s below the uppermost fastener (button? toggle? frog?) on her coat. BTW, anyone else notice how that top fastener became unfastened during the course of that strip?

John Carter though is the inspiration for George Lucas’s creation of star wars.

John Carter is the film version of the Edgar Rice Burroughs (you know the guy who did the Tarzan books) Princess of Mars . Princess of Mars in fact the entire Barsoom series was the inspiration for the vast majority of sci fi films, books, tv series, comic books over the last eighty years. The novel first came out as a magazine serial in 1912 and was first published as a complete novel in 1917. The barsoom series has sold over a billion books worldwide making it one of the most published book series of all time.

You know how DC has, green martians, white martians in their comic books with Martian Manhunter being green? Thanks Edgar Rice Burroughs for that.

Well you can thank Mr. Burroughs, on my behalf, for nothing then.

Beat me to it. Those novels were the first sci-fi books I ever read.

The Martian Chronicles were my first big foray into SciFi, and i’ve got to say, that with very few exceptions, I liked every book more than star wars.

Chessmen of mars didn’t capture my attention very well, but by and large they were fantastic books.

one of my friends is the oldest of four boys. his mom is amazing for dealing with 5 guys in the house, especially because the sons are always hyperactive.

I hate forgetting dreams, it always seems like I left the stove on or something for the first 5 minutes after waking up.

As for the names, I have made this discovery;

Everyone in the pattern has the letters “A, L, and E” appearing somewhere in their full names.

Now, I’m absolutely positive this is the wrong track, but it’s what I’ve come up with so far.

Whoops, Reggie has no L.

Shoot, back to square zero.

Yeah, that’s not right at all. You’re going in the wrong direction with your thought process.

My money is on… Frilly bra and panties, both white… And those things they have attached to their legs at weddings… oh gosh the name escapes me.

You’re thinking of a garter. I have trouble remembering nouns all the time; glad I’m not the only one.

“And those things they have attached to their legs at weddings…
”

John Carter can’t be the new Star Wars because John Carter was invented as a character, and Borroughs started writing the books, in 1912. Star Wars didn’t come out until 65 years later. John Carter is old enough to be George Lucas’ dad.

Folks, don’t blame Edgar Rice Burroughs if John Carter sucks, blame Disney. I can’t think of a single book they’ve adapted to the screen that they haven’t completely perverted. Even Bambi and Pinocchio were chopped to bits and rehashed like so much sausage.

Well you know, you can’t expect a movie to be the same as the book it’s based on. Unless that’s the entire idea. So, unless they oficially use the book as the absolute script, it’s gonna be diffrent. And that’s honestly how it’s got to be, when you think about it. They’re each a very diffrent type of Medium. A book has much more space to work on and relies alot diffrently on our imagination. They have diffrent tricks and diffrent pacing. It’s all just… diffrent from each other. So you know, you gotta keep that in mind. Yeah, you shouldn’t blame the writer if the movie sucks. Heck, you should think of the movie as an entierly diffrent take on the story.

I’m with you on the “X is the new Star Wars” thing. People seem to forget what made Star Wars what it was in the first place.

The original Star Wars was a big deal because at the time it came out, science fiction and fantasy films were at an all time low. For a long time the genre had been dwindling, and with rare exceptions had pretty much always been seen as cheap B-movie material and nothing more. Special effects technology in general was similarly ghettoized (look ma, I made a word!), and had been all but stagnant for over a decade.

Suddenly this movie comes out of nowhere that has a huge classical fantasy story crammed wall to wall with convincing world building detail and what was at the time hugely groundbreaking special effects. It was a big leap, not just in one aspect, but in many, and no one had seen anything like it before or even guessed that such a thing was even possible.

Remember when Jurassic Park came out, and what a sudden, completely out of nowhere gigantic technical leap CG creature effects seemed to be? Imagine if it had been Avatar that came out then, instead of Jurassic Park. The same Avatar that came out in 2009, with no backdated FX or anything. That’s what it was like… almost: ambitious, world building, FX driven sci-fi was nothing strange in 1993 either… thanks to Star Wars.

On the business side, it completely changed a lot in the film industry. Suddenly these trash genres that no one but the Ed Wood types took seriously became a real viable thing worth investing in. Suddenly special effects were worth real money, and technological development exploded. It drastically changed how movies are made, marketed, distributed, and thanks to GL’s foresight, merchandised.

Star Wars was a giant meteorite that permanently changed the artistic and business landscape of cinema and pop culture. The closest thing to a “this generation’s Star Wars” would IMO be the LOTR trilogy or The Matrix, but even those don’t come anywhere near the kind of impact “Star Wars” had.

That’s what I’m tryin’ to say.

Speaking of “bad” names, I really wanted to give one of my kids the middle name Effin, but my fiancee isn’t down for that.

Just finished going through the archives. Love the comic, love the art, the story, the characters, everything. This is deffinitly going onto my fav list. I also haven’t looked through the comments that closely so I don’t know if you’ve answered this, but whose your fav pony?

Thanks for taking the plunge. I appreciate it.

It’s not an easy choice, but I’m going to say Twilight Sparkle.