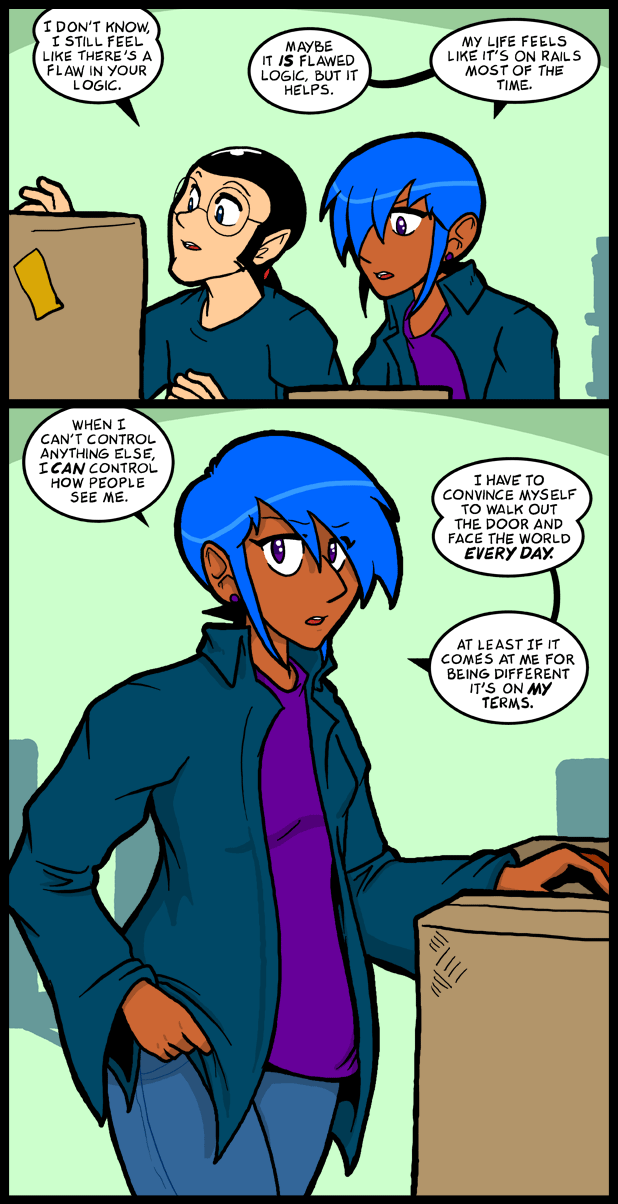 I hated to cut the dialog up in such a way that the result was this page, but every other version lacked the impact of just having two panels.  So I made one panel really big.

I saw Batman: Year One the other day.  It was the first DC animated feature that I wasn’t particularly impressed by.  I read at least part of the comic it’s based on, and it seemed like it was very true to the source material, but there wasn’t much Batman.  It should have been called Jim Gordon: Year One, with some Batman and even less Catwoman.  Honestly, the whole thing with Catwoman seemed completely unnecessary.  It didn’t add a thing to the narrative.  Someone told me that they were setting up a Catwoman story with it, but I felt like it just didn’t work very well.  Either it needed way more Catwoman, or none at all.  I really didn’t;t care for the portrayal of Batman/Bruce Wayne either.  It just didn’t work for me.  Honestly the best part of the story was all the Jim Gordon stuff.  The tale of police corruption and the reluctant cop who sees a chance to make a difference, but doesn’t really want to take it, is compelling.

Batman: The Long Halloween is a similar story, and better told, in my opinion.  It has a few parts that parallel Year One.  In fact, I’m not sure the two don’t contradict each other.  The Catwoman portions of the story seem very similar in my memory.  I’m pretty sure her encounter with…  the Roman (?) ends the same way.  I don’t know.  It can’t be a year one story because Batman already has an asylum full of bad guys by that point.  Minus Two-Face.  Long Halloween contains Two-Face’s origin story now that I think about it.  a version of it anyway.  Dark Victory is Robin’s origin, which followed at some point after.  There might have been some story overlap with Year One in that too.  I haven’t read them in ages.

I don’t know, Year One isn’t terrible by any means.  It’s just the least best Batman movie in the last few years.  Although I haven’t seen that collection of shorts that came out before the live action reboot.  I should just rent it because I can’t image I’d want to own it.  I don’t really like the Bale Batman era stuff, and it feels like that DVD would follow that line.

That’s the best way to take on the world.

I don’t know if I want to watch Year One unless I knew they were going to adapt the other two stories as well.

Year One was….alright, I agree. I still enjoyed the Jim Gordon parts though.

I still remember Under The Red Hood, now that one, I thoroughly enjoyed.

The dialog may be short but I think the trade for a nice full shot of Jo is a trade in us the fans favor.

Forget the brevity of the dialogue. The stiffened on-edge shoulders, the hand in mute mild defiance on her hip, the lightly furrowed brow, the part-lidded stern eyes all complement her written mixed tone of irritation, defiance and determination. This tells us far more about her character than a wordwall would. Well done.

Has anyone else noticed that Ed has shiny and remarkably smooth hair?

I haven’t watched Year One yet. For me, the worst one was… Public Enemies, I think. It was hilariously bad. I completely agree with this review about how very gay it is: http://teentemplars.blogspot.com/2011/01/supermanbatman-public-enemies-review.html
Or this also funny review which talks about how very much Supes and Bats are the best friends in the world (if only it weren’t for that damned Lois Lane they could be so much more!). It does have spoilers but, seriously? This movie is garbage. Go ahead and spoil it. http://robot6.comicbookresources.com/2009/09/just-say-no-kal-el-a-review-of-supermanbatman-public-enemies/

The Anthology is good and I really enjoyed it but it was odd to hear Kevin Conroy reprising his role when the animation tended to look like a younger batman. I love Kevin Conroy but his grizzled old voice stuck out like a sore thumb in one story in particular. The rest, if I remember right, turned out fine, I think.
Also, they kept using Will Friedle as different voices. Yes, love Will Friedle, too, but it’s distracting to hear his voice in a Batman cartoon and not have him be Terry McGinnis.
At any rate, it was really good and you should check it out. I do love me some anthologies, though, so I might be biased. :)

Hey, what do you know, people HAVE read my blog! Yay!

Seriously, I’m glad you enjoyed it, and thanks for the shout out. For what it’s worth, of the ones I’ve seen, I felt that Public Enemies was the weakest.

Oh, man. I just found this comic, and I love it. This is possibly my favorite page. I can definitely relate to Brooksie.

This one resonates with a lot of people, myself included.

This reminds me of when I tried to explain to my psychiatrist why wearing a kilt every day helped me overcome social anxiety.

I would swoon. and I’m a dude.
I mean yeah, for some reason, regardless of how a persons natural hair looks, I prefer natural.
but Jolene… I’m fucking smitten. hair like that just makes me want to hold her tight and kiss her forehead, eyes like those… just another reason to stare into those beautiful pools of loveliness.

Not that she needs me to tell her. ;)