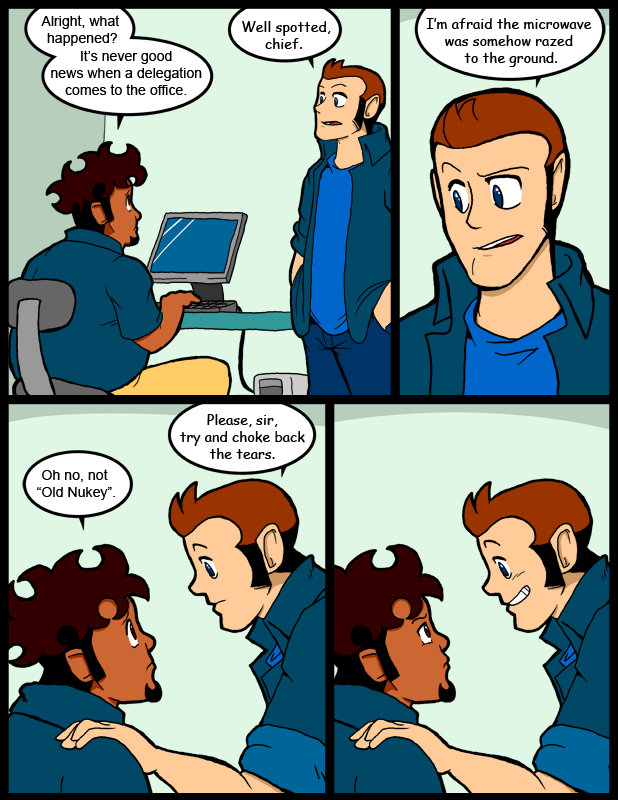 Lots of bad weather around today.  Anyone who saw my tweets would know that I spent a little time in the basement waiting them out.  It wasn’t ever a big deal to go down there before, but some kind of mold is growing there now that I’m very allergic to, so if I spend even a few moments there I start having trouble breathing.  So it’s kind of a no win situation.  Get killed by high winds, or slowly suffocate.  Allergy medicine takes the edge off, but doesn’t fix it.  Still, labored breathing is easier to fix than a 2 x 4 through the skull, so I takes my chances with he mold.

There’s a lot of places in the Midwest where apartments and stuff have no storm shelters.  I think that’s dumb because wind is about the only thing that can kill you out there.  I have no idea why a state like Kansas, where they are very concerned about not teaching evolution in schools, hasn’t legislated mandatory shelters for all structures.   It seems like their priorities are a bit skewed.  Which is not to say that Kansas is the only state with skewed priorities.  I just happened to have lived their long enough to appreciate the fine, aged, taste of their particular brand of stupidity.

I worked at a store where their policy, in the event of a tornado, was to lock the doors and have everyone stand in the receiving room.  The building was made of tin and cinder blocks, so a tornado would rip through it with little effort.  I think the policy was a plan to keep the corpses all in one place for easier identification.  I don’t know what it costs to dig a shelter, but apparently it’s more than a human life is worth.

I dont know anybody with a basement for their house in my area. I think it’s because the ground in my area shifts too much. Some places such as colleges and stores have them though. In school we were taught to get into the hallway on the 1st floor and “duck and cover” against the lockers.

Huh..you’d think they’d make you hide somewhere more secure than that. I wouldn’t know much about weather there. Since I live in a place where there’s heat, dust and flash floods.

Glad I live in England, where the weather alternates between dull and boring.

as soon as I saw your comment, I started thinking of a certain quote from Snatch O_O

It’s more one of those things that goes like “Oh hay, I should dig a storm shelter for when the winds start a blowin! Buuuuut I don’t see any wind right now. So I’ll do it later.”

Also: You should devastate that mold with bleach, and learn it some respect.

I think a good bit of wrathful weather is healthy, that said the most traumatic weather I’ve experienced was hailstones that annoyingly stung my ears. Little scallywags!

Before Media Play closed down, they had a policy that all customers were to leave the store during a tornado watch or warning…. I was thrown out of a store into a violent thunderstorm on one occasion. I wonder why they went under?

Yeah, you need to kill that mold dead, before it takes over and gains sentience. Or ruins your health. Either one of those would be bad.

I’m glad I live in California where the tornadoes are exceedingly rare. We just have the occasional violent shaking and wildfires.

Also, that last frame is hilarious.

Gee I must be lucky. I have experienced nearly every natural disaster that can occur on a major landmass. Wildfire, Hurricane, tornado, flood, flash flood, drought, blizzard, Ice storm and earthquake. Think I should move to an island so that I can add Tsunami to my resume? Oooo I know move to Hawaii so I can add volcanoe too!

And yeah go all death by bleach on that mold.

Yeah, you wouldn’t want the mold becoming a … lawyer!

Who nicknames their microwave? Hilarious

Up here in Joisey it’s no better; we don’t get tornados, but the hurricanes.